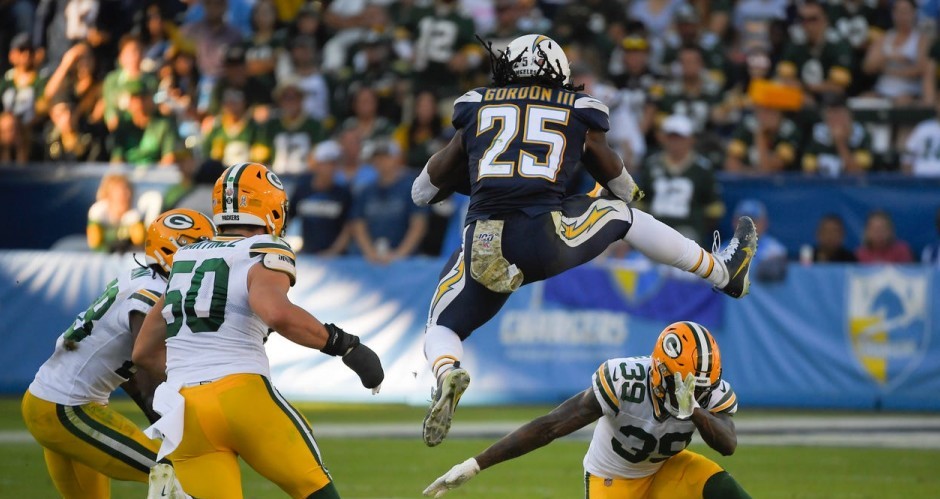 A long time ago, in a galaxy far, far away – Carson, California, to be exact – the Los Angeles Chargers were once considered a lock to make the playoffs and seemed poised for a deep postseason run given their multitude of talent on both sides of the ball. Eight weeks into the season, however, sitting on a head-scratching 3-5 record, it was quite evident that there needed to be a change in order to restore order to the galaxy. The offense had been anemic on a weekly basis, Pro Bowl running back, Melvin Gordon, had seemingly lost his way, and the Evil Emperor, Ken Whisenhunt, was devoid of anything remotely creative or innovative in his offensive play calling. Alas, a spark was desperately needed, and that’s exactly what occurred on Sunday afternoon with the visiting 7-1 Packers from the NFC North in town. A change in the offensive play calling responsibilities earlier in the week from Whisenhunt to Shane Steichen, Melvin Gordon returning to his old form, and a long overdue stout defensive performance from the Chargers’ injury maligned defense – you might just say Sunday’s win over the Packers brings with it…. A New Hope.

Shane Steichen, the Chargers’ quarterbacks coach for the last three seasons, was named the new offensive coordinator earlier in the week when the team parted ways with the long tenured, Ken Whisenhunt.  In his first game as offensive coordinator of the Chargers, Steichen employed a relatively balanced ground game which featured Melvin Gordon running the ball 20 times for 80 yards and 2 touchdowns, and Austin Ekeler carrying the ball 12 times for 70 yards. Additionally, the duo accounted for 7 catches and over 50 yards in the air. With the ground game being successful, the Chargers were able to control the tempo of the game, but perhaps more importantly were able to keep the ball out of Aaron Rodgers’ hands.

For the first time this season, with the ground game truly being successful, Philip Rivers was able to sit back in the pocket and carve up Green Bay’s defense with surgical precision. The veteran quarterback was 21 for 28 on the day, with 294 yards passing. For a second consecutive week, Rivers heavily targeted the talented trio of weapons: receivers Keenan Allen and Mike Williams, and tight end, Hunter Henry. Henry, in particular, had a big day with 7 receptions while Williams gave the team a much needed deep threat with 3 catches for 111 yards.

Perhaps the most noteworthy stat of the game – and arguably the most welcome sight for Chargers fans – is that the defense held Aaron Rodgers to just 161 yards passing on the day. Additionally, and perhaps most shockingly, the high powered Green Bay offense was shutout in the first half. Joey Bosa was sensational once again. In the last three weeks, Bosa has five and a half sacks, 17 combined tackles and one forced fumble. Bosa, alongside pass rusher Melvin Ingram, wreaked havoc on Rodgers all game long.

It appears the Chargers are starting to get healthy at just the right time. With Russell Okung (OT) back with the offense and Melvin Ingram returning to the defensive side of the ball, the Chargers are still anxiously awaiting the return of safety, Derwin James. It will be interesting to see how Steichen and the offense look next week against a very porous Raiders defense, and if Bosa and the defense can make life difficult for Raiders quarterback, Derek Carr.