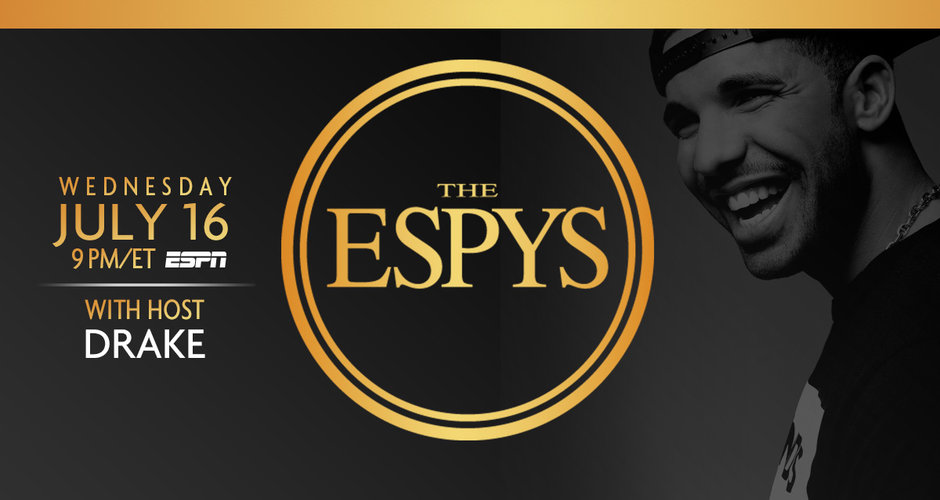 No socks? Socks? Hint of orange in the suit? Which pair of shoes? Look out, words like “iridescent” are being tossed around and the Hollywood theatrical ensemble has congregated with more stock invested in wardrobes than anything else. No, we’re not on the set of The Great Gatsby or at a GQ photo shoot, but by every measure, the ESPYS sure seems to be the fad of 2014. Lakers’ Nick Young is our fashion appraiser and the Quicksilver 360 camera is a style carousel; spinning to capture all angles of each celebrities most elegant attire. Combine all of this with renown host Drake, the side comments of Bill Simmons, and what you have is a prescription for an evening of unadulterated laughter.

On a serious note, the ESPYS Countdown Show was a near perfect prelude to the earnestness of the night’s journey. Why do we celebrate the ESPYS year after year? He receives an award, she receives the next, they won the best performance; blah-blah-blah. But that is exactly it. The gleaming trophies, dramatized outfits, and rehearsed charades masquerade something organic about the entire spectacle. Like the process of a chemical reaction, that SOMETHING about the occasion has been gradually transforming more with each year passing. Not in a vogue sense, that something is EXCELLENCE.

How do we pinpoint “excellence”? Do our definitions of “excellence” ever change or does “excellence” boil down to different athletes performing, at elite levels, over time? Chris Berman said, “you had [Jack] Nicklaus to Tiger [Woods] to [Bubba] Watson, Jimmy Craig looking for his father, Jared Zabransky and company winning it for Boise here, the [Adam] Vinatieri field goal, all are fantastic finishes.” And when Berman spiraled off on that historical tangent during countdown, he wasn’t just recounting fantastic finishes. On all accounts, Berman was offering us reflections of excellence transcending through the ages.

Let’s put this into perspective, Peyton Manning accepted his ESPY for “Record-Breaking Performance” last night. Manning statistically dismantled every opponent last fall. The easiest way to clarify #18’s feat, Manning put up video game-numbers; statistics we’ve yet to see before. Several years earlier you saw “Brady to Moss: The Unstoppable Toss” pave way for a 50 passing touchdown season and an unblemished regular season record (16-0). ‘Omaha’ broke Brady’s passing TD record, Brees’ passing yards record, and continues his skirmish with father time in hopes of grabbing ring number two. We kept asking “Could those records be broken?” “Would they ever be broken?” So, we marvel at Manning’s records, see him through as a recipient of last night’s ESPY, but was his statistical showcase the NFL’s most excellent? Was he the most excellent we’ve ever seen?

Meanwhile, KD (Kevin Durant) finally secured NBA MVP in addition to surpassing Jordan’s points streak record this past season. In the end, KD took home “Best Male Athlete” at the ESPY Awards. Wait, he passed Jordan? I mean Michael is the air assailant, the G.O.A.T. (Greatest Of All Time), Air Jordan! Never mind playing in LBJ (Lebron James)’s wake year after year, but passing Michael Jordan! Oh, and you can’t forget his ESPY for “Best NBA Player”. Is that the final say? Was Kevin Durant’s tenacious performance and trumping of Jordan’s record the highest form of excellence witnessed ever in the NBA?

Here’s a better question: Is Ronda Rousey’s destruction of her opponents in the UFC bantamweight the most superior accomplishment our eyes have viewed in women’s fighting? Look here, BAM! Lights out. Ask Alexis Davis what I mean. Whether she’s annihilating her opponent in 16-seconds, 8-seconds, does it matter? Rousey’s accrued a win streak, ending fight’s faster than almost anyone we’ve ever known. Well, ask Floyd Mayweather if he know’s Ronda because he doesn’t, but still, her slaughter-fest is unheard of. Is Ronda IT? Is she the eminent dictator of women’s fighting, an excellence reserved for NOW and now only? Bar none?

We ask questions. We wonder. Sometimes we can’t ever get over the notion that these athletic achievements might be IT. This gathering called the ESPYS may just feature the best we’ve ever seen. We don’t have a crystal ball to see what lies ahead in sports nor can we summon a prophet to unveil omega. These crushing slam-dunks, match points, gridiron comebacks may be the most excellent outings of all time. The point here is to recognize the trajectory of what we’ve classified as “excellent” year after year. Our definition of “excellence” is predicated upon performance, and since athletes are always competing to outdo each other, the faces of excellence transform with each decade, year, month or day.

Stuart Scott was honored with the Jimmy V award last night. “Never give up” was ringing in everyone’s ears. Fighting cancer on everyone’s mind. When Stuart spoke, 10 words of his exemplified what the entire night on the red carpet meant. “Our lives journey is about the people who touch us.” Photographs of Stuart hugging his daughter flashed across the screen. Let me reiterate that, “. . .it is about the people who touch us.” The people that came before us. People here in the now. Families standing alongside each other. Humans who personally touched our lives; our hearts. That was the ESPYS. It was an assembly of players, coaches, families, friends; all of whom have drawn influence from each other and those who preceded them. People impacting other people’s lives. Elaborate outfits, excessive bling, and all the clamor was for the cameras sake.

A look at Stewart’s Journey:

Excellence isn’t 50+ touchdowns, the number of match knockouts or incalculable double-doubles cumulated over the course of a season. Sure, we love seeing records being broken and our favorite athletes become hypertrophies on the big stage. But excellence is about “the journey”, “the people who touch us”. Excellence arrives in different capacities, and is sure to break the occasional record. Athletes learn from each other. They study the gods of basketball, titans of tennis, and ice brutes who have excelled over the ages. Excellence is an overshadowing of the human will. A will that strives to defy what we’ve already seen in sports to present us with something new; be it in the form of a new record or act of courage. Stuart Scott’s will to press on is excellent. Josh Sweeney’s will and exemplary service to fulfill new goals is excellent. Gregg Popovich’s will to routinely coach the Spurs to new heights is excellent. And the collection of athletes who touched the hearts of fans, learned from the best in the business before them, but still challenge each other to set the bar higher every year is excellent.

In a lot of ways, the ESPYS reminds us of a scene from Gavin O’Connor’s movie Miracle. Herb Brooks looks at Jim Craig and says, “Have you given me your very best? Because I know there’s a lot more in you, a whole other level that for some reason you don’t want to go to.” The fact of the matter is that like Herb, we ask, “Have these athletes given us their very best?” The athletes, likewise, pose that question to themselves. Is this the most excellent we will ever see? The human will knows no bounds. Just when we thought we saw the best, another group of athletes come along to set a new ultimatum for the era. Whether your in the NBA, NFL, MLB, NHL, MLS, PGA or UFC brigade, new levels of excellence are being reached because of the human will. Are you willing to touch the hearts of others, venture down an avenue of excellence, and excel as an influence on the world with your greatest passion? They are the descendants of excellence, disciples of their respective sports, the players who refined their practices and imported their will into the games they love. The ESPYS, it’s the comeuppance and acknowledgement of the human will. Tests of the human will to redefine the sports we know, now that my friends is true excellence.