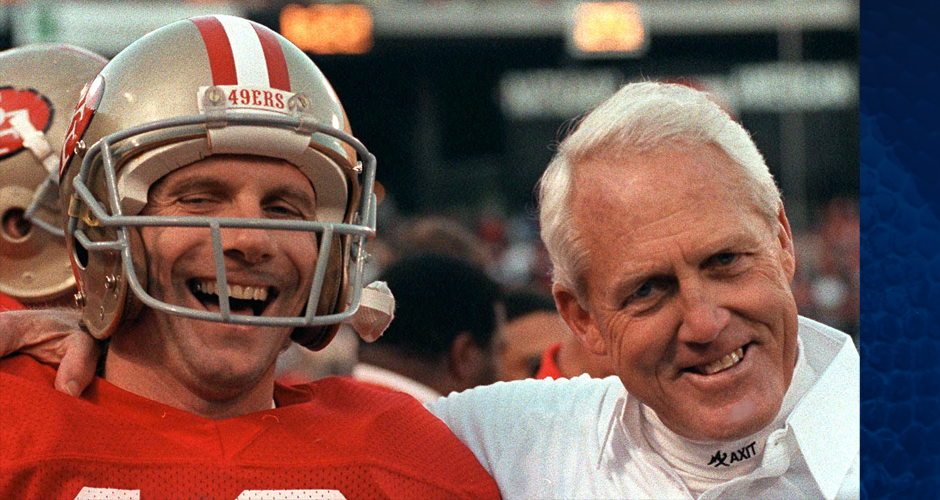 By now, everyone knows the story. The 49ers new head coach, hired from Stanford, drafted a quarterback in his first draft, although he didn’t have to use a first round draft pick, he got the man he wanted.  Midway through their second season together, the quarterback earned the starting job, ultimately leading the team to the Super Bowl.

Except that I’m not talking about the 2012 49ers.  The events I’m describing happened over three decades ago… At least, that was the first time they happened.  There are many similarities between the two stories that give 49ers fans a reason to hope that the future might be as bright as the past.  And that’s good news for a team that spend most of the last decade looking back at their glory years.

The first time around, it was still a new head coach out of Stanford, but this time it was 1979 and the new coach was future Hall of Fame coach Bill Walsh.  The situation Walsh walked into was a little more dire than the one that Jim Harbaugh inherited in 2011, but only a little.  Harbaugh famously took the 6-10 squad from 2010 and, without significant roster changes, went 13-3 in his first season as head coach.  There was a lot of hidden talent on that team.

Walsh inherited a team that was laughably bad at 2-14 in 1978, and in 1979, the genius head coach he went… 2-14 again.  Fortunately, coaches got a little more leeway in those days.  The 1978 team had scored the fewest points in the league, and set an NFL record with 63 turnovers.  The 1979 team showed promise, but wasn’t quite there yet.  They actually set a different mark for futility as they became the only team in NFL history to lost 12 games in which they held a lead at some point.

Walsh wanted to install his now famous West Coast Offense, which uses a short, precise passing game to open up the running lanes.  He needed a precise trigger man to run that offense and, like Harbaugh, in Walsh’s first draft he found him.  With the 82nd pick overall, in the third round, Walsh picked future Hall-of-Famer Joe Montana out of Notre Dame.

Just like Kaepernick, in Montana’s second year he earned the starting job.  That season, the 49ers would improve to 6-10.  It took one more season to finish revamping the team and make it to the promised land.  In 1981, the 49ers finished 13-3 (just like in Harbaugh’s second season) and they made it to the NFC Championship Game, where Montana was responsible for connecting with Dwight Clark in The Catch to beat the Cowboys with 37 seconds left to go to the Super Bowl.

The 1981 San Francisco 49ers marked the first year of a dynasty.  Montana would go on to win 4 Super Bowls with the 49ers over the next 10 years, setting numerous records in the process.  Montana still holds the record for career passer rating in Super Bowls (for quarterbacks with more than one game), an astronomical 127.8.  In four games, he threw for 11 touchdowns and no interceptions, along with 1,142 passing yards.

Montana left some big shoes to fill.  Adding to the legacy, Montana’s successor was Hall-of-Famer Steve Young, who added a fifth Super Bowl title in 1994.  Young grabbed a little piece of history himself, throwing for a Super Bowl record six touchdowns in that game.  Young threw for 325 yards and rushed for another 49, making him the first player to ever lead a Super Bowl in both passing yards and rushing yards.  Kaepernick certainly isn’t the first San Francisco quarterback who knows how to run.

For the record, San Francisco’s two Hall of Fame quarterbacks are 5-0 in Super Bowls, and threw 17 touchdown passes and no interceptions in those games.

There are some very familiar elements to the story this season.  Colin Kaepernick is following in the footsteps of NFL legends, but so far this season, he has taken on every challenge that’s been put in front of him.  Super Bowl Sunday will reveal of Harbaugh and Kaepernick are worthy successors to Walsh and Montana, but so far they are well ahead of the curve.