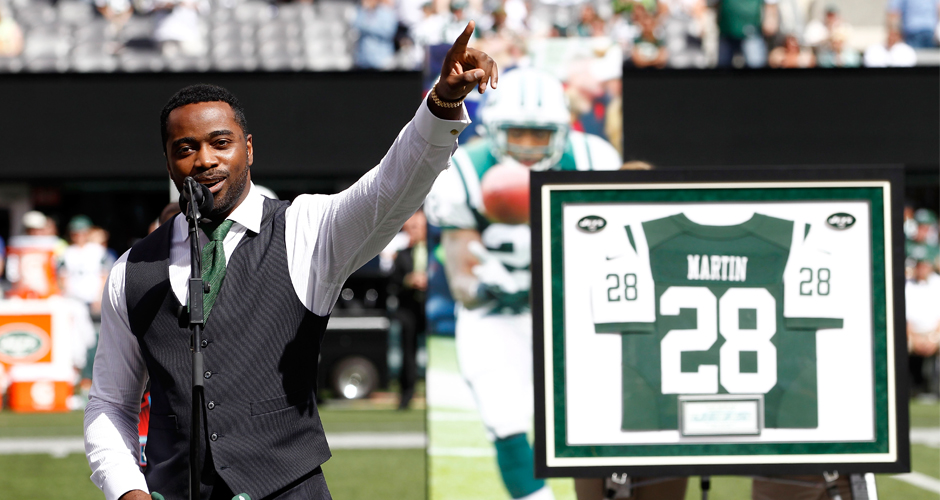 Curtis Martin never thought he would be in the Pro Football Hall of Fame; heck he never even expected to live as long as he has. Curtis Martin didn’t love the game of football, but football saved his life.

As Martin graced the stage without a written speech for his 2012 Hall of Fame induction, he expressed his feelings about football, his life and his family. Fans across the country heard this reserved man share raw emotion. Martin shared his life journey from the rough inner city of Pittsburgh, living with an abusive father and living in poverty amongst drugs and crime.

Curtis Martin began playing football in high school because his mother told him he needed to take part in an after school program that would help keep him out of the streets and essentially help keep him alive.

In Martin’s induction speech, he refers back to this time by stating what his mother had told him. “Curt, listen. Your grandmother’s gone. My sister’s gone. You’ve had so many brushes with death yourself, I’m just going to tell you this, Curt, I want you to do something after school.  It doesn’t matter what it is.  It could be football, baseball, basketball, join the glee club, join the band, whatever it may be. Just do something so you’re not in this neighborhood 24 hours a day, just take up two extra hours of your time.” She said, “Because if something happens to you, they might as well kill me too, because you’re the only thing that I’m living for.”

So he did, and he turned into one of high school’s best running backs with playing only one year of high school football, where he ran for 1,705 yards and 20 touchdowns. It was clear he had gift. Martin’s high school coach Mark Wittgartner said, “He had natural abilities far and above backs I had had before.”

When Martin finally decided to stay home and play football at the University of Pittsburgh, there was a lot of expectation for him to be a star. However, the injury bug plagued him for a couple years and was only relatively healthy for his junior season where he rushed for over 1,000 yards. Martin was then ready to make a huge splash in his senior season where he had 251 rushing yards against Texas in week one, and then was sidelined for the rest of the season due to an ankle injury.

Martin decided to forgo his final year of eligibility due to his injuries in college and entered into the NFL Draft in 1995. Many teams had reservations about his injury history, but in the third round, Martin got a call from New England’s head coach Bill Parcells.

“I can remember draft day like it was yesterday. My family and I were sitting around and were watching the draft. The phone rings and it’s Bill Parcells. I answer the phone and say “Hello,” and Parcells says, “Curtis, we want to know if you’re interested in being a New England Patriot?”  I said, “Yes, yes, sir.” And we hang up the phone. As soon as we hang up the phone I turn around to everyone and I said, “Oh my gosh, I do not want to play football,” said Martin during his speech.

However, Martin did end up playing football and it’s safe to say he was pretty good at it too.

On Martin’s first carry as an NFL running back he ran for 30 yards and never looked back. He finished the game with 102 yards and became the first Patriots rookie to rush for over 100 yards in their debut game. Martin went on to lead the AFC in rushing, finishing the season with 1,487 yards and 14 touchdowns. He was later named the Offensive Rookie of the Year, as well be named to the Pro Bowl.

He would repeat his rookie year success in his second year rushing again for over 1,000 yards and 14 touchdowns, and being selected to his second straight Pro Bowl.

In his first seven seasons with the Jets, Martin only missed one game, while rushing for over 1,000 yards in each of those seasons. He made an All Pro team twice and was selected to the Pro Bowl three times in his time with the Jets (3 All Pro and 5 Pro Bowls in his career). He also led the league in rushing in 2004 when he rushed for 1,697 yards and became the oldest player in history to do so.

Martin finished his career with over 14,000 rushing yards and 10 straight seasons with over 1,000 yards. He is currently the fourth leading rusher in NFL history. In 2012, Martin was selected to the Hall of Fame, and the Jets retired his number 28.

On the field, Curtis Martin he was one of the most consistent running backs of all time; game in and game out he gave his maximum effort. But his heart and his courage stem from his rough upbringing. Martin is a warrior and his hard work is one that most people only dream about having. Curtis Martin’s life could have gone a totally different way if his mother had not done her best to keep her son out of the streets. Football may not have been Martin’s biggest love, but it changed his life forever.