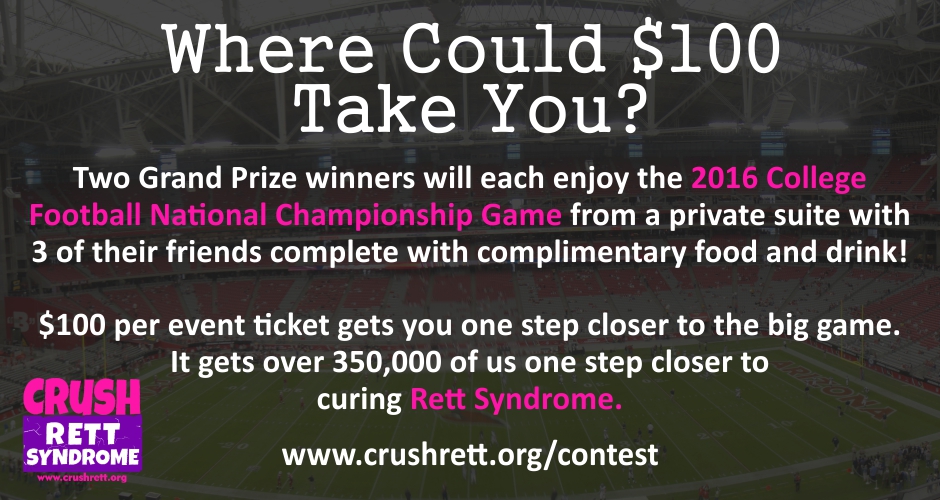 Join us in-person at Sidewinder Subs in Gilbert, Arizona or join us virtually from wherever you are to learn more about Rett Syndrome while we enjoy the Cotton Bowl  or the Orange Bowl, whichever one is played first.

Event Tickets are $100 each and include a FREE Door Prize Ticket. We have several great prizes including two Grand Prizes. Each Grand Prize includes 4 seats in our private suite at the CFB Playoff Championship Game in Glendale, Arizona on January 11, 2016 located near the 30 yard line. The private suite includes fabulous complimentary food and drink including beer and wine. Enjoy the game in style as our way to thank you for taking the time to learn about Rett Syndrome and supporting our mission.

Purchase your event ticket online by January 2, 2016, by mail by December 31, 2015, or in person at the Sidewinder Subs event. Door prizes will be awarded on January 3, 2016. The winner does not need to be present to win.

We also have sponsorships available that include guaranteed seats in our suite or in the lower level of the stadium. Secure your seats now to this premiere football event!

Imagine Autism, Cerebral Palsy, Parkinson’s and Epilepsy all in one little girl. Rett Syndrome is a neurological disorder that affects mostly girls. It affects over 350,000 people worldwide. A girl is born with Rett Syndrome every 90 minutes. But now there is hope. In 1999, the gene responsible for Rett Syndrome was discovered. In 2007, the symptoms were REVERSED in lab animals proving that the disorder does not cause permanent damage. Now, human clinical trials are underway to treat some of the symptoms. Researchers are closing in on a cure that could not only save lives, but would also give these girls a chance at a normal life.

Join Crush Rett Syndrome and be part of the team that cures the first reversible neurological disorder!