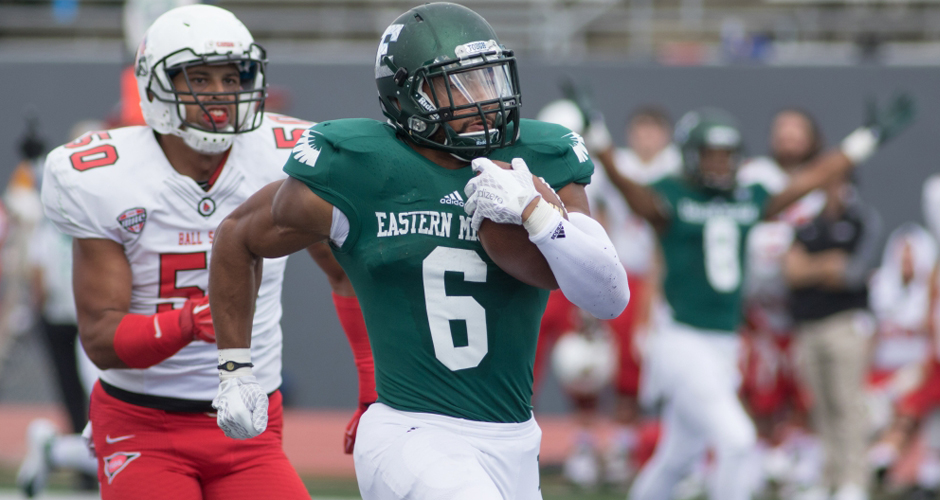 Running backs are hard to predict when analyzing how they will turn out in the NFL. That was not the case for Dallas when they looked at their new back’s pre-draft measurables. He’s 6’0’’, 225 lbs and runs a 4.38 40 and has a 41-inch vertical! Those stats are hard to beat at the position, so it’s no wonder the Cowboys drafted Ezekiel Elliot.

Wait scratch that; I meant Darius “Big D” Jackson, the exceptional athlete out of Eastern Michigan whom Dallas spent a sixth round pick on.

Yes, you read that stat line right. He is a physical specimen in the backfield, and was on the radar long before the draft. Now, the former Eagles product is a member of America’s Team.

Darius, in a lot of ways, was a late bloomer in his college career. He wasn’t a starter until his senior season and cranked out a school record 16 touchdowns while rushing for 1078 yards, earning him 3rd Team All-MAC in 2015.

The Cowboys view Jackson as someone who can be Elliot’s running mate for the years to come.

Darren McFadden stepped up his game last season, but he is injury prone and not a long-term option. Lance Dunbar is coming off of a major surgery and won’t be ready for camp. Additionally, Alfred Morris was signed in the offseason, but he saw his production drop last year, which ended in a lost starting spot on the Washington Redskins.

Not only is it safe to say Jackson is in the future plans of America’s Team, but it wouldn’t be a crazy thought to believe he can contribute next year and crack the rotation.

It would be a dream come true for Darius, as this is his hometown team. He grew up in the Dallas suburb, Garland, before moving his junior year of high school. Now, he’s home and ready to compete.

His combination of size, speed, and elusiveness is not what you find out of a typical running back. He did not attend the Draft Combine, but based on his pro day results, Jackson would have tested in the 99th percentile in the broad jump, 96th percentile in the vertical jump, and the 94th percentile in the 40-yard dash out of all of the combine participants. That exposure could very well have shot him up the draft boards.

Thankfully for Dallas, he didn’t attend, which made the young man’s abilities a bit of a mystery to the rest of the league.

The Cowboys are big fans of the SPARQ rating, which is a more analytical approach to measurements of a prospect. Darius practically breaks the scale with his athleticism.

Let’s not get it twisted: Jackson has been drafted to the Cowboys as the back up to Ezekiel Elliot. But their offensive plan involves a HEAVY dose of running behind arguably the best offensive line in football. That means when Elliot needs a breather, someone has to come in and keep the defense on its heels. In a perfect world, the team wants that someone to be Darius.