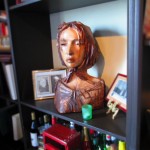 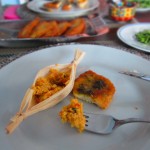 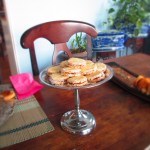 The League of Kitchens: This New York Cooking Program Turns to Immigrants for Authentic Instruction

Mirta Rinaldi opened up her door and invited me into her home with a warm embrace. Inside her Forest Hills apartment, I was immediately struck by a sense of being somewhere else. Not in Queens. Not in New York. Not in the United States of America.

That’s because Mirta’s home is filled with an impressive and obviously cherished assortment of artifacts and mementos of her homeland, Argentina. She showed me these items, one by one, and told me the story behind each. I learned what they were and how they were used, from the belts that gauchos (Argentinean cowboys) wore to the small collection of decorated knives to her precious books, including the “Bible of Argentina,” Martín Fierro, an epic poem by José Hernández. (“This is read more in Argentina than the Bible,” Mirta told me.) of these items on display, the most amazing to me was her collection of mate bowls covering the entire top of her piano. She proudly showed me her acquisitions with a sweep of her hand.

This is how Mirta begins all of her cooking classes for The League of Kitchens (LofK), a New York City-based cooking program that allows people to learn international cuisine from immigrants in the cooks’ homes. I trekked across Queens on my lunch break—twice—to speak to two such cooks to get the immigrant’s point of view about the LofK program.

The League of Kitchens was founded by Lisa Gross in 2013, to create “an immersive culinary adventure in NYC.” Immersive is the operative word. Each class has a maximum of six students who go to the cook’s home and learn, in intimate detail, the secrets to that person’s native cuisine. The instructors are not culinary school grads or professional culinary teachers. These are just people who happen to be great cooks.

That’s what makes LofK’s program different from a cooking school—it’s a level of culture and legitimacy that you don’t get in a formal setting. I have nothing against cooking schools; I went to one myself. But LofK classes give you something beyond basic skills or lessons in specific types of cooking. Each class gives you a story.

It is the story of immigrants.

Gross began the program because she recognized the need for people to learn authentic cooking skills from real home cooks. Her mother is a Korean immigrant who came to the U.S. in the 1970s, and her father is American of Hungarian Jewish descent. Gross had an interest in helping her Korean grandmother, who lived with them, but was usually “shooed” out of the kitchen and sent off to study because “studying was more important than cooking.”

“She didn’t highly value her own cooking skills,” Gross says, “and she wanted me to have opportunities that she didn’t have.”

It’s a story that has been told throughout the generations: the children of immigrants were discouraged from physical labor so that they could have a “better” life than their parents had. The flaw to this practice is that the culture of the immigrant family got muted, their traditions faded, and their arts were lost. Lessons of the kitchen suffered one of the worst blows, and there was—for several decades—a decline in the mastery of home cooking. But that trend has turned around.

“Later on, when I fell in love with cooking and wanted to make Korean food,” Gross continues, “I tried to teach myself from cookbooks and the Internet, but nothing came out as delicious as when my grandmother made it. I realized that cookbooks rarely capture the techniques and details that make food great—you have to learn those things from a person.”

And so began the seeding for LofK. Gross’s search for a Korean grandmother in NYC who would teach her to cook those traditional family recipes became a quest to find “amazing home cooks from all over the world to cook with and learn from.”

The cooks who end up teaching for LofK come to the program in different ways. Take Despina Economou, for example, a native of Greece who immigrated to the US in 1972. Originally from Chalkida, capital of Evia (second largest island next to Crete, she points out), Despina is a retired nurse whose daughter, Rona Economou, owns a bakery on the Lower East Side called Boubouki. A customer, who was friends with Gross, asked Economou if her mother would be interested in participating in the program. Despina spoke to Gross and went through the lengthy, rigorous process that Gross has set up. In the end, Despina was one of a select few chosen to teach a class. Mirta was one of approximately 150.

Mirta is originally from Mendoza, which boasts the highest mountain range in South America: Aconcagua. Culturally diverse by birth—her mother was Argentinean with criollo roots and her father was, as she puts it, “made in Italy, born in Argentina.” Before joining LofK, she was a personal assistant to an undisclosed “philanthropist and songwriter,” and then retired. After her daughter, Paola Garcia, scrutinized LofK’s program, she decided that this was a good place for her mom to share her talent. 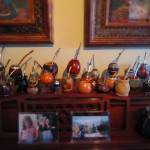 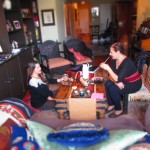 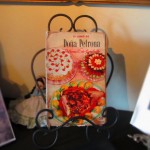 Once Gross and Megan McGowan, the program manager, are made aware of potential recruits, the candidates are invited to an info session, where first-round interviews are conducted. The best candidates are asked to do in-home cooking auditions. Gross then makes the final choices. “We’re looking for people who are exceptional home cooks with deep culinary knowledge,” she says, “who are also great hosts with strong teaching potential.”

I asked Despina why she thought she’d been one of the few chosen. “I think it’s the Mediterranean diet,” she replied. Because she was a nurse, she feels she has the knowledge about what’s healthy and how to prepare healthful meals. She expressed that what she has to offer is useful for people interested in cooking and eating “properly and healthy.”

There are two types of workshops—“Immersion” and “A Taste of.” For $149 per person, an Immersion Workshop, given from 1 to 6:30 p.m. includes an orientation, lunch and a beverage, a hands-on cooking lesson on four to six different dishes, dinner with dessert and a booklet of recipes. At $95 per person, a “Taste of” Workshop is from 2 to 4:30 p.m. and includes a welcome snack and beverage, an orientation, a hands-on cooking lesson on two to three dishes, and lunch. Both types of workshops take place on a Saturday or Sunday. There are diverse cuisines to choose from, such as Lebanese, Indian, Japanese, Bengali, Uzbek, Trinidadian, and Afghan. Special dietary needs can be accommodated.

To the sound of traditional Argentinean music, I sat with Mirta and her daughter to learn what her students learn, and we began with the mate ceremony. Mate (pronounced MAH-tay) is a traditional Argentinean beverage made from the highly caffeinated yerba mate leaves that are steeped in hot water and drunk from a mate bowl, historically made from carved gourds, but also from pewter, silver, ceramic and other materials. A group of people will sit around and share the brew with the help of a bombilla (straw) to filter out the leaves. She sweetened mine with a little sugar and I sipped around bites of toast with homemade guava paste.

Mirta equates the mate ceremony with a peace pipe ritual. “It unites people,” she says, “and creates friendship.” Indeed, when I asked her about how she felt about having strangers in her home, she and Paola were hesitant at first, but Paola said that matiando—the act of having mate—sets up a safe and friendly atmosphere.

Despina also was a little leery of having strangers in her home, as anyone would be in New York City, but she said, “By the time we finish, we’ve become almost friends.” And that is the difference—the personal element.

That’s the other thing that makes this program different: You are in the teachers’ homes, where they cook for themselves and their families every day. This comes with its own issues, the biggest one being space. After all, these are small New York City kitchens we’re talking about here. Mirta told me that she felt her kitchen was too small to have six or seven people crowded in there, and having been in Despina’s kitchen, I imagine an even tighter group. But it’s these intimate quarters, the personal touches that make a home, and the signs of a well-loved kitchen that make a class like this so appealing. Things like Despina’s Greek decanter, Mirta’s “Tango” plaque, or someone’s hand-hewn spice rack, and family photos give the venue warmth and welcoming, and gives students a sense of being taken on a journey to far-off, exotic places.

Despite the size of their kitchens, expressions of delight graced both women’s faces when I asked them what their favorite dish to teach was. With a big smile on her face, Despina said, “Shrimp with rice and spanakopita [spinach pie].” Mirta didn’t hesitate for a second and practically answered before I finished my question. “Chimichurri,” she said, referring to the ubiquitous tangy green sauce that’s used on everything from grilled meats to vegetables to toast.

In Mirta’s cozy kitchen, I received a lesson in the ways of Argentinean barbecue, as she grilled sausaages on a stovetop grill, and made humitas (like tamales) and pollo Milanesa (chicken cutlets). This delectable lunch topped off with homemade alfajores (South American sandwich cookies). I also received a lesson in shopping—where to find authentic foodstuffs in Queens. I could see the joy light up MIrta’s face during the entire encounter.

Than look was on Despina’s face as well when we talked about the classes. You see, the teachers get something out of it too. Despina enjoys sharing her knowledge. “I teach [the students] how to eat properly,” she says. There is a deep satisfaction and fulfillment that comes from sharing this knowledge. “This is very satisfying to me.” Mirta’s enthusiasm for teaching traditional Argentinean cooking was evident in the details she shared about each food she served me and every artifact described, as if she were offering a gift.

These lessons are, in fact, a gift. These women, from all over the globe, now call New York City their home and they open up their homes and vaults of knowledge and share the secrets of their homelands with anyone with a willingness to learn. And in this way, the world becomes a little less vast, a little more familiar, and perhaps a little less hostile. Food is how people around the world show love for their families and friends, and respect and hospitality to strangers. When people share food, there is peace. And when you ask someone, “How did you make this? What’s your secret?” differences in culture, religion and social status no longer matter. I’ve seen it again and again.

Mirta’s daughter, Paola, voiced what she and her mother feel is the ultimate reward of such a gift: “Breaking bread breaks barriers.” It makes me wonder why they don’t just replace tanks with blenders.

For more information of The League of Kitchens. And if you want to see Mirta Rinaldi make Argentinean barbecue, watch her segment on The Greene Space here.