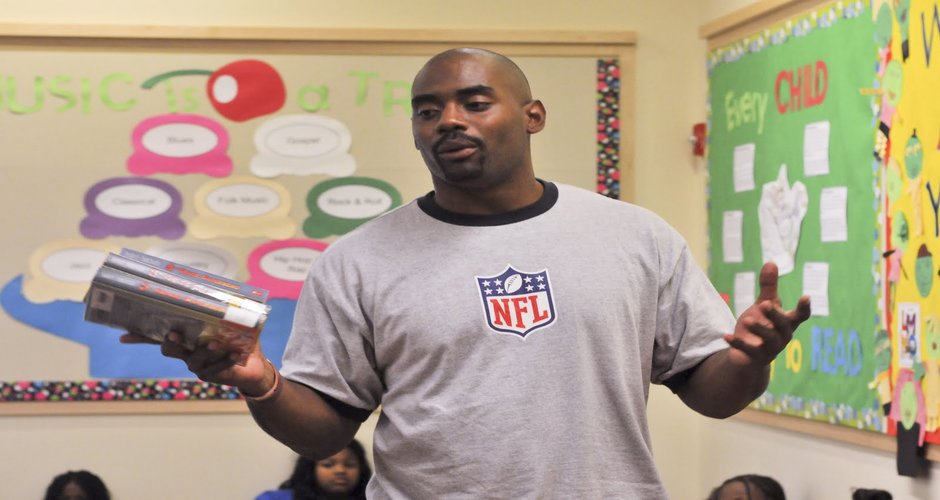 Anyone who ever picked up a pigskin knows the feeling; the desire to reach the “next level”. All of us have dreams of scoring a touchdown, performing a Lambeau Leap or participating in the climactic promenade through a game day tunnel. Some people even conceptualize an afternoon at Radio City Music Hall in which their name is being announced on Day 1 of the NFL draft. Let’s face it, we have all had these visions at one point or another. We say stuff like, “I could’ve been the best. . .” as well as “I should’ve run harder,” and “If I didn’t get hurt, I would’ve been amazing”. Yes, we have heard it all. Every single excuse has been heard. Every little setback has been vocalized. Every football story has been told. And while there is no turning back the clock or amending the circumstances which led a person to NOT to make the NFL, who said someone still can’t fulfill their childhood dream of being a DRAFT PICK? Ask former NFL prodigy Chris Draft what I mean because his family foundation is revolutionizing leadership across the entire country.

Established by 13 year NFL vet Chris Draft, The Chris Draft Family Foundation (CDFF) has effectively impacted thousands of communities since 2006. The foundation is centered on multiple initiatives that include an advocacy for the importance of education, healthy lifestyles, character development, physical-fitness, and self-discipline.

A primary aim of the foundation is the partnership between national and local community organizations. These partnerships are a perfect collaboration because a lot of daunting communal issues become resolved as a result of joint efforts. Families are equipped with didactic resources; thereby able to prosper and uplift themselves from the unfortunate situations as well as circumstances that often beleaguer them. Bottom line: citizens from towns, cities, and territories across the country feel their sense of purpose as they are empowered by the foundation. The foundation’s immense guidance percolates through communities in Chicago, Buffalo, Washington, San Francisco, Charlotte, Atlanta, St. Louis, Anaheim, and a number of other regions. So, who keeps the CDFF’s turnstile operable?

DRAFT’S PICKS™ are the one’s changing the world, one community at a time. They are indispensable ambassadors who hale from schools, clubs, and teams. They are presidents of various organizations, committee leaders, and active volunteers. As the foundation says,

“They (Draft Picks) are committed, they stand up, and they are trying to change the world.” Draft’s Picks™ can be summed up like this: “Draft’s Picks™ come from all walks of life and are supported by the foundation through special invite-only events throughout the year. The foundation welcomes Draft’s Picks™ as their hand-picked ambassadors, charged with sharing the message and lessons from carefully planned events back to their respective community thereby extending the messages beyond a single event or day. Draft’s Picks™ help the Chris Draft Family Foundation extend the mission that is the driving force behind all activity – empowering and uplifting communities by educating families to make healthier choices.”

The foundation identifies family dynamics play a pivotal role in children’s lives. Likewise, family is a charismatic force where values are drawn from. If a family is properly educated by ambassadors then a family’s ambitious undertakings may be maximized. And the most beneficial aspect to the Draft’s Picks™ are that these entrusted deputies disseminate the CDFF’s core advice while representing different age groups. Sometimes you have high school athletes affirming the CDFF’s mission statement whereas other times you may have a non-profit president counseling families about the CDFF’s lessons. Regardless, these leaders are conferring the CDFF’s wisdom on the public.

It gets better, Draft has other diverse sets of “teams” outside of the Draft’s Picks™. On one hand you have “Team Draft” which is responsible for working to save those with lung cancer; this was inspired by the passing of Draft’s wife Keasha to the horrible disease.

The “Asthma Team™” is a social support network for those tackling asthma. Another team is the “Character Team™” which recognizes a stream of ethical role models and principles in communities nationwide. “Literacy Leaders™” lead the charge for education, networking, and encourage reading.

At the end of it all, Chris Draft has devised a strategic method to reaching demographic audiences while relaying the CDFF’s mission, vision, and goal. People misconstrue, at times, that they are leading a robust lifestyle full of rich choices; this occurs according to what information people have been taught, understand, and readily incorporate into their lives. Draft is offering priceless information, a bulwark of resources, and unparalleled support on behalf of the ever growing organization partnerships. The “Teams” currently in place are the cement of the CDFF’s operations scheme.

There is a quote from John Quincy Adams (on the CDFF’s website) that sums up the entire foundation’s ventures to this point:

“If your actions inspire others to dream more, learn more, do more and become more, you are a leader.”

Since graduating from Stanford, Chris Draft’s actions have inspired others to dream more, do more, and become more. He is a guardian of the nation with the CDFF, fighting for those with lung cancer, and inspiring people of all ages. Draft could have lived in recluse after the passing of his wife, but just as he stuck by Keasha’s side till the end, he’s sticking by people’s sides; whether they have lung cancer or not. The #NeverGiveUp Jimmy V way is triumphant, and it would seem that Chris Draft will NEVER GIVE UP on people, even when most others would be hesitant to approach a “stranger”.