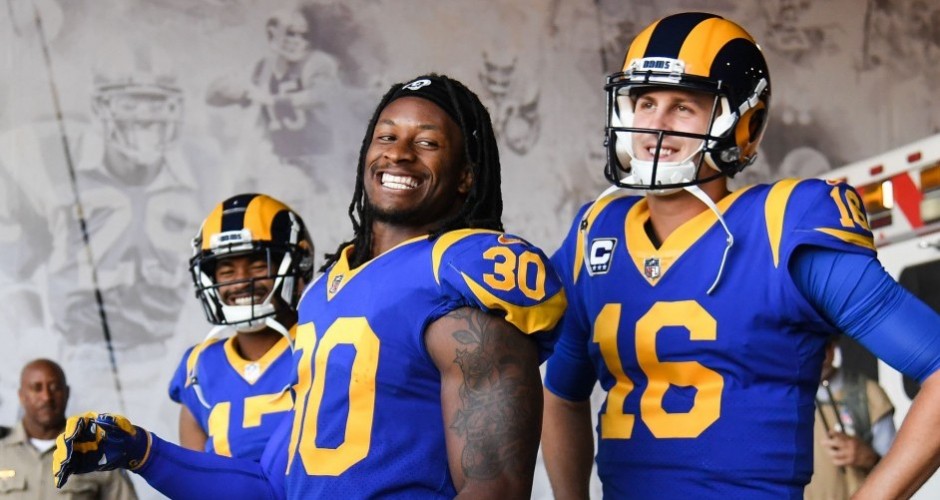 Buckle up. This Monday brings us one of the best matchups the NFL has had to offer in quite some time. The 9-1 Kansas City Chiefs will be facing off against the 9-1 Los Angeles Rams. Both teams are among many predictions to be in the Super Bowl. This game was originally scheduled to take place in Mexico City but due to poor field conditions the NFL brought the game back to L.A. In an effort to show support to their community, the Rams have given away thousands of tickets to first responders and victims of the horrible fires ravaging through southern California.

Monday Night’s game will feature two players who are in the thick of the MVP discussion in Patrick Mahomes and Todd Gurley II. Mahomes, the second year superstar quarterback for the Chiefs, is currently third in passing yards and has already scorched teams for an NFL-leading 31 passing touchdowns. The 23-year-old is on pace for 50 touchdowns passes, which would give him a share of second place for most touchdown passes in a single season. With six games to go, Mahomes has already broken the Chiefs single season touchdown pass record and is on pace to shatter the single season passing yards record by nearly 500 yards.

On the other sidelines we have 24-year-year old superstar running back, Todd Gurley II. The Rams have put together a great team, but Gurley is the heart and soul of an offense that currently averages 33.5 points a game. He leads the NFL in rushing yards (988) and total touchdowns scored (16) – even after respectfully declining to add another score to his stats late in a game against the Packers. TGII is on pace for 2,224 yards from scrimmage and will be up against a defense that has been giving up over 120 rush yards a game to opposing teams. Don’t be surprised if Gurley runs past that average by himself.

Marcus Peters vs. Tyreek Hill. This year, Rams cornerback Marcus Peters has been off. This week he will be facing the team that drafted him and traded him. He was a first round pick in 2015 by thie Chiefs and won Defensive Rookie of the Year. In his short career he’s already made the Pro Bowl twice and has even led the NFL in interceptions in a season. Chalk it up to having to get comfortable on a brand new team, a move to the NFC, or just the pressure of having to live up to the hype, but Peters is being picked on. He’s ranked near the bottom in passer rating when being targeted which has resulted in him being targeted more than any other corner in the NFL in the past few weeks. With weapons like Tyreek Hill at his disposal, Mahomes will likely continue that trend. Hill is tied for second in the NFL with nine receiving touchdowns and can turn any reception to points with his playmaking ability.

Robert Woods and Brandin Cooks vs. Chiefs secondary – Rams receivers Cooks and Woods are currently ranked 10th and 11th in receiving yards respectively. Losing receiver Cooper Kupp for the season is definitely costly for the Rams but they are still in a lot better of a situation at wide out than most teams. The Chiefs come in to Monday night giving up 289 passing yards a game, second worst in the league. It will be interesting to see if Rams Head Coach Sean McVay tries to slow it down with a heavy dosage of Gurley, or if he attacks Kansas City where they are weakest.

Aaron Donald vs Patrick Mahomes – Mahomes is making some of the best passes and decisions a quarterback can make, but he has never had to deal with someone like Aaron Donald. Donald leads the NFL with 12.5 sacks and at times looks like a men among boys. Granted, the true matchup is actually Donald verses the Chiefs offensive line but with all due respect, we know who wins that battle. The battle for Mahomes may be a mental one. If number 99 makes a few big plays, will the young quarterback be able to remain focused or will he freeze up in the headlights?