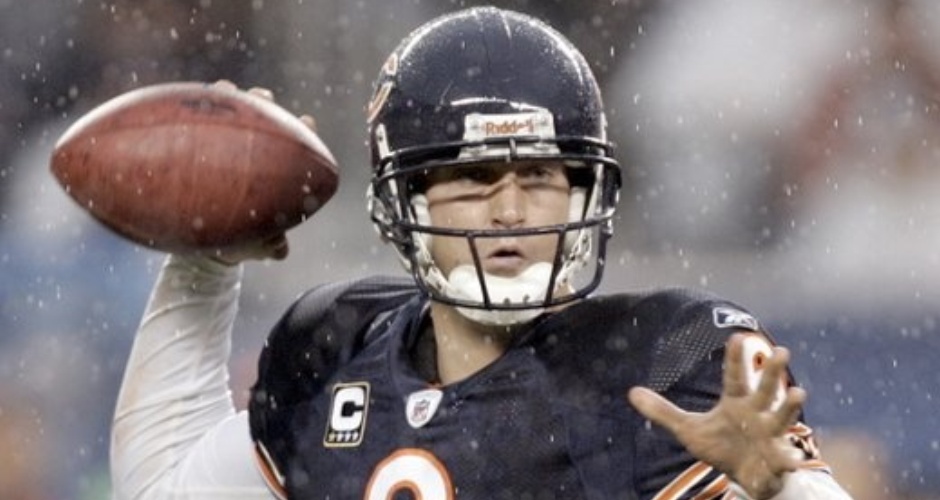 The Chicago Bears accomplished this season what they did last year : fall short of a division title and have their quarterback the focus of media slander for most of the year.  The Bears finished 10-6,  last season and that wasn’t enough to make the playoffs.  Coach Lovie Smith was fired after the ten win campaign and was replaced by Marc Trestman.

Trestman who has had success in the NFL at the coordinator position, left his job as a head coach in the Canadian Football League, to take the same position with Chicago.  The head scratching began immediately amongst Bears faithful – especially younger fans who weren’t familiar with his work as a coordinator in the NFL years ago.  I was skeptical because although he has been given the moniker of “The Quarterback Guru” or “The Quarterback Whisperer” – my belief was that the game has changed a lot since he was last in the league – and the gap of competitive football from Canada to the States is a big one – I didn’t see this working out.  The truth was, the game has changed – and we all know the game has changed to benefit the quarterback – Trestman proved his monikers to hold truth.

General Manager Phil Emery, brought Trestman in to work with the enigma the Bears have at quarterback, Jay Cutler.  Cutler bought into Trestman’s system and it showed early that Cutler was taking better care of the football and being more aware (never straying away from) his gunslinger abilities.   Cutler finished the season with career best in both passer and third down ratings under Trestman.

Many preseason pundits predicted Matt Forte to have a big statistical season and he rewarded fantasy owners everywhere by having 12 total touchdowns, over 1300 rushing yards and falling six yards short of 600 receiving yards.  Even with that, my knock on Forte has and always will be, he just seems to go down to easy – but I digress. . .  GM Phil Emery did an amazing job fixing up the offensive line, which was among the worse in previous seasons.

Emery took a lot of heat for drafting guard Kyle Long with the teams first round pick – but all that heat quickly cooled off as Kyle showed an “old-school-nasty” at the guard position which made him a fan favorite and helped inspire the play of the entire offensive line.  Kyle made the Pro-Bowl in his rookie year and was part of an offensive line which also made the huge off-season signing of Jermon Bushrod at left tackle.  Veteran Matt Slauson and another rookie Jordan Mills were part of this re-vamped O-Line that was easily one of the most improved in the NFL.

Another addition that worked out well was the athletic tight end Marcellus Bennet.  Bennet caught for 759 yards and was part of thethree headed receiving monster the Bears displayed week after week.  Brandon Marshall proved to still be one of the toughest wideouts to cover, even in double coverage – and teams learned quickly that double covering Marshall would only compound issues for rival secondaries due to the break out year of one, Alshon Jeffery.

In his rookie season, Alshon looked like a guy with all the physical gifts, but lacked some focus and there were questions about his route running.  After an off-season which included working out side by side with Brandon Marshall, Alshon emerged as one of the more dangerous receivers in the league. He led the Bears with over 1400 yards receiving and was on most highlight reels by the weeks end.  A talent of Alshon’s that separates him from most is his ability to locate a pass in flight.

Trestman’s offense was able to survive a quarterback controversy when Jay Cutler missed five games due to injury and veteran back up Josh McCown filled in.  Josh McCown didn’t just “fill in” though – that boy balled.  In his time at starting quarterback McCown had a QB Rating of 109, threw for over 1800 yards and 13 touchdowns.

Being that Jay Cutler has never been the media’s favorite (or quite frankly even “liked” by NFL fans in general) it was an easy stir up of a quarterback controversy.  Throughout McCown’s time at starter – he and coach Trestman kept reassuring the fact that it was Cutler who was the starting quarterback – so it should have come as no surprise that once Cutler was ready to play – it was his job once again.  Trestman proved that he could still coach an offense like very few finishing second in the NFL with points per game scored, second in total points and fifth in passing yards.  Seeing an offense like this in Chicago is something very foreign to a Bears fan.  But unfortunately the poor of the defense is something nobody saw coming – and even Marc Trestman’s high powered offense couldn’t make up for the play of his defense.

Keep in mind in the off-season the Bears opted to not re-sign their legendary linebacker Brian Urlacher. Urlacher left pretty disgruntled about the whole situation, but the fact that no other team signed him showed the Bears made the right move.  Physically and athletically Urlacher had become a shell of what made him great at the middle linebacker position – but it wasn’t his physical attributes which were missed on the field – his leadership and instinct is were sorely missed.  The Bears still had veterans Charles Tillman and Lance Briggs to help lead – and they also had franchised their pro bowl defensive tackle Henry Melton — unfortunately Melton and Tillman faced season ending injuries, while Briggs missed time due to injury and was never right when he played.

The Bears defense finished a tenth of a point shy of tying for most points given up per game and gave up over 2500 yards on the ground at a 5.3 yard clip per attempt.  The secondary was a total mess and the play of starting safeties Chris Conte and Major Wright were almost comical.   The Bears gave up 18 plays of 20 or more yards and 5 plays of 40 or more yards.  So pretty much it went down like this : If you had a game plan against this Bears defense, whichever way you decided to come at them – it was going to work.

Thanks to an Aaron Rodgers injury (inflicted by the Bears’ own Shea McClennin) , a bad Vikings team and a Lions team that is allergic to winning when it counts – the Bears’ division title hopes were alive all season long.  Every scenario worked out mathematically for the Bears in week 16, all they needed to do was beat the Philadelphia Eagles on national television and instead they were publicly spanked by Nick Foles’ flock 54-11.  That ultimately led to a week 17 match up against long time rival Green Bay – and it was set up beautifully.  Aaron Rodgers came back for the division deciding game and ended up beating the Bears on a touch down pass to Randall Cobb.  Cobb got behind Conte to score – which was something of a weekly occurrence anyhow.

The Bears finished the season 8-8 and although there is optimism looking forward with the offense – the question moving forward is: What will general manager Phil Emery do to re-establish a defense deserving of the title “The Monsters of the Midway?”