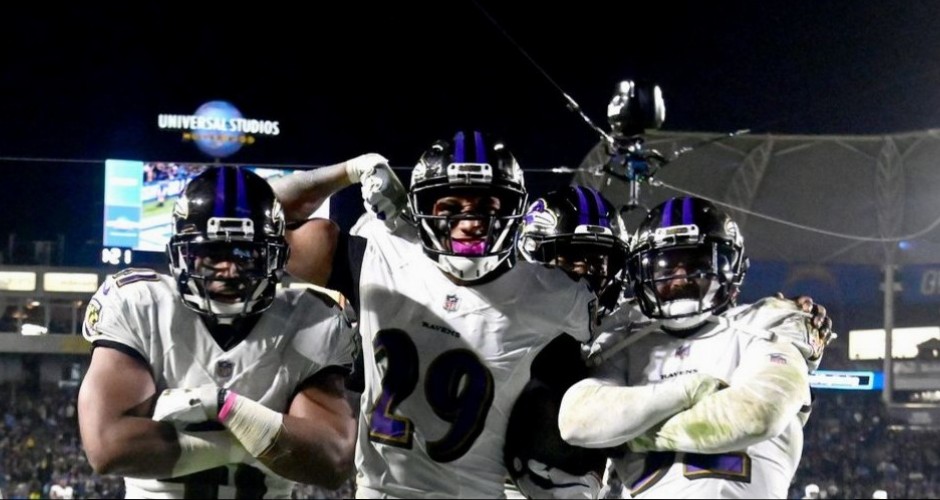 On Sunday Afternoon, the Los Angeles Chargers get the chance to avenge a critical loss to the Baltimore Ravens as both teams matchup in the NFL’s Wild Card Round. In that game, the Chargers were in a pursuit of the Kansas City Chiefs in the AFC West Division race. But in that matchup 3 weeks ago, the Ravens’ number 1 ranked defense and their rookie Quarterback went into Los Angeles and defeated them 22-10.
In that game, Baltimore kept the NFL’s 6th highest scoring offence (26.8 points per game) to 10 points and they only had 198 total yards. They held one of the NFL’s best running backs, Melvin Gordon III, to 41 yards rushing and forced Pro Bowl Quarterback Phillip Rivers into his worst game of the season. Rivers finished with 181 passing yards and 2 interceptions. The game turned when Antonio Gates fumble as the Chargers were driving to take the lead ended their hopes. Gates, fumbled and Ravens’ cornerback Tavon Young recoved the fumble and raced 62 yards to put the game away with 2:40 left in the game. Ravens quarterback Lamar Jackson threw for 204 yards and a touchdown in the victory.
As both teams now start with a fresh slate, lets take a look at how both teams got here and what both teams need to do to win on Sunday.

The Chargers won 12 games in 2018 and in most years winning that number of games would give you at least a division title and a 1st round bye. But in a division that has the Kansas City Chiefs and the incredible year of Patrick Mahomes, the Chargers finished 2nd and now have to travel on the road to start their run to the Superbowl. But getting to this point wasn’t the easiest. They lost starting tight end, Hunter Henry before the season started with a Torn ACL and had to bring back longtime fan favorite Gates to fill the void. Even though Gates isn’t the same Gates that we have all known throughout his career. The Chargers lost Gordon for 4 games due to injury and star defensive end Joey Bosa missed the opening 10 games. Los Angeles only had 8 players start every game this season. Now with all of those injuries and missing players, Los Angeles was one of two teams that finished the season in the Top 8 in overall on offense and defense.

Los Angeles have a great balance on offensive and we all know about the weapons that surround Rivers. When you have Gordon, Allen, Austin Ekeler and Travis Benjamin, scoring points shouldn’t be a problem. Now it’s going to be on the defense to win this game. The Chargers have Ingram and Bosa rushing from the ends and James in centerfield at safety. Putting pressure on Jackson is going to be key and most importantly making sure that Jackson is making plays with his arm instead of his legs. Lamar only completed 58.1% of his passes during the season. That’s not something that should scare the Chargers. If they can force Jackson into becoming a passer instead of being a dual threat, the Chargers will have a great chance to advance in the playoffs.

Once again like in the team’s history, the Defense carried this team in 2018. If you want to see the Ravens in one moment, just watch last week’s final series against the Cleveland Browns. Baker Mayfield got the ball and was driving his team to a victory and eliminating the Ravens from the playoffs. But defensive coordinator Don Martindale dialed up 4 consecutive blitzes and now Baltimore is hosting a playoff game on Sunday. After starting quarterback Joe Flacco went down with an injury, the extremely talented Jackson took over behind center. At the time, Baltimore was 4-5 and was headed towards missing the playoffs. But Jackson led a turnaround and his combination of his ability to pass and the run the ball allowed Baltimore to go 6-1 to lead the team to the division title. Jackson has rushed for more than 70 yards in 5 wins when he has been a starter.

When Jackson took over as the starting quarterback, the Baltimore offensive changed. The days of the Ravens throwing down the field and winning with the passing game are now over. Jackson has had one game where he threw for over 200 yards in a game. Ironically, it was against the same defense. His ability to make plays with his feet put any defense on it’s heels. Now Jackson had a season low 39 rushing yards in their victory, but everyone knows that he can break a big play at anytime. With the run-pass option at John Harbaugh‘s disposal, if Jackson gets passed the Chargers rush, then he can reek havoc on the secondary with his feet. If Lamar gets into space, he’s dangerous and all he needs is a small space and a big play can happen.

Baltimore has 10 wins and in all 10 victories, the opposing team did not 100 yards rushing as a team