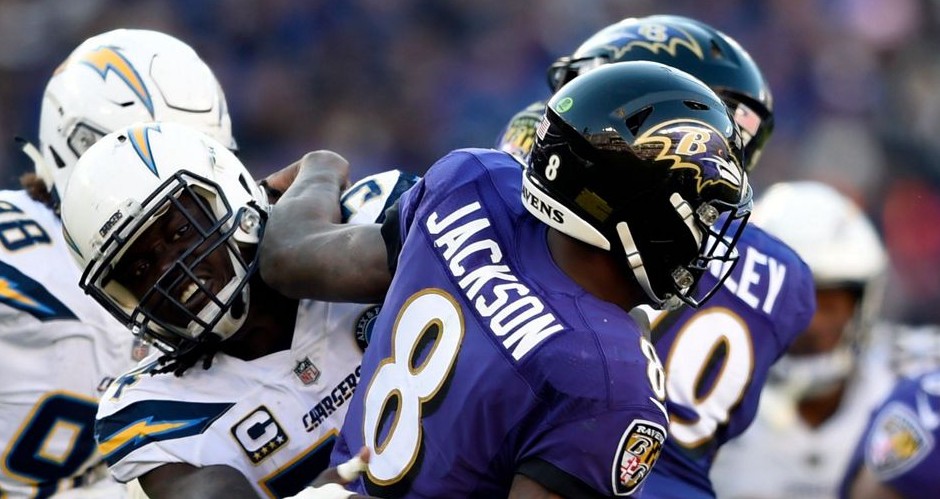 It seems like a short time ago, a fumble changed the fortunes of a Los Angeles and Baltimore matchup. Antonio Gates’s fumble as the Chargers were driving to take the lead, allowed the Ravens to win a critical game on their playoff push. That victory helped the Kansas City Chiefs win the AFC West and take the top overall seed in the AFC playoffs. That loss propelled the Chargers to a rematch against those same Ravens on Sunday afternoon in the AFC Wildcard round. But unlike the previous meeting, Chargers linebacker Uchenna Nwosa forced a fumble of Ravens quarterback Lamar Jackson to allow his team to hold on and advance by the score 23-17.

The Chargers defense dominated the Ravens offensive for 3 quarters and they led 23-3 at the end of the third quarter. But the Chargers defense allowed the former Heisman trophy winner, Lamar Jackson, to find his rhythm. After being pressured and sacked all game long, Jackson started to finally settle down. With the fans getting restless and wanting to see former Superbowl winning quarterback Joe Flacco enter the game, Lamar started to pick apart the Chargers defense. Down by 20, Jackson scrambled for a 1st down on a critical third and one in Ravens territory and converted on four down to put themselves in position to score. On that series, Jackson found Michael Crabtree for a 31 yard touchdown to make it a 13 point game.

Los Angeles would punt on their next position and Jackson would lead the Ravens to another touchdown as he found Crabtree on a seven yard comeback route to make it a six point game with 1:59 left. At the time, the Ravens had two timeouts and with the league’s number one defense on their side, they forced another Chargers three and out to give themselves the ball one final time.

Baltimore got the ball with 45 seconds left and Jackson found tight end Mark Andrews for a 13 yard catch and first down. Jackson spiked the ball and it set up the end of the Ravens season.  Like he had been dealing with all day, the Chargers pressured Jackson allowing Nwosa to knock the ball out of Jackson’s hand and Melvin Ingram recovered the fumble. From there the Chargers ran out the clock and will travel to Foxboro to take on the New England Patriots next Sunday.

Even though Jackson finished with 194 passing yards and two touchdowns, he had three fumbles and an interception. The Chargers eighth ranked defense make Jackson and the Ravens passing game miserable all game long. They sacked Jackson seven times and he was hit nine times in the game. Ingram proved why he is one of the best in the entire game. He finished with seven tackles, two sacks and two of the knockdowns on the Ravens signal caller.

The Chargers high powered offense was held in check most of the day by the Ravens defense. Pro Bowl quarterback Phillip Rivers finished 22 for 32 for 154 yards with no touchdown passes. Melvin Gordon had 17 carries for 40 yards and a touchdown. But he avoid what could have been a game changing fumble. On a key third down deep in Ravens territory in the third quarter, Gordon appeared to have fumbled on the 1 yard line and the Ravens had recovered in the end zone and scored a touchdown on the recovery. But after a booth review, Gordon was down on the one yard line and he scored on fourth down to put the Chargers up 20-3.

Baltimore finishes the season at 10-7 and enter the offseason with questions all across the board. Longtime General Manager Ozzie Newsome is retiring, John Harbaugh is being chased by a few teams and Flacco’s future as the starting quarterback in Baltimore.