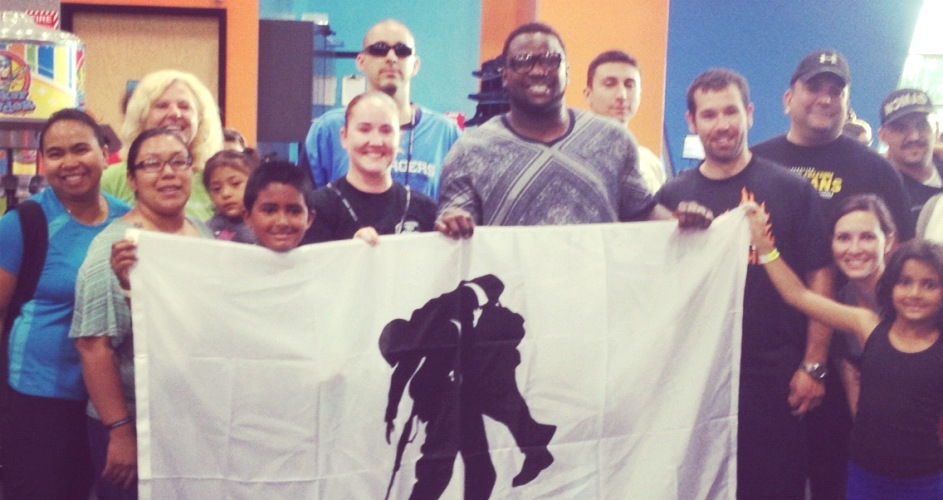 On Wednesday May 22nd, Le’Ron McClain and the Wounded Warriors Project teamed up at Skyzone in Chula Vista, CA for a good cause. The mission of Wounded Warrior Project is to provide services, to honor, and to empower Wounded Warriors. WWP’s purpose is to raise awareness and enlist the public’s aids for the needs of injured service members, to help injured servicemen and women aid and assist each other, and to provide unique, direct programs and services to meet their needs. WWP is a national, nonpartisan organization headquartered in Jacksonville, Florida. When McClain was told about this he didn’t hesitate to help out.

McClain plays fullback for the San Diego Chargers and is a bull on the gridiron. He was born in Fort Wayne, Indiana and received an athletic scholarship to Alabama University. He was drafted in the fourth round by the Baltimore Ravens and was considered the best fullback in the draft. In 2008 he has a breakout year scoring 10 touchdowns and rushing for 900 yards. He then spent one year in Kansas City and signed a 3 year deal with San Diego after that. Who have been searching for a fullback since Lorenzo Neal was let go a couple of years ago.  To get involved and learn more, visit woundedwarriorproject.org.

Theresa Villano of Pro Player Insider’s visited with McClain in between signing autographs at the San Diego Skyzone.

Pro Player Insiders: Le’Ron, why are you here to support the Wounded Warrior Project? Why are you interested in supporting this cause?

Le’Ron McClain: Today we are out here at Skyzone with the Wounded Warriors’ Project and their families. We are just having fun with their families. My PR agent ( Lauren Renschler of Centurion Strategies) came to me with this and I couldn’t turn it down. I am here with some great people.

PPI: Have any of your family members been in the military or service members?

LM: My grandfather served. He passed a couple of years ago and he use to tell me stories about his time serving (in the military). I thought about it in middle school and high school, but I stuck to sports. The job those men and women do for this country is unbelievable.

PPI: How are you helping raise awareness for the injured servicemen here?

LM: Main thing find out about the events. I’m trying to get more involved because I know the warriors are coming home and have injuries that need to be taken care of. I’m feeling great and really excited about getting involved with this organization.

PPI: People often compare football to going to war. What are some similarities and differences?

LM: I think (the similarities include the) work ethic, being part of a team, and having your brothers back on the battle field. On Sundays we approach the field and go in as a team. The difference is… football is men hitting each other and in the military it’s men and women coming together and fighting for our country.

PPI: It’s your second year with chargers. As a veteran full back what can we look forward to from you this season?

LM: I just take s lead by example approach in practice every day. I’m a pro doing everything.  I came to make the team better. One goal is be a leader on the offense to help the young guys and get us back to the playoffs. Then win the AFC West and get this thing turned around not just for this team but for this city also.

PPI:How would you describe working with Philip Rivers?

LM: Great, since the first day I stepped in the weight room the guy has welcomed me. He works hard and I enjoy working with him. He is also from Alabama too and we have the same southern dialect. We got some great guys around him. Hopefully he can prove all those critics wrong. The ones that are on his back for the last two seasons. From the way he is practicing right now… he will definitely do that.

PPI: We had opportunity to meet Keenan Allen and Manti Te’o. Are there any rookies you think will come in and contribute to the Bolt family? Any advice you would give them?

LM: I would say, just come in and work. Seeing Manti, Kennan, and DJ Fluker out there with us and just how much they will contribute to all our success. They (the rookies) are all hard workers and if they bust their tails and listen to their coaches they will help us succeed.

On the NBA Playoffs…

PPI: Heard you are an NBA fan. Who do you want to win the championship?

LM: I’m a Laker fan. Lakeshow is my team at home but everyone knows Miami Heat is a good team.  LeBron James is an awesome player. I saw him a couple of years ago and he is just amazing. I think the Pacers will give the Heat trouble.

Stay tuned for Part II of this interview with @Leron_Mcclain33 where we talk more about food, fashion, and football.