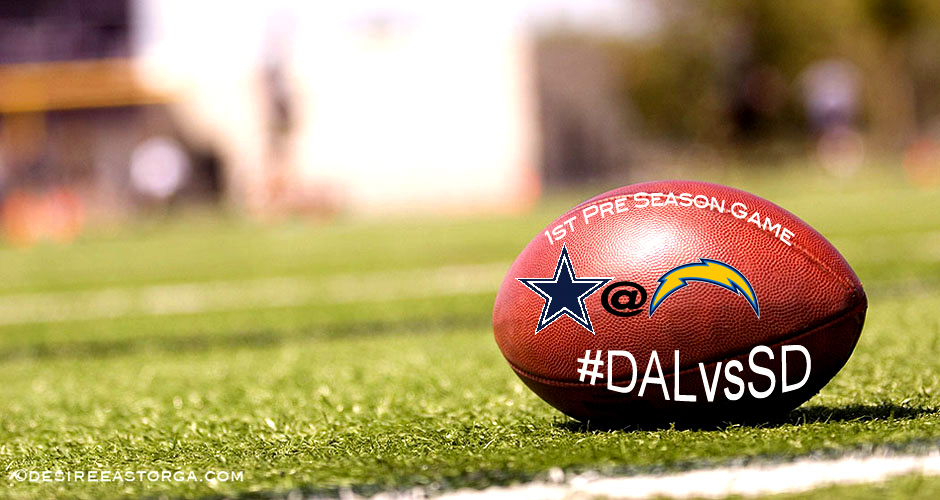 No Black-Out in SD!! More competition, faster younger, family atmosphere and some great additions to the 89-man roster, a lot of depth in the charts a more upbeat tempo and balance on the offense, new additions to solidify the defense and to watch dreams materialize on special teams. San Diego hosting Dallas for their first preseason match up.

Hear what the #Chargers have to say about tonight’s first preseason game. #DALvsSD http://t.co/JhVl96pmcU pic.twitter.com/vHOlw22AfT

Yep it kicked off Sunday with Bills hosting Giants for the HOF game in Canton Ohio, but for the rest of the league preseason commences tonight with 6 games continues to Friday with 6 as well and then 4 on Saturday to wind up the first week of preseason. Chargers hosting the Cowboys to a sold out Q. #TGITNF! Unfortunately Tony Romo will not play, after his second back surgery, Cowboys backup QB Brandon Weeden will get the start.

Former Charger greats, Hall of Famer Dan Fouts with the play-by play and Pro Bowler Billy Ray Smith with the color will be holding down the booth for ABC, both with a lot of early enthusiasm for the 2014 Chargers.

Dan Fouts praised “Tellesco has done a great job. Mike McCoy in his second year has got the team very focused, enthused and all those things bolt well for the Chargers this season.”

Fouts on challenges in regards to the schedule, “They have to play the NFC West, which is the best division in football with Seattle, San Francsico, Arizona and St Louis, you talk about the family atmosphere here, that will be tested here. I just hope the family is not like a Kardasian”

Although its going to be a long road for SD, a brutal one, especially the last 7 games after the bye:  @ Raiders, Rams, @ Ravens, Patriots, Broncos, @ Niners, Chiefs. One thing that is clearly a must is for this team to stay healthy, but I am getting ahead of myself, we haven’t even kicked off a preseason game yet, so lets get back to the here and now. Kickoff is in few hours as I write, every year I amp out, this year is no different, and yes its not the real season, yet, but its an indicator that my long awaited off season has passed!

Rivers will most likely only play one possessions. What I’m looking forward to seeing is this new offense with Frank Reich at the helm. How fast? Chip Kelly fast?? How balanced? How much run will I see? Play calling…yep the usual, with some new ones in the mix, really looking forward to upbeat and balanced.

Malcolm Floyd back on the field, after that scary neck injury last September.

Donald Brown in the backfield.

Former Steelers TE David Johnson’s contribution, he can block and has descent hands along with a ring.

Also interested in watching both back up QB’s whom I believe we will see much of in the next few weeks, Kellen Clemens former Oregon Duck with 8 years in the NFL and Former Southern Utah’s Brad Sorenson, whom I was impressed with last pre season.

Brandon Flowers and Jason Verrett not to play, however I look forward to seeing second round pick Jerry Attauchu and the secondary especially the edges. Dwight Freeney healthy with veteran leadership back on the field, along with Melvin Ingram, almost having them healthy and back is like getting two more players.

This is where the 2nd, 3rd and 4th quarter becomes interesting for me. This is your way to make the team!   The guys that shine bright during these exhibition games have the best chance to make it on the squad, special teams is usually the avenue for these fortunate ones. Kick return, punt return, at present with KR, Donald Brown and Eddie Royal as PR, best check out Javontee Herndon WR from Arkansas and 7th round pick Tevin Reese, WR from Baylor making a splash at practice.

Well Kick off is coming soon! Although there is no meriting on the game, a lot will show hopefully some sort of preview if you read between the lines.

First Roster cuts August 26th prior to 4;00 PM EST clubs must reduce roster to a maximum of 75 players on the active list.

Cheers till next week.

You can follow me on insta or twitter
@desiree_astorga
Time out with Desiree, the silver linings
An optimistic realist with intermittent football tourettes all the while searching for the 3rd dimension.
The DesireeSHOW
Photographer, producer, host, reporter, radio & TV, One-man-army, artist, skateboarder