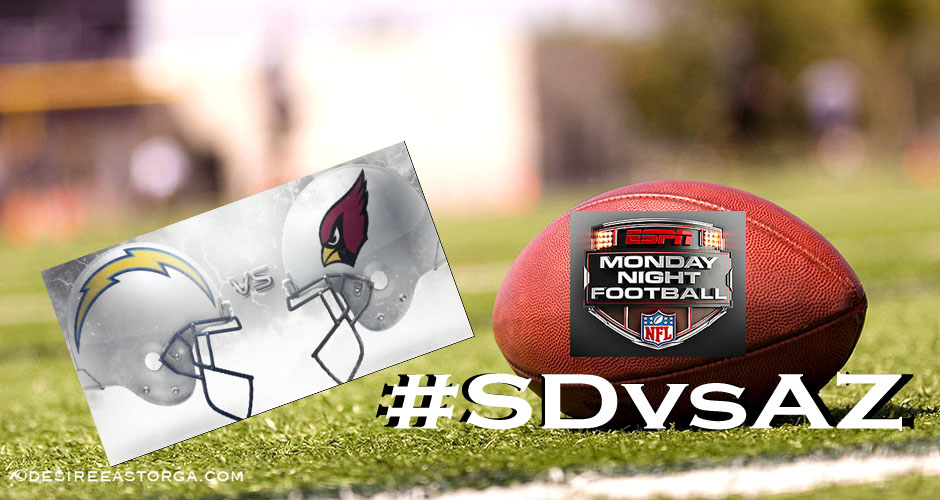 Final cuts, flip-flops and a Monday Night Football opener, just a few things going on in San Diego this week.  Same team different state, Bolts fly to Phoenix for the NFL 2014 Monday Night Football opener. Yes, they just hosted the Cardinals August 28th, edging over them in the final fourth pre season game 12-9, Chargers, but it was the battle of the two’s, three’s and four’s to make the squad, so let’s start with who made the cut to the 53 man roster, for a keener look here’s the depth chart.  Congrats to undrafted free agent from University of Buffallo, Brandon Oliver, yes number 43, taking a spot after impressing all.

Coach McCoy was adamant in interviews indicating that there is no connection,”We didn’t make the choice because we’re playing AZ, you can highlight it, bold it or underline it!”

Third, shortly after being released former Chargers and Stanford, Thomas Keiser joins a new Cardinal in Phoenix.  Fourth, Chargers 2011 3rd round draft pick Vincent Brown was released, however it is side noted, per www.Chargers.com,  It is important to note that Vincent Brown was waived-injured, and should he clear waivers will be placed on the reserve-injured list.

#FBF #FLASHBACKFRIDAY I can’t not but think of Michaels and Madden, which sadly is no longer the MNF I grew to love!

Granted I think Cris Collingsworth has done an amazing job, but that moved to Sundays. Still Monday Night Football sets the stage for the entire world, the only game going on, hence all the attention as ESPN’s crew Mike Tirico, Jon Gruden and Lisa Salters hold it down with an entire studio slew of former player, commentators Chris Berman, Stuart Scott, Mike Ditka, Keyshawn Johnson, Cris Carter, Tom Jackson, Steve Young, Trent Dilfer and Ray Lewis. If your a Chargers player or fan, this ideally will be the first stadium of the season and the last one, as University of Phoenix is the home for Super Bowl 49.  Chargers hold the all-time record over the Cards 9-3, however Arizona comes in as the 3 point favorite for Monday.
Familiarity from week to week with also former Chargers and Jet, Antonio Cromartie and one of the best run stops in the NFL last season.  Chargers secondary will need to watch out for Cardinals 2nd pick in the 3rd round, WR John Brown, Pittsburg State, at the 2014 NFL Combine, he ran the 40-yard dash in 4.34 seconds, which ranked as the third-fastest time of any player at the event.

“With this long and then playing Monday night, that’s always the challenge as coaches (to) just keep it simple and stay to the basics,” Frank Reich said.  “We’ve been waiting for this game for a long time.  So I think we’re pretty honed in.  I think we’ve been narrowly focused and have had a good idea all along how we wanted to attack.  We’ve really tried to get the plan in place early so we could focus on fundamentals, technique and just playing good football.   Play good sound football, run your basic stuff and win your one-on-one matchups. At the end of the day that’s what it comes down to.”

Few key odds and ends, first this is a must win for the San Diego Chargers, they have a history of starting slow with games and struggling early in the season, however they finish strong with a force when they become the underdogs.  Phillip Rivers last year stats in the redzone, 22 TD’s 1 INT, the run 8 redzone TD’s, 5 of those Ryan Matthews with a 2.5 yrd per carry average. New face to San Diego, Donald Brown with an average of 4 yards per carry in the redzone.  This could mean nothing or could be a deciphering factor on who the number one back will be, as Matthews has a history of losing the ball, just as he did in the opening pre season game on the goal line, while Brown has not fumbled since 2009.  This, once again, is a must WIN for the Bolts kickoff at 7:20 PM PST, as they need a quick start out of the gate and will turn around and host the SB48 Champs, The Seattle Seahawks 6 nights later for their home opener, a #SNF  WHITE OUT!

Injury Report as of Friday

Huge congratulations to the 37th member of the Charger HOF DE,  Leslie O’Neal!!

It’s safe to say that San Diego is ready for some FOOTBALL and possibly Tostitos, too!

Dynamite week wishes on a packed Sunday of football as you wait for the first MNF of the season, a double header commencing at 4:10 PM PST with NYGvsBUF ! Enjoy ALL the FOOTBALL this weekend!

You can follow me on insta or twitter
@desiree_astorga
FIRST DOWNS AND FLIP TRICKS
Time out with Desiree, the silver linings
An optimistic realist with intermittent football tourettes all the while searching for the 3rd dimension.
The DesireeSHOW
Photographer, producer, host, reporter, radio & TV, One-man-army, artist, skateboarder