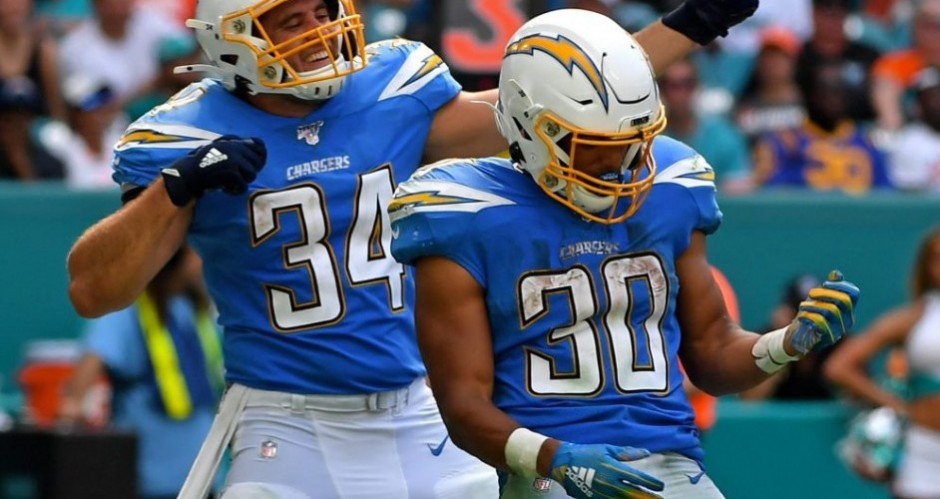 A trip to Miami was exactly what the doctor ordered for a suddenly reeling Chargers football team. Losers of two consecutive games, the Chargers got back into the win column on Sunday with an impressive victory, dominating on both sides of the ball. Even better news for the Chargers, they get their Pro Bowl, superstar running back, Melvin Gordon, back next week against Denver.
The Chargers got back to a familiar blueprint on Sunday. Austin Ekeler, once more – and perhaps for the last time (for the foreseeable future anyways) – started at running back for the Chargers and totaled over 160 yards from scrimmage, including one touchdown on the ground and one through the air. Philip Rivers aired it out once again for over 300 yards passing, an efficient 24/30 on the day while connecting with nine different receivers. Wide receiver, Keenan Allen, again proved to be Rivers’ favorite target (5 receptions) while Dontrelle Inman (5 receptions) filled in valiantly for the sidelined Mike Williams.
All eyes were on Melvin Gordon on Sunday, who returned to the sideline (but did not play) after a holdout kept him out of the first three games of the season. You might argue that, after Gordon, all eyes were on Ekeler, known for his dynamic play-making ability and the potential to take it to the house each time he touches the ball. So, naturally, it was Chargers 4th string running back, Troymaine Pope, who got the first rushing touchdown on the day and the Bolts never really looked back.
The Chargers stout defense came to play Sunday. Dolphins quarterback, Josh Rosen, was sacked five times and picked off once. Rosen was limited to just 180 total yards through the air, and the Dolphins run game barely cracked seventy yards on the day. Perhaps most impressive for this Chargers defense was pitching a shutout in the second half of Sunday’s game. If there has been an achilles heel to the Chargers defense so far this season, it has been their inability to stop teams late. In the previous two matchups, Lions quarterback, Matthew Stafford, and Texans quarterback, Deshaun Watson, both led their respective teams to late fourth quarter touchdowns that proved to be the difference in the game.
The Chargers return home next weekend against their division rival, the Denver Broncos. The Broncos were gashed earlier today by Jaguars running back, Leonard Fournette, to the tune of 225 yards on the ground. Needless to say, Chargers fans are chomping at the bit to see just how much damage the Gordon/Ekeler tandem can do against that same Broncos defense.