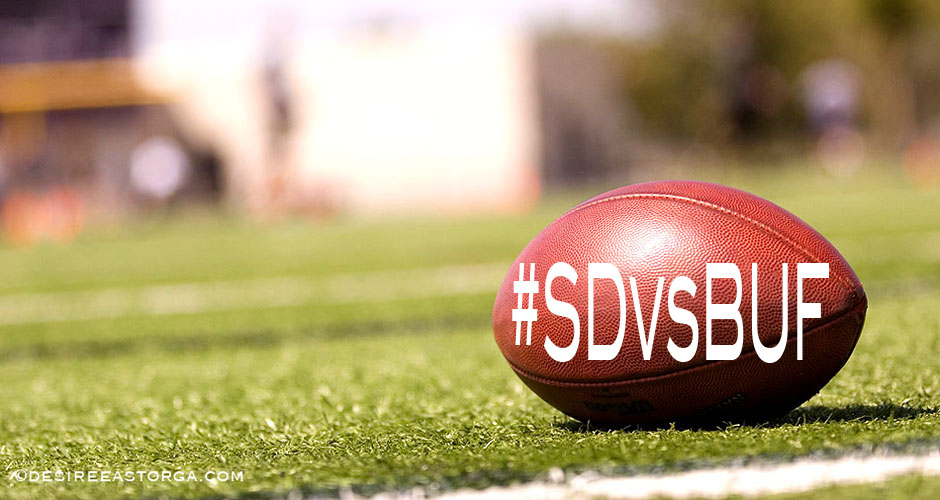 America’s finest city is still buzzing after taking down the World Champs on an extremely hot, white and humid San Diego day at the Q, Chargers travel just under 5 hours with a 3 hour time difference to an unbeaten Bills team, a new baby born game day and an AFC weekly player crowned.

Yes, despite all the predictions Bolts played keep a way from the Hawks and took 42 minutes of the game to a victory at the Q, where the temperature on the field reached 120, not to mention the humidity, which seemed to just invigorate the Bolts. Historically these seem to be the games the Chargers win, the ones, no one thinks they can.  By the way, at what temperature does a game become too dangerous to play in? Anyone?

Those are #Seahawks coaches holding tables up to make sun shades. Still think heat’s not a factor? #Chargers #NBC7 pic.twitter.com/sqilNN6Zpp

After a rough start with the #MNF opener in AZ, a sea of white hot Chargers fans welcomed Seattle with the team on the field dominating all phases of the ball Sunday, even with out some key players, with Hardwick out for the season, Flowers hamstring and Jarred Johnson wife going into labor in the wee hours on Sunday, Bolts didn’t miss a beat! Congratulations to Anna and Jarred Johnson on the birth of their second daughter Grace Anne. Quick notes on the game, a few missed flags, missed calls however, Chargers beat the Hawks down while keeping possession 42 minutes 13 seconds, along with 75 plays over Seattle’s 30,  it was hot and a Chargers white out at the Q.   Rivers to Gates repeated not once, not twice, but three times in the end zone, the last one a phenomenal one handed catch clad by 2 Hawks, 7 receptions for 97 yards and 3 TD’s.   Granting Antonio Gates with the AFC player of the week, #Rivers2Gates has a nice sound to it, especially if you’re a Bolts fan.  Chargers dominate Seahawks 30-21 and will fly northeast with a 1-1 record.

Phillip Rivers to Antonio Gates is 1 of the best combinations ever. #Truth — DeionSanders (@DeionSanders) September 14, 2014

8 plays was the longest drive the Hawks had, this is a double edge sword in some ways though, amidst the heat where all wanting a turbin, Chargers defense were unable to stop Turbin. However, they controlled the ball for 42 minutes vs. one of the best defenses, Richard Sherman was an obsolete issue. Rivers was awing, taking hits and scrambling making plays happen all day, while tearing apart the Seattle defense, all the while rocking a 61 on his helmet for long time buddy and center, Nick Hardwick. He ran and threw over them, was 28/37 for 284 yards with three TDs.

A few glitches; 3 times inside the redzone, Chargers had holding calls, Ryan Matthews two fumbles that were recovered by the blue and gold, but brought upon one more injury, MCL along with more of the same issues, loosing the ball.  Actually in the stats he wasn’t given credit for both?  I have had my doubts about his health and loose hands, but I don’t with Donald Brown and Danny Woodhead. That being said, one glaring statistic is the 3rd rusher on the team is Phillip Rivers, not known for his speed either.  With a total of 101 rushing yards on Sunday, 17 of those belong to Phillip.  Rivers locker room post victory, referring to all the media hating on Sunday Morning Countdown, always saying the Chargers aint got a chance, he finished with,

“We always got a chance!! Always gotta chance!!

Off to Buffalo, seen as one of the big surprises around the league, the Bills seem to have some magic going on. After a torrent of issues in the off season; the loss of Ralph C. Wilson, who founded them in 1959 (not just a loss for Buffalo but for the entire league), the diagnosis of all time great HOF Jim Kelly, the threat of the Bills being moved by interested buyer Bon Jovi to Toronto and even into the pre-season with doubts for the first string QB, EJ Manual. Buffalo has a new or a re-found enchantment which is rich with tradition, pride and an undefeated record. Jim Kelly announced he was cancer free, local billionaire Terry Pegula and family purchased the Bills along with keeping the team in Buffalo, Andre Reed inducted in the HOF and EJ Manuel finding his rhythm, (after some pre-season panicking and after picking up Kyle Orton for $5M), last week he showed everyone 32/48 for 375 yards, one INT and a rating of 95.4.  Add 2 phenom backs, Fred Jackson and CJ Spiller, who also had a 102 kick return in their 29-10 pummeling of Miami. Oh and don’t forget their number one draft pick, Sammy Watkins, who did participate in practice Thursday and former Trojan, Robert Woods (did not participate Thursday). Defense was plus 4 on turnovers as well, remember they also beat the Bears in Chicago, who just went to SF and beat the Niners. This will be a dangerously passionate game.  Chargers will need to be able to run the ball and stop the run, two things they have struggled with (ranked 27rd in the league for the run at 76.5 yards).  Working as a team, a family on the field has not been one of their issues, but a blessing, as they have a family in the realest sense. Kick off is at 1:00 PM EST, or 10:00 AM for PST, it’s a morning game for Chargers.

Head to head last 2 of 3 have gone to the Chargers;

Note worthy on the Injury report as of Thursday, Flowers,  Freeney, Luiget and Davis;  FP, full participation.  However; Ohrnberger, (back) who is in for Hardwick, Attaochu (hamstring), Troutman (back), Ingram (hamstring) and of course Matthews (knee) DNP = did not participate in practice.

Chargers OC, Frank Reich very familiar with Ralph C. Wilson Field, as still the longest back up tenure to Jim Kelly, let me refresh your memory, 1998,coined “the comeback” , Kelly suffered a strained ligament in his knee. Reich finished and led the upset, then taking them to the AFC Championship game vs. Miami.

One more bit of specialness, Junior Seau was nominated to the Hall of Fame, earlier this week.

Dynamite game wishes to the Chargers, should be a good one!! Sending dynamite football week wishes to you all!

Cheers, till next week!

First Downs and Flip Tricks
Time out with Desiree, the silver linings
An optimistic realist with intermittent football tourettes all the while searching for the 3rd dimension.
The Desiree Show
Photographer, producer, host, reporter, radio & TV, One-man-army, artist, skateboarder