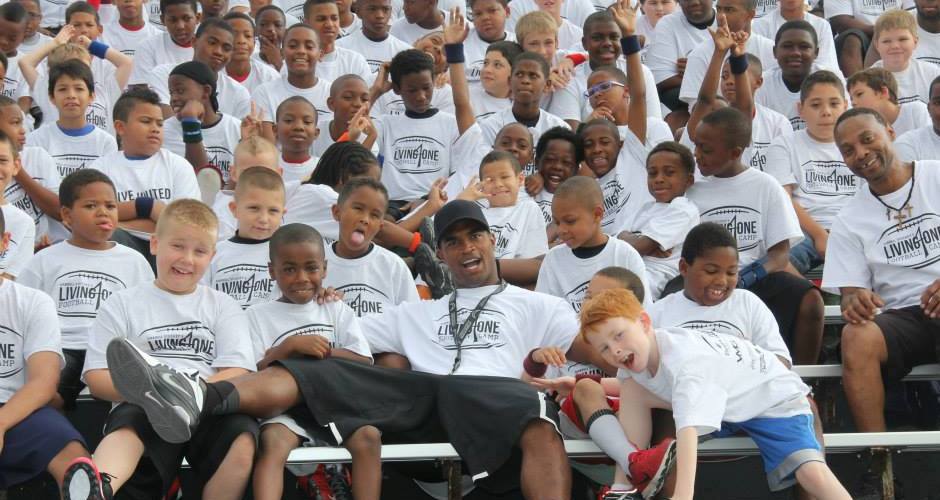 San Diego Charger Darrell Stuckey did not just come back to his hometown of Kansas City, Kansas to eat at one of his favorite local restaurants, “Go Chicken Go”; he came to give back to his community. Stuckey and 50 volunteer coaches held a youth football camp at Bishop Ward High School in Kansas City, Kansas. The program called “Darrell Struckey’s ‘Dotte’ camp” offers free admission to kids wanting to improve and display their football skills. Former Tulsa football player and camp volunteer Nick Henderson believes the free admission makes the camp unique. “We didn’t have free camps when we were young and I think it is an honor to have him [Stuckey] do this because people around here don’t give free camps and we give kids knowledge they could get from big programs.”

The community also appreciates how Stuckey is positively influencing its youth. Camper Brian Cobbins Jr. feels like he has improved within the camp. “We did position drills, form tackling and were put up against other players to see how we could compete.” Cobbins also thinks highly of Stuckey, saying that “he is nice and approachable, and welcoming when you try to talk to him.”

Darrell Stuckey feels dedicated to his hometown community and happy to be back home.

Pro Player Insiders: What does it mean to be back in Kansas City? And why did you decide to do a camp here rather than San Diego?

Darrell Stuckey: “I could have done a camp in San Diego but seeing how a lot of my teammates do camps in San Diego, I thought it was a great opportunity for me to come back home where I was born and raised Kansas City, Kansas and do a camp because we have never had a camp here. I know the Chiefs are here in Kansas City but we have never had somebody from Kansas City come back and do a football camp here that was a professional athlete, so it was an opportunity to have a football camp and I was very excited. The community embraced it very well. Everyone in the community definitely helped us and sponsored us a lot and gave these kids a great atmosphere to come out here and participate.”

DS: “I think my favorite part about this camp is the energy level of these kids. To come out here and see their faces, see them exhausted, panting, breathing hard. We have them speaking up loud and excited just to be out here. You know… to be honest, I am going to correct myself. I think my favorite part about today is the volunteer coaches. There are a lot of people I respect highly out here today. They all influenced me while I was growing up, whether I played against them, played with them, played for them or are coaches. Some of them I even mentored, they were a little younger than me at Washington high school or a different school. To have the opportunity to have a camp with over 50 volunteers who willingly gave up their time today is just a blessing. It is awesome for me because it makes it easy to come out here. I wouldn’t be able to talk to you right now if I did not have any volunteers out there working.”

PPI: So are the volunteers football players? Coaches from around here?

DS: “I have a lot of my friends out here working today. I played football at Washington with Isaac Write who now is a colligate player. I played against Nick Henderson who also played at Tulsa. Mike Hill is here from the San Diego Chargers, he is a running back this year who is from St. Joe Missouri. Justin Richman who I played against in high school is here today. Ghaali Muhammad, a linebacker from Wyoming who just finished up school is out here helping me. We also have a couple of little league coaches from Topeka out here helping out as well.”

PPI: Sounds like a great group of guys. So do you remember going to camps when you were growing up?

DS: “Yes I do, I paid for them. I went to a couple one-day camps and I also went to some college camps. There were never camps that were just held here in Wyandotte County or in Kansas City Kansas that were free of charge. The only free camp I remember going to when I was younger was NYSP, the National Youth Sports Program. That is at Kansas City Kansas Community College and I went there every summer from ages eleven to there on.”

PPI: What are you up to this offseason? Anything fun or any vacations planned?

DS: “There is a Chinese buffet by my house that I love. I cannot find any Chinese food like that in San Diego. Sorry San Diego. I also Love Go Chicken Go. I am pretty easy, I love Olive Garden and I also love Panera Bread. My favorite bakery around here is KD Cakes. KD Cakes is a local bakery that actually did my wedding cake. They also supplied us with some of the donuts and pastry’s that we had here today at the camp.

PPI: Tasty. So what can we expect of you from the chargers this season?

DS: “I was the special teams captain last year and I would expect nothing less of me this year. I should also have a big impact on special teams this year and also defense as well. I want to go out there and help out defense the best way I can. I have an opportunity to play some defense and help put us in a position to be successful.”

PPI: One last question. Is there a player in the NFL that you absolutely dread playing?

DS: “Antonio Gates. I play against him every day and it makes me better. And I push him to make him better. I hope he would say the same thing if he had the opportunity. I look up to him because he has taught me a lot just playing against him. Watching him and the way he analyzes his defenders makes me look at offensive players differently, and how to throw off their timing and everything. Also Phillip Rivers to me is a great quarterback. Not being biased but his release point and the way he looks at the ball and field is complicating. Give him some blockers and give him some time and he can destroy a defense.”