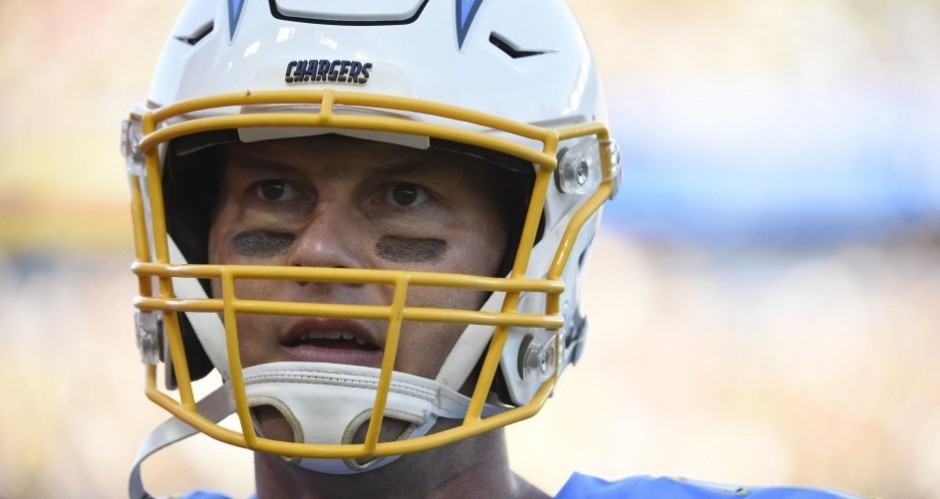 The London Char…..ok, ok, let’s assume for the sake of argument that they’re staying put. The Los Angeles Chargers entered their Week 12 bye with a 4-7 record, good for third overall in the AFC West, and a seemingly inevitable date with their couches come playoff time in January. After last Monday’s primetime stinker against the Chiefs in Mexico, there is perhaps more uncertainty than ever in the 16 years in which Philip Rivers has been at the helm of the Bolts’ offense. As the team gears up for yet another inter-division clash, this time with the lowly 3-8 Denver Broncos, we examine a plethora of issues surrounding this Chargers team moving forward.
Is Philip Rivers in their long term plans?
There is no denying that Philip Rivers is synonymous with San Diego Chargers football. But, is he the right guy for these Los Angeles Chargers after the conclusion of this season? Rivers is putting up numbers that are more reminiscent of former number one overall bust, Ryan Leaf, than they are an 8-time Pro Bowl quarterback. In his last two games alone, Rivers has completed just 45 of 83 passing attempts for 560 total yards, three touchdowns, and seven interceptions. More worrisome than anything else, his costly interceptions are coming at the most inopportune times, forcing the Chargers to play from behind and abandon their plans for a well-balanced air and ground game. With a multitude of young, promising quarterbacks available in next year’s NFL Draft – and the Chargers looking more and more like a lock for a top 10 pick – a changing of the guard might be happening sooner rather than later.
Is the ‘Gordon-Ekeler’ Conundrum messing with the team’s chemistry?
For head coach, Anthony Lynn, it has been no easy task re-introducing Melvin Gordon into the team’s offense after a contract holdout lasted into the first three weeks of the season. Arguably, Gordon has managed to finally shake all of the rust off and appears to be back to his usual self. Through seven games, Gordon has 369 yards on 100 carries, in addition to four touchdowns on the ground. His backfield counterpart, Austin Ekeler, has virtually identical stats (365 yards on 95 attempts) through 11 games – and remember, he was the primary back while Gordon was out. The use of these two running backs has become somewhat of a double edged sword. While it is great to have two successful running backs on your team, ensuring that both players get sufficient playing time is preventing both of them from finding a real groove through four quarters of a game. Additionally, because Gordon is known for his ground and pound style of play, and because Ekeler is seen primarily as a pass-catcher out of the backfield, it is allowing opposing defenses to shift accordingly and blow up most of the plays. Quite frankly, it needs to be one or the other. A steady dose of Gordon on the ground – or conversely – a healthy dose of Ekeler through the air might be just what this offense needs to get back on track.
‘Oh where, oh where has my Derwin James gone?’
The sophomore safety, who has missed all eleven games thus far in 2019, is “real close, real soon” to returning per reports by the NFL Network. James, a Pro Bowler in his rookie season, has been the toughness the Chargers’ defense has been missing all season, and his return might just be the identity the team has been seeking so desperately on the defensive side of the ball. Chargers fans are still chomping at the bit to see what this defense is capable of with a healthy Joey Bosa, Melvin Ingram and Derwin James.
Will the fanbase ever buy in?
The Chargers may have been the ‘home team’ in last Monday’s tussle with the Chiefs in Mexico, but the crowd sure sounded pro-Kansas City. Quite honestly, it’s felt like that at most Chargers home games this season. While this was rarely, if ever, an issue during their Qualcomm stadium days as the San Diego Chargers, the Los Angeles fans have yet to really buy into this team. With the new SoFi stadium set to open next season, there has never been a more apropos time for the fanbase to ‘back’ these Chargers if they are going to ever truly have a home field advantage moving forward.
Three of the Chargers remaining five games are against teams who are currently not in the playoffs if the season was to end today. Only time will tell.