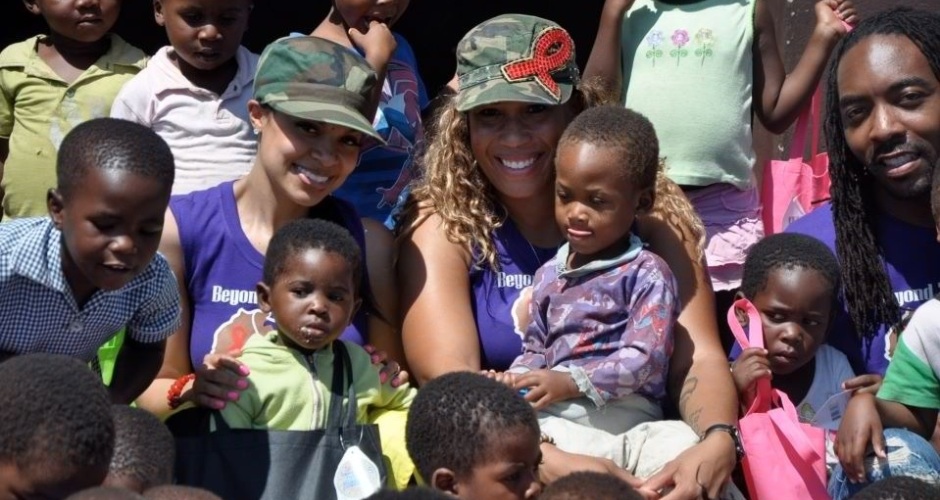 “Called to be a server”, is the phrase that was placed in Chanita Foster’s heart as a child and has carried on to be her life long mantra. Mrs. Foster may be best known for working in sports, for her husband (George Foster, a first round draft pick by the Denver Broncos in the 2013 draft), or her notable appearance on Vh1 Football Wives. But it is clear these things do not define her. What does define Chanita is her calling was to be a world changer and for this reason she has been nominated as OTFWPA/Pro Player Insiders NFL Woman of the Month.

PPI: So, I can donate a pair of shoes or donate soap for these children?

CF: Oh yeah! Definitely. The easiest way to help our foundation is to sponsor a child. Sponsoring a child through our foundation, is way different than sponsoring a child through any other organization. I try not to bash anyone out there who does it, but I think we’re the best at doing it. For $30 a month you sponsor a child and unlike other organizations, we don’t recycle that child. Some organizations will send a child’s picture to you and then the same one to the next person and then the next person. All of these people are getting this one picture of this one kid that they’re “so called” taking care of With Beyond the Game, when we assign you a child, that is your child for the year. So the $30 you spend a month goes towards that child. The relationship that you build with that child (the letters/emails that you send) we actually give to them to increase correspondence. I go to Africa every single month. So when people ask where my money is going, I can show you exactly where it is going. People also like the opportunity that if you sponsor a child through us, if you send a sweatshirt, I will take a picture of that child wearing it and send it to you. Most organizations can’t guarantee you that.

PPI: How did you meet Mr. Foster?

CF: (Chuckling) Quick story. Seven years ago, I used to put on a Madden tournament in Atlanta, Georgia when the new Madden game came out. As I was out and about, I ran into my husband . When I bumped into him, right away I said, athlete. Most people don’t know I worked with athletes for eleven years prior to my husband. So I’m able to spot an athlete out easily from a crowd. But when I bumped into him, I looked up and I said, “Where are you from?” He said, “Denver.” I was like, “Oh my gosh, you play football! (I totally called it.)” He asked, “Why do you say that?” I said, “You’re 6’6″, 320 and black living in Denver. You probably play football.” He laughs at that and responded by saying, “You’re such a racist.” I jumped back by saying, “I’m not! I’m saying what 6’6″ guy over 300 pounds and is African American lives in Denver just because he wants to live in Denver? You play football.” That was our initial conversation. He made it clear he wanted to date me but I didn’t really want to do the athlete thing. He was persistent and I remember him saying, “Just one date.” The rest is history.

PPI: What other teams has he played for besides Denver?

CF: He’s played for Denver, Detroit, Cleveland, New Orleans, and his last team was the being of this 2012 season with the Colts. He was very excited about the 2012 Colts organization and very thankful to them (as a nine year veteran) for giving him the opportunity to potentially close out his career with the team. He was very fond of the coach. It was a pivotal moment when he signed his Colts contract. Ironically, it was the first person who did his contract with the Denver Broncos sitting across from him doing his contract for the Indianapolis Colts. This guy had went from the Broncos to the Colts. It was this great thing that was transpiring in his mind. It almost seemed destined for him to close out with this team. They got a number one draft pick in (Andrew Luck) as their quarterback. The head coach was just so amazing to him. But the disappointment hit when he got hurt right at the end of preseason. He just knew that last injury was going to be the last time he played football.

CF (cont.): I definitely want to say thank you to the Indianapolis Colts family for a guy like my husband. When you get older, you’re just looking for the one last shot so you can go out the game like you want to go. They were giving him that opportunity. So he’s very thankful for that. I am very thankful for that. The coach (Charles D. “Chuck” Pagano) there was diagnosed with cancer and so I know my husband was very touched by that. The Foster family is definitely praying for Pagano and his family. It was a very difficult situation for us to end up back at home this season, but we’re very grateful and thankful for them.

PPI: What has been your favorite moment watching him play?

CF: The one moment that was life changing for me was after Hurricane Katrina. My daughter’s godfather is Charles Grant, who played for the New Orleans Saints. He is my husband’s best friend and they went to University of Georgia together. Most people think I’m an automatic football fan because my husband plays football. I’m not a football fan, but I got invited to the Super Bowl. Charles said, “You have to come.” I was thinking it was just another game. There was magic in that Super Bowl game. For me to be in that stadium filled with the people of New Orleans , affected by Katrina, was electrifying. It was bananas. The Saints were America’s team that Super Bowl. I got to sit next to people who had said they mortgaged their houses and did all this crazy stuff to get a ticket to the New Orleans Saints game. For them to win that Super Bowl was magical. I think that was one of my best Super Bowl moments.

PPI: What was your proudest moment watching Mr. Foster play?

CF: This is going to sound weird, but I think one of my proudest moments for George as a football player was when he joined the NFL Gospel choir. I know that sounds stupid, but I was really proud of him for that. I was proud to stand up and say, “That’s my man.” George is a lineman and his job is to block and protect. So to figure out if he’s doing something good on the field is kind of hard. George is never running the ball, or catching the ball, or throwing the ball, or making one of those kind of plays where people would notice. But to see him stand up for what he believes in, his religion, or something for young guys that isn’t considered popular, that was a proud moment for me.

For more information on Mrs. Chanita Foster (aka Mother of TeamFoster,Passionate Philanthropist,Entrepreneur,VH1 Football Wife,Baby Oprah) follow her @ChanitaFoster. Also be sure to “Change the World” with her by visiting www.beyondtgame.com .

–Ericka Lassiter,President of “Off the Field Player Wives Association”

@OTFPWA Contributed to this article