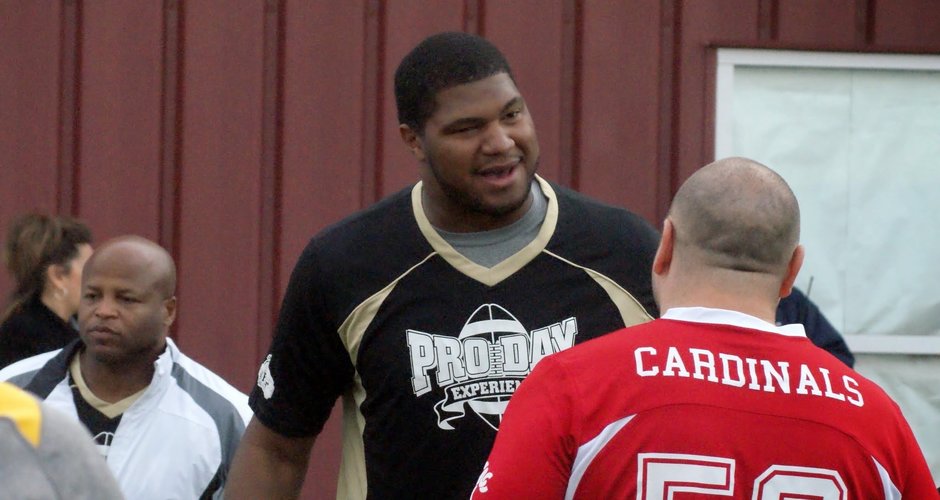 Two-time Super Bowl champion Byron Chamberlain and Arizona Cardinals Pro Bowler Calais Campbell, were helping Pheonix get into the football spirit this week. The two joined forces the to put on an “The Ultimate Pro Day Experience” for the high school students in the area, with all the proceeds going to the CRC Calais Campbell’s foundation.

“The Super Bowl is here in Phoenix and we wanted to do something for the community to increase the football spirit… just like we do with Christmas spirit,” Chamberlain eloquently said about his camp.

Participants were able to team up with current and retired NFL stars to compete as a team in a flag football tournament and individually in the All Star Skills Challenge.

Chamberlain noted the impacts of the pro coaching staff at his camp, “There’s a lot of kids here and there standing around in all looking at the amazing players we have about your coaching. ”

The exciting All Star Skills Challenge consisted of football drills that were the same training techniques utilized by NFL players during their careers. “I really think it great to teach these kids will NFL players do to train. I mean it’s great. To have the kids from the valley out here. My son, KJ Lassiter, is here playing with Hamilton High School. Having his high school coach here and watching Bryon coach his has been quite the experience,” former Arizona Cardinal Kwamie Lassiter explained.

The NFL players were just as excited to make a difference as the commute in the community as the kids were to work with them. “I am grateful to be here. I always enjoy supporting teamwork and bonding. I remember as a child loving these kind of events and really getting a lot from them,” former first round pick for the Giants, Jarrod Bunch said.

There was a combined point system between the flag football tournament and the All Star Skills Challenge. The winners played in a head to head game against the NFL stars. “It’s just been fun. To see the innocent love of the game from the kids has been unreal. In my nine years experience playing in the NFL, I hope I taught them today to go out there and take no prisoners.”

The proceeds from Pro Day Experience go to support the CRC Foundation; The Charles Richard Campbell (CRC) Foundation is a 501C3 that seeks to empower and provide self-awareness for future leaders through various programs. Some of these programs include: Calais’ Cheer for a Cause Cheer, a charitable initiative from Calais Campbell and the CRC Foundation that randomly selects a fan wearing a Calais Campbell jersey at every home game, making a donation to a charity of their choice; Christmas with Calais, where Calais and his teammates host a group of underprivileged children in the community, taking them on a shopping trip, catered dinner, and visit from Santa; and Right Track, After-school Program, that offers mentorship, life skills and development for young people between the ages of 6-14 years of age who live in the Phoenix Valley. By the supporting Calais Campbell’s 4th Annual CRC Foundation Fundraising Dinner we are supporting the programs mentioned.