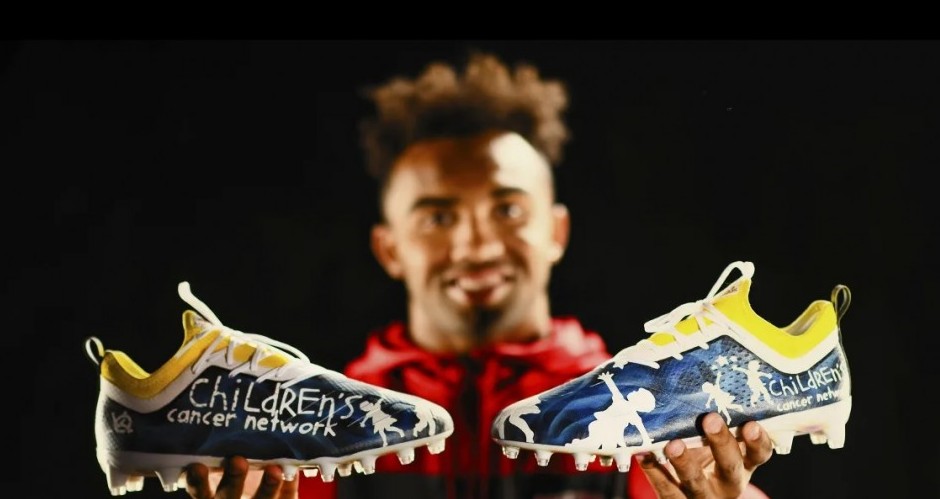 Some kids grow up wanting nothing more than to make it to the NFL. Other kids grow up wanting to be doctors, nurses, musicians, or artists. Regardless of where we end up, we all want to be able to express ourselves. If you are watching the NFL games this week, things might seem a little more vibrant. No, it’s not because of the new 4K television you may have scored shopping on black Friday, but rather because it’s My Cause, My Cleats week. My Cause, My Cleats rolled out in 2016 and gives players an opportunity to raise awareness about the causes that are important to them. From anti-bullying to cancer awareness, over 800 pairs of cleats will have an important message. The NFL typically has a strict dress code when it comes to the uniforms players don on Sundays. On game day, “Shoes must be of standard football design, including ‘sneaker’ type shoes such as basketball shoes, cross-training shoes, etc. Each team must designate a dominant base color for its shoes, either black or white (with shoelace color conforming to the dominant base color of the tongue area of the shoe). Each team must also designate one of its constitutional uniform colors as a dominant team color for its shoes. Each team must also designate one of its constitutional uniform colors as a secondary team color for its shoes. Each team may also designate a third uniform color as a tertiary team color that may be used for accents on its shoes” (NFL Rule Book). These rules will not apply during weeks 13-15.

Watch as some of our players participating in #MyCauseMyCleats see their cleats for the first time. pic.twitter.com/EOZFHg7XFq

It’s not just the players that are expressing themselves this week, but some of the most talented artists you’ve likely never heard of. The designs you will see on the cleats over the next few weeks didn’t come from a template in a Nike factory, they came from the hearts and skillset of our neighbors and our friends. Just like the players on the field, these causes have touched home with many of the artists – artists like Brittish Pena in Phoenix, Arizona. Like many of us, growing up Brittish Pena was one of the millions of kids who wanted to play in the NFL. Well, also like many of us, he wasn’t born with the gifts an NFL athlete needs to have to make it. He was however, born with a different set of skills – an artistic ability. When the My Cause, My Cleats campaign rolled out in 2016, Brittish knew he wanted to – correction, knew he had to – be a part.  The following year he was lucky enough put his artwork on cleats for players such as Arizona Cardinals quarterback, Carson Palmer, and $LB, Deone Bucannon. This year his passion has allowed him to become even more involved as one of the primary artists representing Cardinals players.

Another reason the My Cause, My Cleats campaign is truly special is found in its ability to make people feel connected to the game, and to the cause. In 2004, Brittish’s son Sebastian was born prematurely. Sebastian came in to this world weighing only two pounds, six ounces. He literally fit in the palm of your hand. Four years later, Brittish’s younger sister, Paris, was diagnosed with Leukemia at just 11 years old. It was a bumpy ride for the Pena family to say the least, but with help from some of the best doctors in the world and places like the Phoenix Children’s Hospital, their spirit never wavered. Sebastian and Paris were given the opportunity to grow in to the beautiful people they are today.

The Cardinals will wear their customized cleats in their week 14 home game against the Detroit Lions. In the coming weeks, artists like Brittish won’t just have the opportunity to see Cardinals players wear his artwork, he’ll get to see players use their platform to bring awareness to causes that have directly affected their families. Rookie wide receiver Christian Kirk’s cleats will be representing the Children’s Cancer Network and punter Andy Lee will be bringing awareness to Madelyn’s Fund. Madelyn’s Fund has a mission to support infant and pediatric patients in the NICU and their families, as well as those who experience the trauma of infant loss.

Other Cardinals player’s and their causes:

At the end of the My Cause, My Cleats campaign, players will auction off their cleats in an effort to raise money for their cause. The auctions will take place at NFL Auction and every dollar raised will be donated to the player’s charities. These auctions give fans the opportunity to take home game apparel worn by their favorite players while also giving back. If they told you football was just a game, they lied to you. It’s so much more than that.