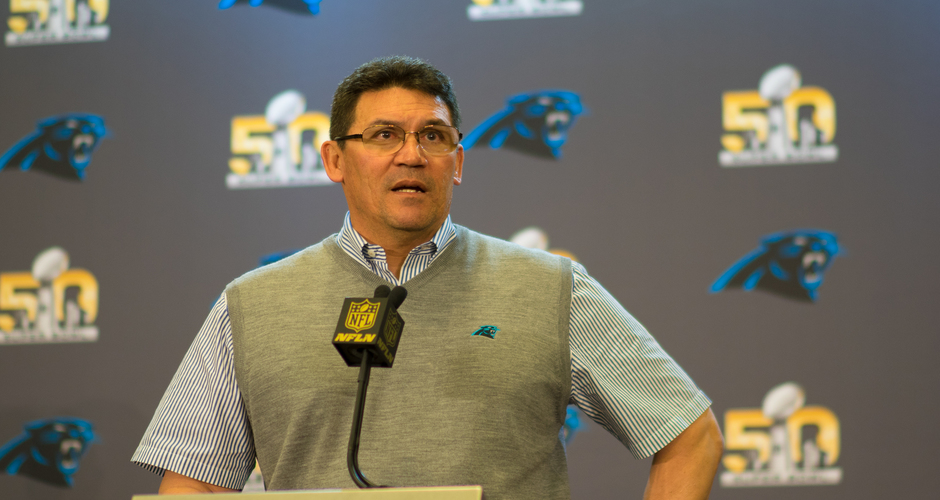 As Media Day Thursday kicked off for the Carolina Panthers, Cam Newton once again shrugged his way to the microphone, and once again he was asked a plethora of questions that he has either already answered, or that had nothing to do with football or Super Bowl 50.

The question of the day had to go to the brilliant mind asking Cam Newton why he was wearing socks with sandals.

A very frustrated and bewildered Newton began his response with a question of his own, “Why are you wearing jeans with shoes? It’s just comfort. I mean, we’re still at our team hotel, so it just gives you guys something else to talk about, you know? Especially, I told you, nothing has changed since 24 hours (ago), so if I see an article talking about my sandals and socks, that would be new.”

It’s pretty clear that Cam Newton is over press conferences by now. So we will move along and concentrate on some other Panther players and what they had to say.

Cornerback Josh Norman was asked about his pending Free Agency, but chose to keep that conversation for another day, “(Points to Super Bowl 50 logo) All that matters to me. And after that game, that’s probably when I have a sea upon a sea of questions about all that stuff. And that’s, I think, the most appropriate time to sit down and answer those questions or if they’ll be posed to me. But moment in time right now I have three days left and all my time and energy is focused on this right here.”

Norman has had an excellent year for Carolina, and the Panthers defense has only gotten better in the playoffs. But just like Cam Newton, after a long

week of media attention Josh Norman just wants to get on the field already. When asked if he was relieved to be able to focus on the actuall game Norman answered with, “That’ll be everything because this is definitely draining. It really is. I be ready just to play the game and if we played the game today, I’ll be like let’s go. Play it in the street really doesn’t matter. I’m just tired of sitting back and waiting, and talking every day and talking about the things that we’re gonna do – instead of going out there and doing them because I’m more so about action than anything else. It’s just we have to wait.”

Wide Receiver Corey Brown was on hand and like many of his team mates, he was just anxious to get to game day at this point, “Right now at this very second, it’s okay, but once I get the chance to put my cleats on and get to Levi Stadium I think it will be much better.”

PPI did find a happy face in Jared Allen though, when asked about how excited he was to be in the big dance Allen was more than willing to field the question, “It’s great. Hopefully my smile speaks for itself. There’s not a better feeling than being here right now and being able to play in this game.”

Allen also stated that his (previously broken) foot was “Great” and that “Everything is phenomenal.” The NFL veteran received “laser” treatment to help speed up the healing process, and the twelve year pro has practiced well this week.

Another injury that was overcome for the big game was the broken arm of Thomas Davis, an injury that literally happened just a couple weeks ago vs Arizona. The Carolina Linebacker has insisted that he would play all along, after hearing from the doctors.

“When I initially found out, I didn’t think that I was going to have the opportunity to play in this game, but from my doctors looking at the images, seeing where the break was and seeing that they could go in and fix it, they told me immediately, ‘Hey, we can fix this, and we can have surgery in the morning.’ From that moment on, I was excited, and it was all about the rehab process.” – Thomas Davis

As for the head coach, Ron Rivera was asked about possible feelings on the eve of the Super Bowl. Rivera stated that he was rather pleased with the preparation this week, “It’s going to be interesting to see how things are. The thing I’ve been really pleased of is how we’ve prepared so far. I really liked last week. I thought, us as coaches, game planning, putting things in place that we needed. The players working with the coaches all week last week in terms of that preparation. So we’ve put all that to bed. Now we start working and focusing in on the things we need to in terms of refining the game plan. I’ve been really pleased with that. I liked yesterday’s practice. I thought the tempo was exactly what we’re looking for. We made few mistakes, things we have to get corrected, but for the most part we’re pleased with what we’ve got from our guys.”

Pics (minus Dr. Evil) by @LIVELYNOW