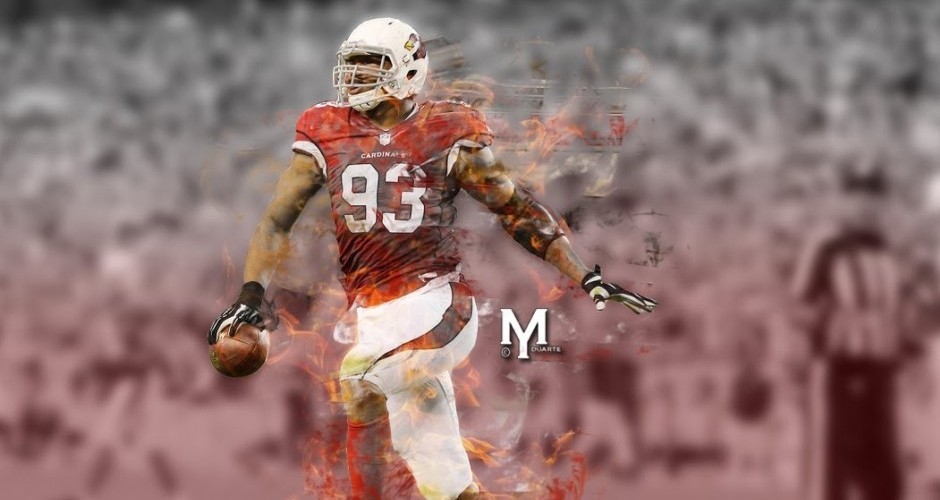 Calais Campbell of the Arizona Cardinals has always loved the game of football. From the young age of 6, Calais played football with his other brothers in The Mile High City. He would attend South High School and would start on the varsity football team as a Freshman while showing his strong work ethic that his father taught him.

He would graduate in 2004 from high school and would be ready start the next chapter in his life and head to The University of Miami. He would graduate in only 3 ½ years from the U in Advertising and Marketing and although he had some football eligibility left, Calais would decide skip his final year of college to enter the 2008 NFL Draft. He would be selected by the Arizona Cardinals with the 50th pick overall and would get a taste of the big stage right off the bat.

When asking Campbell to think back on Draft day he summed it up with just one word, Entertaining! He would also mention how he remembered the whole first round passing and all he wanted was my phone to ring. Friends would call him and he just remember telling them “man my phone is supposed to be clear just in case someone is

trying to call me”; don’t call me… I’ll call you. He recalls the Draft as a special day for him and the entire Campbell family, adding it was a dream come true.

During his rookie season the Cardinals would end up going to the Superbowl which Campbell expresses as an “incredible feeling and amazing experience”. He admitted that his first year he didn’t really appreciate the Superbowl run as much as he does today. Recalls the season as a dream come true and wishes to someday get back to the big game. From the fighter planes flying over the stadium, to the National Anthem being sung, the clear emotion, all led to a dream game. The Superbowl provided the perfect atmosphere, the crowd, the noise, the thrill, the game, itself!

Knowing Campbell’s strong work ethic and dedication to become a better player, the Arizona Cardinals have a strong piece for their future and are that much closer to returning to the big game. He remains hopeful and as every season comes there is only one goal, to with the Championship!