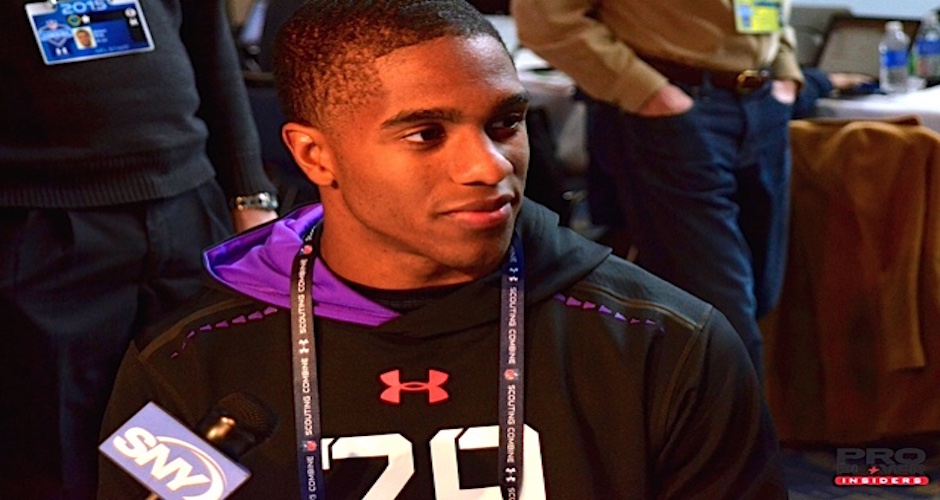 Byron Jones nearly broke the Internet with his unprecedented showing at the 2015 NFL scouting combine. Jones’ performance in the broad jump resulted in a NFL-combine record and world-broad-jump record. He also had the best vertical jump, and 60-yard shuttle at his position at the combine.

Converting from free safety to cornerback as a junior, Jones collected 60 tackles and three interceptions in 2013. At the onset of the 2014 season, newly appointed head coach of the UCONN Huskies Bob Diaco deemed Jones to be one of the best cornerbacks in America.

Jones possesses the uncanny ability to break on the football, which routinely shows up on film. He is especially patient in his backpedal, which enables him to read his keys and close on the quarterback’s intended target. Merely playing through the receiver’s hands isn’t good enough for Jones. He’s able to track the football and use his exceptional athleticism to catch the ball at its highest point.

Below is an example of Jones’ recognition, makeup speed and ball skills:

Jones’ workout numbers at the combine are as follows.

Jones is remarkably mature for his age and it came as no surprise to many when he humbly gave credit to his parents for his performance.

Thanks for all the love! I swear I had no clue I was going to jump 12’3″ like wow! Shout out to mom and dad for the good genetics ✊

Jones did not run the 40-yard dash at the combine, as he wanted more time to train for the event following his shoulder injury. Jones’ shoulder injury caused him to miss the final five game of his football career at UCONN. While his combine numbers were outstanding, his game film is also impressive as his film is emblematic of a third round pick at minimum. With that said, his performance at the combine could potentially entice a team to take him in round two.

In the video below, Jones discussed key skills at the cornerback position, how he ended up at UCONN and more.