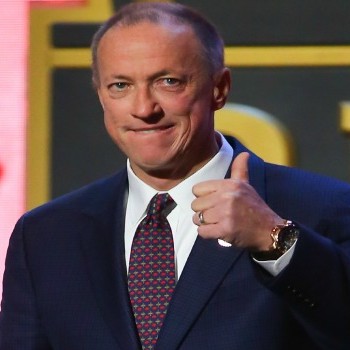 One die hard Bills Mafia fan and community philanthropist in Buffalo, NY sent in a touching letter regarding his support for the legendary #12. This letter breaks down exactly what the Western New York community does for their hometown athletes, particularly Jim Kelly. Ryan Stang, of Hamburg,NY,  has rallied fans and raised over $100,000 for Jim’s Kelly for Kids Foundation.

Thank you once again to Ryan Stang & the Buffalo Spikes for Tykes volunteers and sponsors!

Posted by Kelly for Kids Foundation

Below Stang takes the time to tell the NFL community why he puts in so much time for the Hall of Famer and the disabled kids Kelly supports.

Sometimes we honestly don’t know how good we have it.

My name is Ryan Stang, founder of an event called Buffalo Spikes for Tykes. The purpose of this event is to bring together our community, both individuals and businesses, even if just for one day to give back to disadvantaged and disabled children right here in our backyards. I’ve teamed up with former Buffalo Bills quarterback and NFL Hall of Famer, Jim Kelly, and his Kelly for Kids Foundation to do just that.

Nobody knows to treat every day as a blessing and a gift more so than Jim. If you’re familiar with his story, you may have heard for the last few years he’s been battling a bout of cancer that has taken him to lows he’d never thought he’d experience. Each and every moment a mental and physical battle of survival. But Jim being as strong and as his family calls it “Kelly Tough” as he is, he prevailed and beat the cancer becoming an inspiration to millions in the process. But although Jim has suffered this hardship the last few years, he’s been dealing with thousands of children whom have dealt with either similar hardships or severe life altering obstacles since he started Kelly for Kids back in 1986.

Since it was established, Jim has given the WNY community nearly 5 million dollars through grant distributions. Some of the charities include Cradle Beach Camp, Kids Escaping Drugs, Wings Flight of Hope and of course, Jim’s son’s foundation Hunter’s Hope, just to name a few.   Buffalo Spikes for Tykes is another outlet to give these children one thing they don’t always receive, opportunity. It’s gives the blue collar people here in Buffalo the chance to come out and not only have a great time, but give back to these kids in the process, whom I truly believe are one of this city’s greatest assets. The event itself is focused around a co-ed volleyball tournament accepting of all experiences. Typically the event generates 200 or 300 participants with another 400 simply partaking in the environment. It does take place right on the shores of Lake Erie at Woodlawn Beach in Hamburg New York so it’s a place you’ll want to be anyways on a hot summer afternoon. The drinks will be cold and the food will be hot and it’s all included with your ticket. Majority of the people who walk through the gates will receive a Buffalo Spikes for Tykes T-shirt and will have the opportunity to bid on items that they may never have the opportunity to obtain elsewhere. Past items have included autographed jerseys from Kelly, Andre Reed, Bruce Smith, Thurman Thomas, Drew Brees, Robert Griffin III, Sammy Watkins, Buffalo Sabres players, Buffalo’s own Patrick Kane and Rob Gronkowski. Also, items such as signed footballs, professional sports merchandise, gift baskets, and gift certificates from all over WNY. There’s live entertainment throughout the day including live music from many of the city’s top performers and DJ’s. You’ll even possibly be able to meet former and current Buffalo Bills who swing by to support the cause.

Since we’ve begun working with the Kelly for Kids Foundation we’ve raised around $100,000. For many whom have participated, it’s the one day a year in which they give back and have confidence they’re supporting a foundation which has a direct impact on them. It’s really not difficult to make an immediate difference in someone’s life. But it does involve taking action. Whether it be a business sponsoring the event, an individual playing in the volleyball tournament, someone stopping by for the various other activities taking place or one of many volunteers who make the day so successful; everyone plays a huge role in giving these kids who NEED us the opportunity for a better life. As I originally stated, we don’t know how good we have it. Buffalo Spikes for Tykes will assist us in opening our eyes and show you the true meaning of why we are the City of Good Neighbors. See you Sunday August 23, 2015 at Woodlawn Beach!

For more on Buffalo Spikes for Tykes and how it supports the Kelly for Kids Foundation check out their facebook page : https://www.facebook.com/buffalospikesfortykes.