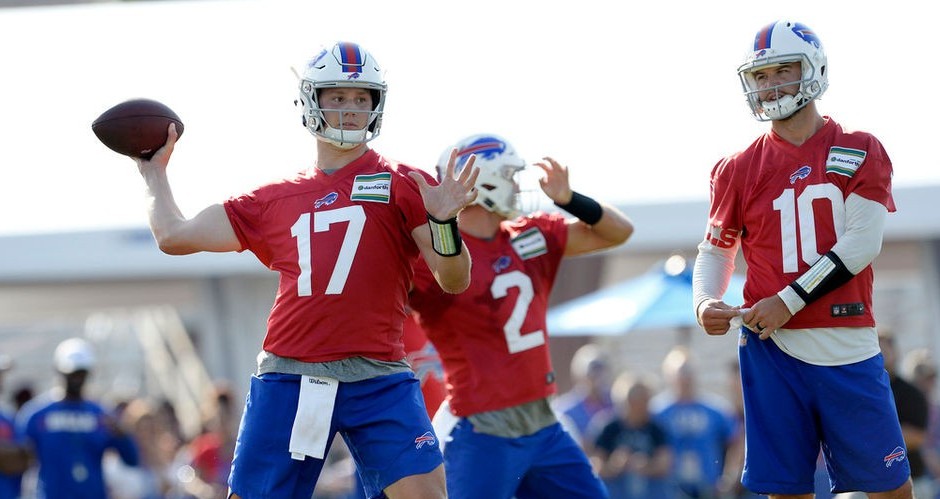 As the Buffalo Bills check into training camp this week at St. John Fischer in Pittsford, NY, there seems to be more questions facing the Bills than there are answers. Who will be the starting quarter back on opening day? Who will that quarterback be throwing the ball to? Will the All-Pro running back be taking handoffs? Who will be the individuals blocking for the running backs? Will the defense be better against the run that saw them finish 27th in the league last year? And will this coaching staff be able to duplicate the magic they wielded last year that helped end the 17 year playoff draught?

With all of these questions looming, what expectations should fans have as far as an outcome for the season? Las Vegas has the number of wins at 6.5 for the year. Many so called experts have them finishing even worse, while some of their biggest supporters have them taking a small step back and see them finishing at 7-9 or at best, 8-8. So what is a realistic expectation for this team? A repeat performance of the magical 2017 season is not as far-fetched as some may have you think.

The defense, which ranked 27th against the run, had 4 games that really skewed their ranking and were much better than their ranking indicates. The addition of some bodies up front will likely help against the run and the secondary should pick up where they left off last year. This will be the second year in the Leslie Frazier, Sean McDermott defense, which should help the players considerably as they will be more comfortable in the system and can react more and think less. It would not be surprising if there was a marketed improvement in the defense.

The 2017 Buffalo Bills, as a team, averaged just shy of 19 points per game under Tyrod Taylor. If you factor in the defensive touchdowns, the number dips to less than 18. So, is it that hard to envision an offense that scores at least that no matter who is under center? Each of the three possible opening day starters have their upsides as well as their flaws, but each will most definitely take more chances than Taylor. If the starting offensive line is chosen early in training camp and can get some continuity during the preseason games, the loss of Eric Wood and Richie Incognito will not be as drastic as you might think. Ryan Groy and Russell Bodine will compete for the center position. Groy filled in admirably for Wood when he broke his leg in 2016 and Bodine has been a starter at center for the last 4 years in Cincinnati. There will be a healthy competition for the starting guard position but the line, although they may have some growing pains, will not be the swinging gates that many predict.

It is safe to say that either, A.J. McCarron, Nathan Peterman or Josh Allen will be under center to start the season. What isn’t so clear is who they will be throwing to. Kelvin Benjamin and Charles Clay are the easy answers, but after that, it gets a little difficult to say for sure. Zay Jones, Jeremy Kerley and Andre Holmes are possible answers and although they should not be confused with Julio Jones or Antonio Brown, they are capable receivers who may just find a connection with one of the quarterbacks.  Keep an eye out for Brandon Reilly, Rod Streater or Robert Foster. Each may have a legitimate chance to make a difference in this offense.

LeSean McCoy, right now, is the wild card in the offensive equation. If things stay the way they are right now, he will be the opening day starter at running back. If that happens, things look bright for the Bills. He is the great equalizer.  He is a dynamic runner; he can catch the ball out of the back field and can make some plays that few in the league can. With him on the field, defenses will have much more to think about when game planning to face the Bills.

Brandon Beane and Sean McDermott continued this year to bring in players that seemed to fit their idea of an ideal teammate. They will trust PROCESS and there is no reason to think that they will not be able to get the most out of the talent they have. They have also had a year to learn so some of the mistakes made last year will not reoccur.

So now with some of the questions answered, who’s to say that 9-7 or 10-6 is unrealistic? The Bills should have a much improved defense, an offense that is willing to take chances to help them put up more than 2 touchdowns and a field goal a game, a solid special team unit that ranked 7th in the league last year and a coaching staff with a year under their belt and the propensity to get the most out of individuals. Why not 10-6? It may take a lucky bounce, a call that goes their way, or a little bit of magic to get there, but it is certainly not out of the question…Enjoy the PROCESS.