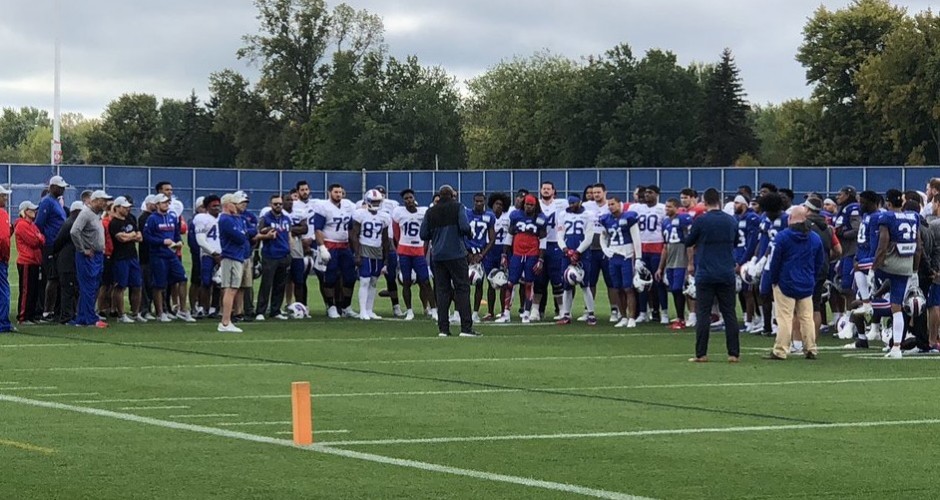 On Thursday, Hall of Famer and Buffalo Bills legend, Bruce Smith, addressed the team heading in to their week six matchup against the Houston Texans. The timing couldn’t have been more perfect. Buffalo will be on the road in Houston and up against one of the most dangerous offenses in the league in a Texans team that currently ranks fourth in total yards gained. The Bills will need every bit of legendary advice they can get.

Smith spoke to the team just after stretching and was able to share his thoughts on what he felt it meant to be a Bill. “Throughout my 19-year career, people would always ask, ‘What’s the secret? How did you do it?’ Well, the secret is there is no secret,” Smith said. “There’s no substitute for hard work, preparation, dedication and mastering your trade. While there are no secrets, I did give them tips on how to become a dominant player. How to make the game slow down. How you have the opportunity to level the playing field.”

Hopefully Bruce was also able to give a little advice about how to stop a man as dominant as he once was because the Bills will also need to worry about stopping superstar J.J. Watt from getting to their rookie quarterback. J.J. comes in to the week leading the league in sacks with six (tied with his brother, T.J. Watt, and Geno Atkins). J.J. also leads the league in forced fumbles (4) which could present a problem for Josh Allen as the rookie signal caller leads the NFL in fumbles with three. Allen has certainly had his challenges through the first five weeks of his career but one thing is clear – he’s hungry to win. Even Texans defensive end, Jadeveon Clowney, has recognized that. “He doesn’t give up,” Clowney said. “He doesn’t quit on a play, he tries to make a play on every play. He’s the heart and soul of that team right now. When he goes, they go.” With offensive line play as poor as it’s been in Buffalo, Allen may have to be in the go a lot this Sunday. Whether it be designed, or forced, look for the rookie to use his feet early and often against a deadly Texans pass rush.

While Watt and Clowney could present problems for Allen and the offensive line, if there’s an area that the Texans can be exploited, it’s in the pass game. Their secondary is hurting. Just a few days ago Houston placed cornerback, Kayvon Webster, on injured reserve where he will join fellow cornerback, Kevin Johnson. They’ll also be without Aaron Colvin indefinitely due to an ankle injury. We know that Allen has a big arm and likes to chuck it deep so this week could provide an opportunity for receivers Zay Jones and Kelvin Benjamin to make a big play.

On the defensive side of the ball, Buffalo will look to attack Houston in a similar way.  The Texans offensive line has also been an issue. Quarterback, Deshaun Watson, isn’t at full strength – being hit 54 times and sack 18 times through five weeks will do that to you. The only quarterback sacked more than Watson? Josh Allen. Look for Buffalo to try everything they can to get after the quarterback. However, the Bills will need to be careful as Watson is just as dangerous on his feet as he is in the air. He’s averaging just over 40 yards rushing a game and about a third of his rushes result in first downs. Should Buffalo fail to get to Watson, they will depend heavily on Tre’Davious White to contain superstar wide out, DeAndre Hopkins. Even at less than full strength, Watson has been able to throw for 375 yards in each of his last two games and Hopkins currently leads the NFL with 594 yards receiving.

The Texans may have started the year 0-3, but are winners of two straight. Buffalo’s D has been solid as of late, but if they want to keep up with high-powered teams such as the Texans, the offense is eventually going to need to jump in and help out.

Kickoff is scheduled for 1pm, Eastern Time at NRG Stadium in Houston, Texas. The Texans are favored to win by 10.