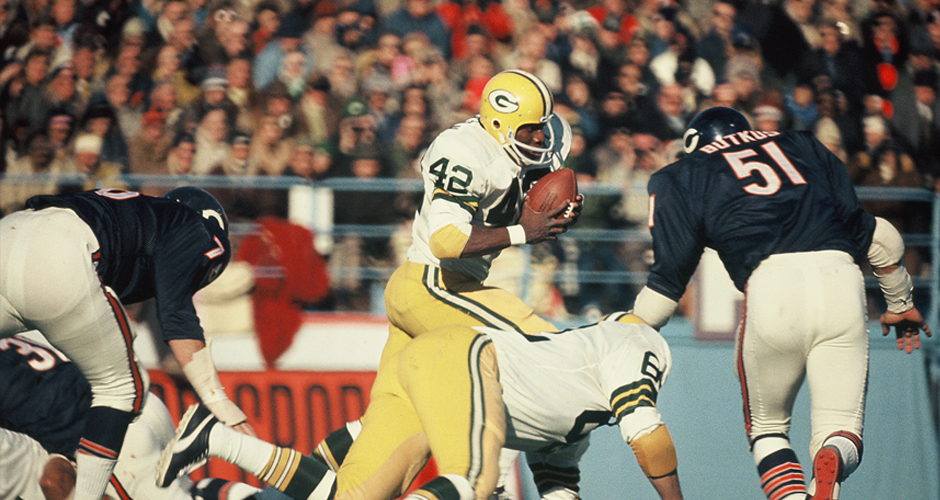 Picture former Green Bay Packer John Brockington rushing toward you, meeting him head on , and having to take him down. This thought will turn out just as expected…with gold and green powering by, breaking the attempted tackle. With a running style based on his strength, Brockington formed into a power running back- a player who broke tackles and ran over defenders instead of running away from them.

Brockington was a “beast,” which can be seen merely by looking at his big career numbers. He was a 3 time Pro Bowl selection in the years of 1971, 72’, and 73’. All-Pro selection in those same years, and in 1971 he was selected NFL Offensive Rookie of the Year.

Finally, he was the first ever NFL player to rush for 1,000 or more yards in each of his first three seasons. Brockington was selected in the first round, ninth overall in 1971 by  the Green Bay Packers where he resided from the 71’ season to 77’ when he  was released after the first game. The Kansas City Chiefs picked him up to finish out the season, then he retired soon after. Overall, Brockington rushed 1,293 times for a total of 5,024 yards, averaging 3.9 yards a carry.

This Packer had a very successful college career playing halfback and fullback for the Ohio State Buckeyes from 1968 to 1970. He was only a sophomore when he led the Buckeyes to an undefeated season and a national championship in 1968.

He was the featured running back in head coach Woody Hayes’ offense and finished his senior season with 1,142 rushing yards, which was at the time an Ohio State single-season record.

Another opponent John is not running away from and ready to tackle is kidney disease. Enter Brockington’s big heart. After John hung up the cleats,  he started a foundation in 2002, after receiving a kidney transplant from his friend, now wife, Diane Scott. The John Brockington Foundation was  created to aid others impacted by kidney disease. The foundation With his  provides free screenings and educational material to those who require it, as well as  food vouchers to dialysis patients. And to shorten the wait for all organs, each April JBF leads one of the largest organ donor registration drives in Southern California, their  FanForLife campaign.

This Brockington and The Fairway Partners are hosting the John Brockington Foundation Celebrity Golf Classic  in support of  the foundation that so many people have benefited from. Golfers include: Andre Reed , John Howard, Bill Griffith, Billy Ray Smith, John Kentera, Randy Jones, Pete Shaw and Willie Buchanon, all showing  their support of John, his foundation, and its mission. This mission is “to create a culture in which organ donation is commonplace; to provide financial and resource support for those donating, awaiting, and/or receiving organs; and to promote health education to minority communities who are disproportionately represented on the transplant waiting list.”

More of Brockington Big Numbers and Big Heart- Below are John’s foundation accomplishments in the last year:

Where: La Costa Resort and Spa

A Look Back at Big Numbers Brockington: