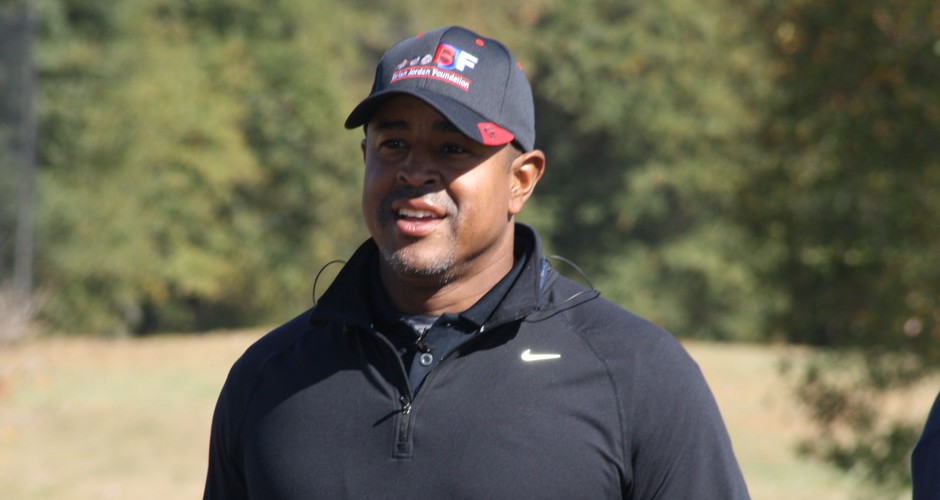 Two-sport superstar Brian Jordan spoke with Melissa Mahler about the inspiration behind the Brian Jordan Foundation and the 9th Annual Charity Weekend October 24-26.

Brian Jordan believes education is the key to unlocking the doors to success. In 1998 he created the Brian Jordan Foundation (BJF) with the mission of helping young kids achieve a college education by providing scholarships, mentoring and friendship. While he was growing up his mom taught in the same high school he attended. Brian laughs when he says he wouldn’t wish that on any kid but adds lovingly she was his inspiration.

“After I would get out of class I would go visit my mom’s class, and would just watch her pour hope into those who were a little disadvantaged. I knew in watching her that I wanted to give back if I ever reached my dreams and give kids hope like she did.”

Brian’s dad also instilled in him the importance of education. “My dad was a steel worker and he did not want his sons working in a steel mill. He stressed [to us] get your education and work hard in sports and you never know what’s going to happen.”

For Brian a lot happened. He played three seasons in the NFL, 15 seasons in the MLB and is one of only two athletes ever to have been named as an NFL All-Pro and MLB All-Star.

His dad passed away a year and half ago but his mom still watches every broadcast he does on the Braves live. “She’s calls me after the show, she texts me after the show, ‘hey, you said this…you didn’t use it in the right context.’ It’s awesome my role model is still there.”

Brian says he enjoys “sharing his message and stories with young kids and giving them hope, motivating and inspiring them to believe in themselves.” More importantly he tells them, “to go out there and work hard and you can achieve anything in life.”

This month Brian is continuing his work as a role model by hosting multiple events around Atlanta from October 24-26 to raise funds and awareness for the Brian Jordan foundation. The goal is to fund 16 college scholarships for high school students in 2016. The charity weekend includes both private events and ticketed events open to the general public. For more information or to register for the event visit www.BrianJordanFoundation.com.

“It’s a great weekend and I get a chance to see my mentors like Ozzie Smith and Willie McGee who really helped me tremendously when I got signed with the Cardinals and they came up for my debut. They really showed me the way. Also when my former teammates come back and enjoy these events with me it’s fun. I’m so appreciative for guys willing to take the time to help out.”

“We have a Ping-Pong tournament, a 9-ball shooting bowling tournament at Dave & Busters the first night, and then we have a 2-man scramble where a sponsor plays with a celebrity. You know it’s always competitive when you get athletes together. At night there’s a draft party where the sponsors and the teams get to select the athlete they want to play with. This year, we have Matt Stillwell, a young up & coming country singer out of Nashville, coming to entertain along with a hometown comedian here in Atlanta Jonathan Slocum.

On Monday golf gets started with the ball drop. I have a helicopter fly over and drop all the balls that guys have bought and signed their names, and you win a big prize if yours is closest to the hole – and that starts the golf event off.”

The weekend events include:

Saturday, Oct. 24 @ 6:30pm – Fans Compete against the Celebrities in tournament-style events (bowling, billiards and Ping-Pong) to win prizes and raise money for literacy. Open to the public, the event is held at Dave & Busters in Lawrenceville (5900 Sugarloaf Parkway) and includes dinner.

Sunday, Oct. 25 @ 11:00am – Two-Man Scramble Golf Tournament at Chateau Élan with a shotgun start. Celebrities are paired with sponsors for this event.

Monday, Oct. 26 @ 10:30am – Celebrity Golf Classic at Chateau Élan with a shotgun start. Celebrities are paired with each foursome and there are spot prizes throughout the course.

“Every scholarship I give out, I encourage the student to come back and work at my camp so they can show how it makes a difference in the community.” Brian shared a story about one inspiring scholarship recipient. “I went to an event at a law firm and who do I see? I see Marquis who was one of our first scholarship recipients. He came up to say ‘thank you for the $16,000 you gave me so I could attend Morehouse.’” Brian was wowed. “Here is this mature young man, shaking my hand, trying to buy me a drink and thanking me at the same time. That’s what it’s about – seeing him graduate, being successful and working in the community.”

For more information about BJF, registration and sponsorship visit www.BrianJordanFoundation.com.

Special thanks to Rob Kremer of CO&P Integrated Marketing