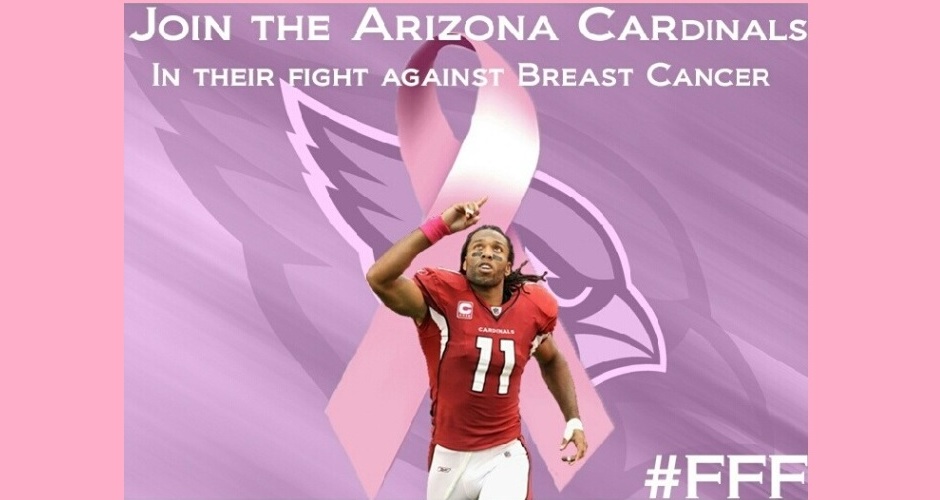 Every Sunday we watch our favorite football team play their hearts out, battle on the gridiron to be the best that they can be.

In October the National Football League helps spread the word on a greater battle; Breast Cancer. During October the NFL helps raise money through a campaign called “A CRUCIAL CATCH”.

Throughout the month, players, coaches and referees will be wearing pink game apparel to help raise awareness for this important cause. All pink items worn by players during these games will be auctioned off on “NFL Auction” with proceeds benefiting the American Cancer Society.

One player who puts his heart into the fight against Breast Cancer is Larry Fitzgerald of the Arizona Cardinals. Fitzgerald who is one of the most profound wide receivers in the game lost his mom Carol due to this disease back in 2003 at the young age of 47. Since then he has made October a focal-point in the season to contribute using his personal play and Social Media status.

Last year Larry donated 25 cents for every new follower he got on Facebook and Twitter during the month of October. He also donated $5,000 for every touchdown and $1,000 for every reception which has changed this season to $10,000 per touchdown while maintaining $1000 for each pass caught.

Nike also got involved and designed a pair of custom cleats to help Fitz honor his mom. They made him Vapor Talon Elite cleats, almost entirely pink, with the name “Carol” inscribed along the side.