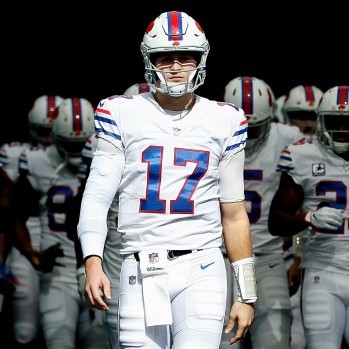 After a frustrating loss down in Miami, the Bills are headed back home in week 14 to take on another division rival in the New York Jets. This will be the first head-to-head matchup between rookie quarterbacks and top 10 picks Sam Darnold and Josh Allen – a matchup both teams hope to continue for many years to come.

In the Bills and Jets first contest of 2018 back in week 10, the Bills smashed the Jets 41-10, but neither rookie was present. Darnold went down with a foot injury in week nine and hasn’t taken part in a game since. Allen suffered an elbow injury in a week six game against the Texans and didn’t return to action until week 12 against the Jaguars – a game the “trash” quarterback led his team to victory.

The Jets and Bills won’t be making any playoff appearances this year, but this is still a very important game for both teams. Patriots quarterback Tom Brady owns the division but he is only getting older – we think – and soon the division will be up for grabs – we hope. This Sunday Buffalo hopes to make a statement that they are just a few key pieces away from being heir to the throne.

The scoreboard isn’t always pretty for the Bills, but under Head Coach, Sean McDermott, the Bills continue to show fight. If it wasn’t evident with the release of wide receiver, Kelvin Benjamin, Buffalo is looking towards the future and is going to run with guys that are passionate about playing football. Undrafted free agent Robert Foster has collected six receptions for 226 yards and a touchdown in the past three weeks – Benjamin had amassed just 354 yards total in his 12 weeks before being released. Look for Foster and second year wide receiver, Zay Jones, to continue to be a part of the young heartbeat of Buffalo’s offense.

The Jets defense comes in to Sunday’s matchup ranked 26th in stopping the run. To make matters worse, they just lost inside linebacker Darron Lee for the season. Lee was slapped with a four game suspension for violating the league’s substance abuse policy. Buffalo will most certainly look to take advantage of Lee’s absence using the legs of LeSean McCoy and rookie QB Josh Allen. In the past two weeks, Allen has rushed for 234 yards and a touchdown. Lee’s suspension should also making passing a bit easier on the young gunslinger. The suspended linebacker had racked up three interceptions to go along with his 74 tackles and is looked at as one of the better cover linebackers in the NFL. While Lee may be out, the Jets still have second year safety, Jamal Adams, and he is looking for payback. “They came in and they whooped us,” Adams said. “They don’t like us. We don’t like them. It’s going to be a tough battle. “It’s a divisional opponent. We just go at it each time we see each other. It was personal. They came in and put up about like 40 points on us. As a defense we got to come out there and do the right thing so that doesn’t happen again.” Adams has graded out as one of the top overall safeties in the league this season and isn’t afraid to hit someone – just ask Julian Edelman.

Do not try and block me! pic.twitter.com/wNct3LgDV7

In his first game back from injury, Sam Darnold and the Jets offense won’t have it easy. The Bills may be 4-8 but it isn’t because of their defense. Buffalo heads in to Sunday having the number one ranked pass defense and are second in total yards given up per game (294.2). The Jets will also look to get things rolling on the ground with running back, Isaiah Crowell. Crowell is averaging a respectable 4.8 yards a carry this season but in his first matchup against Buffalo this year he was stifled for just 19 yards on seven carries. He too will be looking for a little bit of that payback.

The Bills are favored by four (-4) and kickoff is scheduled 1pm (ET) and the temperature at kickoff will be a chilly 30 degrees.