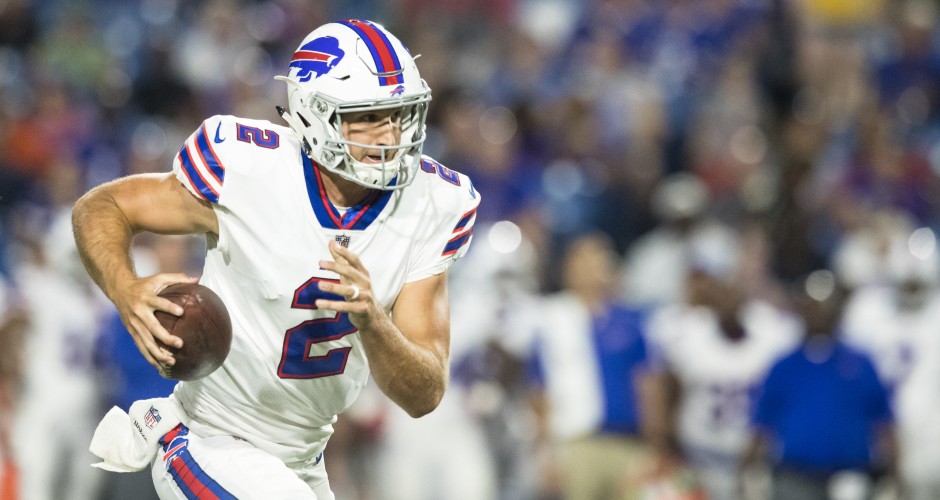 The Buffalo Bills will head to Soldier Field this Thursday, August 30th, to take on the Chicago Bears in the ever so important week four preseason matchup. Headed in to week four of the preseason typically means all of the important decisions have been made. For Buffalo, that doesn’t seem to be the case. In last week’s dress rehearsal against the Cincinnati Bengals, the Bills started rookie quarterback Josh Allen, giving him a window of opportunity to stake his claim on being the week one regular season starter. It didn’t go well. Allen’s night ended after bouncing his head off the turf in an attempt to prevent a sack and was forced to enter concussion protocol. He’d finish the game going 6/12 with a measly 34 yards. In fairness, the Bengals defense had their way with the Bills offensive line, severely limiting Allen’s ability to showcase his potential as a starter. When it was Nathan Peterman’s turn to enter, he continued to make a strong case for why he should be the week one starter. Peterman would lead Buffalo down the field for touchdowns in the first two drives of the second half and finish his night going 16/21 with 200 yards and a touchdown.

This is how the two quarterbacks stack up through the first three preseason games:

On paper, it seems clear that Peterman should be the starter. However, decisions aren’t always made based on how something looks in a box score. Sometimes decisions aren’t even made based on game film. Let’s be honest, Buffalo drooled over Allen heading in to the 2018 NFL draft and traded up to get him, letting the world know they viewed him as a franchise quarterback. While Peterman has looked poised in the preseason, we’ve also seen him in action during the regular season. It’s hard to forget a five interception game. Peterman was just a wide-eyed rookie then, so an NFL offseason has likely been a major boost to the maturation process.

On Monday, head coach Sean McDermott was asked if he had made a decision on who was going to be the week one starter and he didn’t give much insight. “No. That’s fair, I expected that. [There are] no further quarterback developments from last night at this point. We’re still coming off the game, and again, [it is] a little bit unique [having practice] the next day and not having a day off, so we’re still coming off the game and going through and processing all of that information right now”, McDermott said. Maybe Sean already has a starter in mind, maybe he doesn’t, but his response led people to question if his quarterback trio (including A.J. McCarron) would actually play in the fourth preseason game against the Bears. Once again, McDermott sidestepped. “Yeah, again, we’re still working through that. I could see why you’d say that, and I agree in some ways. At the end of the day, we’ve got to make sure we’re healthy going into this season as well, so there’s a delicate balance there”, said Sean. It’s a tough decision for the second year head coach and likely one that will be criticized regardless of the choice.  Quarterback play will certainly be a topic of discussion for both teams throughout the 2018 regular season.

Regardless of who is under center for Buffalo come this Thursday, they won’t be facing any Bears defensive starters. The starting Chicago offense won’t play either. When referencing the starters Bears Head Coach Matt Nagy said, “The focus for them right now is mentally they can finally just say I can just go all in on Green Bay, and mentally just get prepared. Soak it up, don’t worry at all about Buffalo.”