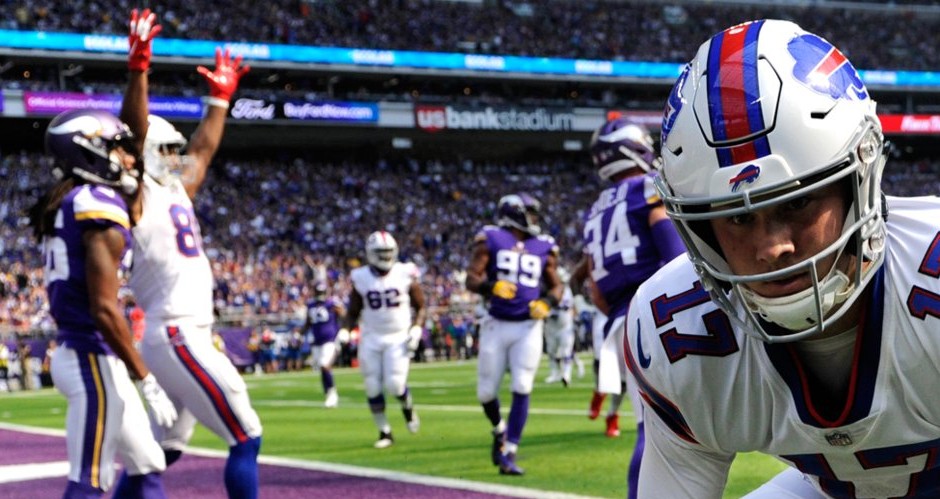 Josh Allen and the Bills defense led them to their first lead and win of the season, a 27-6 win, in a performance that turned the NFL upside down.

In what was almost a shutout against a team that many think will appear in Super Bowl LIII, the Bills defense performed big time, turning the ball over a total of three times.

Allen passed for 196 yards and tallied a touchdown, however most of the headlines will and already have highlighted his performance on the ground. He carried the ball 10 times for a total of 39 yards and two touchdowns. Both touchdowns for Allen displayed the athleticism that persuaded Sean McDermott and Brandon Beane to draft the young star coming out of Wyoming.

However, like all great quarterbacks, Allen showed humility following the win over a stunned Vikings unit. He also knows that he should probably be a bit more selective with his hurdling in the future.

The Bills defense was fired up, and they showed it by getting to the quarterback and forcing four fumbles, led by Kyle Williams and Jerry Hughes. Given their defensive play, Buffalo’s work against Minnesota’s offense deserves their fair share of credit for Allen’s success. It was a unit that was completely different from their two previous losses – undeniably different – and their difference in this game is what led to moments of silence in U.S. Bank Stadium, helping Allen and the coaches run their offense more efficiently.

This is not to say that the Bills have it all figured out, but there’s no question that this win was needed for their entire organization.

The peanut vendor must be ecstatic.

If Allen hasn’t asked anyone to pinch him yet, he will soon. Within the next five weeks, Allen and the Bills will be facing off against Aaron Rodgers, Andrew Luck and Tom Brady. Players that I assume Allen has looked up to all his life.

He did pretty well against a quarterback that for over the next three years has $84 million guaranteed. We’ll see how he fares against the rest.