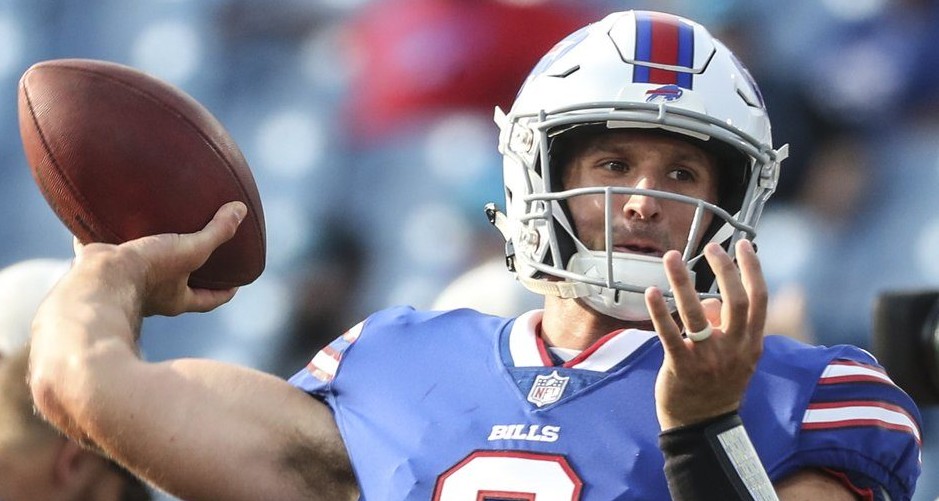 Buffalo’s Nathan Peterman looked very sharp in tonight’s preseason game versus the Carolina Panthers. Peterman got the nod to start over fellow QBs A.J. McCarron and rookie Josh Allen after a solid week of practice. While all three are contenders for the starting job, Peterman really showed he wanted it throwing for 119 yards, a touchdown, and an interception on 9/10 passing in the lone quarter that he played in.

Peterman looked like a true NFL starter showing exceptional accuracy to all parts of the field. On the Bills’ first drive, they passed the ball on seven of eight plays, with Peterman completing all of them including four to star wide-receiver Kelvin Benjamin. He capped off the drive with a 28-yard touchdown to Benjamin, after a 30-yard TD to Rod Streater was called back due to an offensive pass-interference. Throughout the drive, Peterman looked comfortable in the pocket and delivered perfect balls on six straight short passes to set up the beautifully thrown TD pass to Benjamin on a streak down the left side of the field.

Peterman came out slinging on his second and final drive with a 29-yard throw to RB Chris Ivory followed up by a 15-yarder to Marcus Murphy, but his third throw slipped through Ivory’s hands and was picked off.

Despite the interception on his stat line, Peterman did everything to show the Bills that he should be the opening day starter. He completed passes to six different players and showed good rapport with Kelvin Benjamin. Peterman got the ball off quickly and had poise in and out of the pocket. After Peterman’s performance tonight, he should get the start in the preseason week 2 matchup versus the Cleveland Browns.