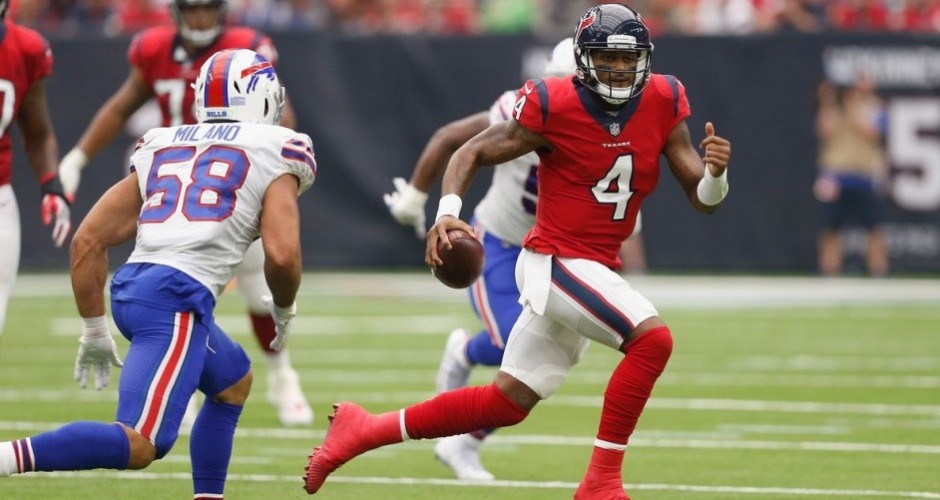 The last time the Buffalo Bills won a playoff game, quarterback Josh Allen wasn’t even born yet. Houston Texans quarterback, Deshaun Watson, was just three months old. On Saturday, the two will face off in Wild Card Weekend, looking for the first playoff win of their young NFL careers.

Since the Texans won their division, the Bills will be forced to pack up the wagon and hit the road headed for Houston. The Texans, 5-3 at home, may get to enjoy home-field advantage, but the Bills will be showing up with a confident 6-2 road record.

In 2019, the Texans offense didn’t scare anyone. They ranked 13th in total yards and 14th in scoring, but that doesn’t mean they don’t have scary weapons. Watson’s ability to use his legs makes him one of the more dangerous signal-callers in the league, and his trio of receivers is a headache for any secondary. DeAndre Hopkins remains one of the best receivers in the NFL, finishing the year with 104 receptions, for 1,165 yards and seven touchdowns.

Expect Bills corner, Tre’Davious White, to shadow Hopkins most of the day. While leading the league in interceptions (6), White didn’t give up a single touchdown in his 599 snaps in coverage – a true lockdown corner. If the Bills secondary can successfully stifle Hopkins, Watson is hoping he will be able to turn his attention to Kenny Stills and Will Fuller. Both receivers are banged up and questionable for Saturday’s game, but can be the difference in what is expected to be a close game. With Fuller in the game, Watson averages 296.8 passing yards per game. Without Fuller? A measly 158.3 yards per game.

Look for the Bills to control the game by controlling the clock. Buffalo’s defense may be elite, but the best way to keep an opposing offense out of the endzone, is to keep them off the field altogether. To do that, Bills’ offensive coordinator Brian Daboll will need to prove he’s worthy of the head coach attention he’s already receiving. The Texans defense ranks 25th in rushing yards allowed, and 29th in passing yards allowed, so opportunities are there.

Josh Allen will always attempt a few 80-yard passes downfield, but his ability to manage the game is what allowed the Bills to succeed in 2019. Using his legs, Allen gained over 500 rushing yards and scored nine touchdowns. His completion percentage may have been under 60 percent, but he also limited himself to only nine interceptions this season. With the return of defensive end, J.J. Watt, the Texans are hoping managing the game will be a little more difficult for Allen. Watt has missed the last eight games and may be on a limited snap count, but even a rusty Watt is a problem.

The Houston Texans are currently favored by three points, and kickoff is scheduled for 4:35 PM (ET) this Saturday.