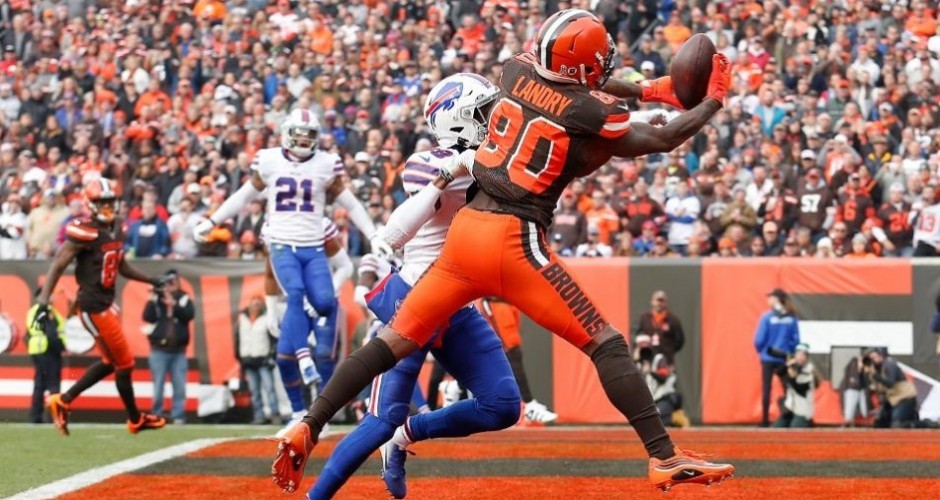 In Week 10 the Browns came out swinging, and taunting, almost as though they forgot they were 2-6 on the season. In Cleveland’s very first possession they’d go 75 yards for a score in just under three minutes when Baker Mayfield found Jarvis Landry for a 17-yard touchdown. The excitement seemed to be a little too much for Landry as he decided to have words with Bills cornerback Levi Wallace after the play, resulting in a 15-yard taunting penalty. When you only find the endzone a couple times a year, it’s easy to forget how it feels. Thanks in large part to Mr. Landry, the Browns would end up missing the 40-yard extra point – a point that would almost haunt them.

It would take more than a quarter for Buffalo to answer, but Bills quarterback, Josh Allen, would find the endzone for the first of his two rushing scores with about 10 minutes left in the second quarter, giving Buffalo a 7-6 lead.

Mayfield and company would waste little time responding, and on the following drive go 13 plays for 69 yards. Luckily for Buffalo, the possession would end with an Austin Seibert field goal. With no touchdowns being scored, Landry seemed to be able to keep his composure and would allow the kick to be much shorter this time. Seibert’s 27-yard kick would split the uprights. 9-7, Browns.

Just before half, Allen would put the Bills in scoring position, but kicker, Steven Hauschka, would fail to convert a 34-yard field goal and the score would remain the same.

If Buffalo’s offense and special teams weren’t going make a play, the Bills defense decided they would. After the Bills’ first drive of the second half stalled, punter, Corey Bojorquez, would pin the Browns on their own seven-yard line.  On Cleveland’s very first play, Mayfield would be smothered in the endzone by Tremaine Edmunds for a safety to tie the game at nine.

Austin Siebert would add another field goal late in the third quarter to give the Browns the lead, 12-9, but Josh Allen would once again find the endzone on the ground with a one-yard touchdown plunge late in the fourth quarter. 16-12, Buffaloooooo!

It wouldn’t be enough. In Cleveland’s final drive, the 2018 Baker Mayfield would arrive. The sophomore quarterback would lead his team on a 10 play, 82-yard drive for a score. In the drive, Mayfield would go 7/8 for 61 yards which included a 7-yard touchdown to Rashard Higgins with just 1:44 left in the game. 19-12, Browns.

Allen would take Buffalo 40 yards down the field with little time on the clock only to see the kicker miss his second field goal of the game. In Hauschka’s defense, it was no chip shot, and the 53-yard try would sail wide left. Bills lose, 19-16.

The Bills offense had little to no spark in Cleveland, but in hindsight, it wouldn’t have taken much to spark the engine – or in this case, the “Motor”. Running back, Devin Singletary, also known as “Motor”, had just come off a game with 140 yards from scrimmage, the most by a Bills running back in the last two years. In Week 10, he’d continue that momentum, gashing the Browns defense on more than one occasion, while averaging 5.3 yards a carry. So, in a close game why did the rookie runner only get eight total carries? Even more puzzling, why did Josh Allen throw the ball 41 times? A season-high. Hindsight is always 20/20, but these decisions will do anything but quiet the critics for offensive coordinator, Brian Daboll.

For Cleveland, it was the type of win that could pull them from the depths of despair, while also leaving the Bills to take their place. For Buffalo, next week’s game against the Dolphins – who are suddenly on a winning streak – will tell us everything we need to know moving forward.