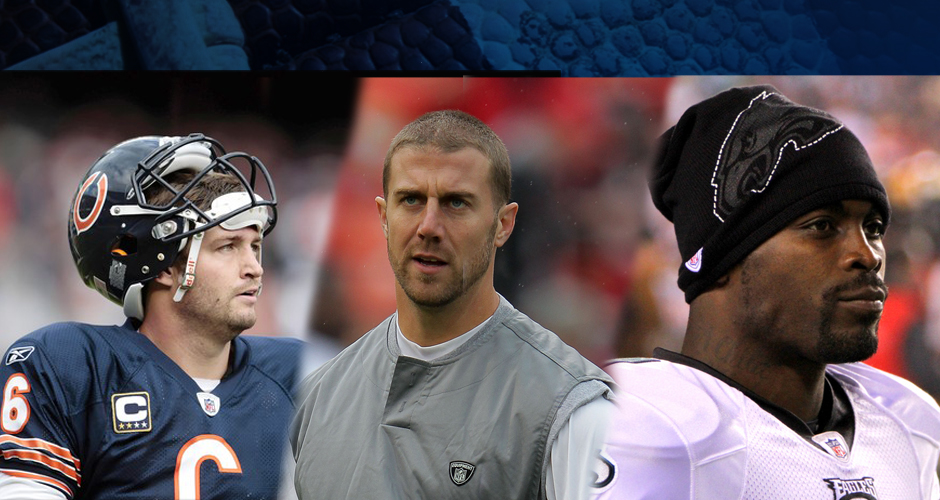 Concussions took center stage once in the NFL again this weekend.  Michael Vick, Alex Smith and Jay Cutler all finished their games Sunday on the sidelines as all three suffered concussions.  How the teams managed them reveals that progress in the handling of concussions continues to move at a glacial pace.

Bears quarterback Jay Cutler took a hard helmet-to-helmet hit from Texans’ linebacker Tim Dobbins but he stayed in the game.  He got hit in the head again on the following play, but continued to stay in the game for another six plays after that.  Ultimately, he sat out the entire second half with a concussion, one of six concussions he has reportedly suffered throughout his career.

“Didn’t have any symptoms, no,” Bears coach Lovie Smith said. “There were a lot of hard hits out there today.  You can’t start taking guys out for that.  When they’re injured, then we take them out.”

Eagles quarterback Michael Vick was driven into the ground head first by Cowboys’ tackle Jay Ratliff.  He stayed in the game, and on the following play he was knocked on his back by Ernie Simms and was slow to get up.  At that point, he was taken out of the game, but the injury may very well have occurred on the first play, not the second.

“I was hoping he’d make it through without having a concussion, but that’s where we sit right now with him,” Eagles coach Andy Reid said.

49ers quarterback Alex Smith took a hard hit to the back of his head and neck from Rams linebacker Jo-Lonn Dunbar while scrambling, but he also stayed in the game.  He completed his next five passes, including a touchdown to Michael Crabtree, but he was also sacked three plays later and then hit hard again on a fourth-and-one quarterback keeper before leaving the game.  It wasn’t clear when the injury actually occurred, although 49ers coach Jim Harbaugh said, “From what I’ve been told by the doctors and the trainers it seems like it was the quarterback sneak [the last play in which Smith was in the game].”

Harbaugh went on to add, “[Smith] said his vision was blurred before going back in on the series that we didn’t put him in. So, said he had blurred vision. So called up [QB Colin Kaepernick] Kap. Got him warmed up and Alex went over and saw the doctors.”

Asked about Smith’s status for next week, Harbaugh replied, “He has a concussion. That’s been determined.”  He then added, “There’ll be a protocol, a progression that he’ll go through.”

Football players are tough and accustomed to playing through pain and injuries, but concussions are different and need to be handled differently.  First of all, players who have suffered a concussion may want to stay in the game, but their judgment can be impaired.  They need their coaches, teammates and sports medicine staff to be looking out for them.

To be fair, concussions can be hard to diagnose.  Dr. John Sullivan, a clinical sports psychologist who has worked in the NFL for over 12 years, emphasizes that there is still much more that needs to be done by the NFL.

“Some people think that unless a player passes out, they don’t have a concussion,” Dr. Sullivan said.  “The vast majority of concussions do not involve a loss of consciousness.  Many concussions don’t exhibit any obvious physical symptoms, but the injured player may have impaired balance, impaired decision making, and be more susceptible to an additional, more serious injury.”

The repercussions can even be life threatening in certain cases.  “Second Impact Syndrome (SIS) is an example of how critical proper concussion management is,” Dr. Sullivan explained.  “SIS involves an athlete who has been concussed and returned to play too early and then suffers another concussion, triggering a chain of reactions in the body including diffuse cerebral swelling and possible death.  SIS is rare, but the implications could not be more serious.”

So while concussions are difficult to diagnose, they can be potentially life threatening and even in less severe cases, the symptoms can be very serious and surface years later.  There are now over 2,000 former NFL players who have joined a class action suit against the NFL for its handling of concussions and for symptoms they continue to suffer years after leaving the game.

The NFL took some steps last season following a pair of incidents that highlighted the extent of the problem – one involving former Charger Kris Dielman and another involving Browns quarterback Colt McCoy.  The league has added an “observer” to the booth for all NFL games to watch for players showing signs of a head injury, to help identify potential concussions to be checked by the sports medicine staff on the sidelines.

But it still isn’t enough.  Look at this past weekend’s incidents.  Reid kept Vick in the game, and even made the statement that “I was hoping he’d make it through.”  Did this indicate that Reid was concerned about a potential concussion but hoped that Vick could finish the game?

Lovie Smith said of Cutler, “You can’t start taking guys out for that.  When they’re injured, then we take them out.”  The sad truth is that a concussed player could be injured without showing obvious signs, and fellow players and coaches need to help evaluate players during the game, getting them to the sidelines for a full evaluation if there is any concern regarding a concussion.

Ultimately, the NFL needs a more complete program, including education and more detailed screening and assessments, both during games and from week to week.  There needs to be a better process for identifying concussions and evaluating players for testing before they absorb multiple hits after already suffering a head injury.

“We’re also fighting the stigma of mental health,” Sullivan went on.  “The idea that a broken leg is an acceptable reason to leave the field but a brain injury is not.  We need to view the player as a complete person, not just focus on if they can still run and tackle.”

Increased focus on concussions helps, but we still need to do a better job of education, assessment and screening for return to play decisions.