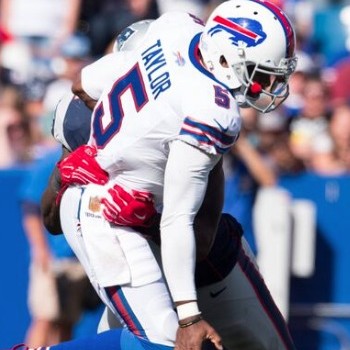 The Buffalo Bills took their first possession 80-yards in five minutes to take an early 7-0 lead over the New England Patriots.

Tom Brady proceeded by taking the air out of the stadium, and deflated the hope of Bills fans by marching the Patriots 62-yards in a no-huddle drive in just over two minutes for a touchdown.

“When he is moving with that fast tempo it does hurt us, but you got to put your hand in the ground and go play football,” Jerry Hughes said following the game.

Following their successful opening drive, the Bills next five possessions went as follows:

In that stretch, the Patriots racked up an unanswered 21 points, taking a 21-7 lead early in the second quarter.  As soon as the Patriots switched to a no-huddle offense, the Bills pass rush was non-existent and their secondary was constantly confused.

The Patriots never looked back from there 21-7 lead and it’s safe to say no world record was set at Ralph Wilson Stadium for crowd noise on this day.

“We did a horse**** job,” Rex told members of the media.  When asked if Belichick out-coached him Rex replied “All I know is his team won, again.”

The Bills repeatedly shot themselves in the foot, racking up 12 penalties for 108 yards throughout the game.  Many of which were unforced mental errors, such as unnecessary roughness and taunting, summarizing a general lack of composure the Bills played with.

“We need to be smarter.  We dug ourselves a hole and did our best to get out” defensive end Mario Williams said.

When asked if he was taking the loss personally, Rex responded in an animated fashion.  “Hell yeah I’m taking it personal.  I’m gonna take the rest of them personal too.”

Without any huge game-breaking plays, the Patriots picked Ryan’s defense a part, quick pass after quick pass.  Brady ended up 38-of-59, with 466-yards and 3 touchdowns.  The 466 passing yards by Brady was the most ever allowed by a Buffalo Bills defense in their history.  Rob Gronkowski hauled in 7 catches for 113 yards with a score.  Julian Edelman chipped in with 11 catches for 97-yards and two touchdowns.

The Patriots kept the Bills on their heels all day with missed assignments and a lack of communication.  According to Nigel Bradham, the Bills knew what was coming and still couldn’t stop it.  “He’s been doing the same thing for years…he just gets the ball out quick, that’s all he wants to do” Bradham said.  “They knew they couldn’t run the ball,” Bradham continued.

Bradham wasn’t lying.  Brady threw the ball 59 times, and the Patriots ran the ball just 15 times.  That’s a 4:1 ratio and yet the Bills couldn’t stop New England’s unbalanced attack, even if they knew what was coming.

“They just play a simple game and they try to get you with matchups and quickness,” Bradham said.  “We knew what they were gonna do in every situation…we just had those penalties and gave up those quick 21 points,” Bradham concluded.

When asked about Dion Lewis, Bradham said “He ain’t no Shady McCoy.”

While that is a very true statement, Lewis, the guy who Rex Ryan publicly joked about not knowing his name, torched Bradham and the Bills.  Lewis had 6 catches for 98-yards and chipped in 7 rushes for 40-yards.  Most of the game a linebacker lined up against the quick and shifty Lewis, and Brady took advantage of that matchup.

When asked if Ryan’s comments regarding him throughout the week motivated him, Lewis replied “No.  Winning motivates me.  Being there for my teammates and trying to help my team go 2-0.  That’s what motivates me.”

On the other side of the fence, Tyrod Taylor no longer looks perfect.  Taylor went 23-of-30 throwing for 242-yards and 3 touchdowns, with three interceptions.  Taylor also had a rushing touchdown.

It wasn’t a complete blowout, as Brady and the Patriots decided to throw the ball late, which enabled the Bills to mount somewhat of a comeback.

Even though the Bills kept shrinking their lead, New England continued to throw.

On second down, Brady dropped back to pass and was sacked by Jerry Hughes who also forced a fumble on the play.  The Bills recovered, and went 5o-yards in fifteen seconds, which was capped off with a 24-yard touchdown from Taylor to Sammy Watkins.

The Watkins touchdown made the score 37-32.

Buffalo held New England to a field goal on their following possession and gave the ball back to their offense with 1:15 remaining in the game.  Subsequently, Taylor was intercepted on their first play and the game was over.

For Belichick and the Patriots, winning against Buffalo has become a habit as Brady improved to a 24-3 all-time record against the Bills on Sunday.  The Patriots once again sit atop of the AFC East, improving to 2-0 on the young season.

For Rex and the Bills, this will be a tough one to swallow, given the anticipation that went into this game.  Starting safety Aaron Williams left the game in the third quarter from an ambulance and was sent directly to the hospital with what appeared to be a very serious neck injury.  He has since left the hospital after undergoing a series of tests and could potentially be out for a very long time.

However, there are some positive takeaways from their defeat today.  It’s only week two. While they didn’t perform how they wanted to, the Bills didn’t say ‘never.’  They showed resiliency as they came back from what was once a 24-point lead and gave themselves an opportunity to win the game late.  However, it was too late.

More often than not a team will not be on a winning side of the game after committing 14 penalties and three turnovers.  These mental mistakes are fixable, however the lack of discipline and communication ended up costing them this game.

As of now, the Guinness book of world records hasn’t been updated, but it’s probably safe to assume no world records were set at Ralph Wilson Stadium for crowd noise on this day.