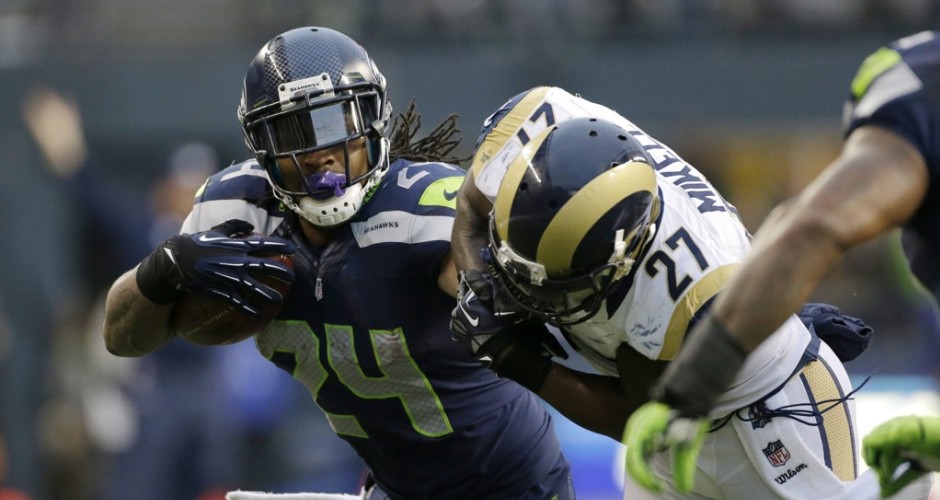 Marshawn Lynch once told Sports Illustrated  “I don’t want people to see another side of me…I don’t want to ruin my image.”  The image he’s referring to is Beast Mode.  If you are unfamiliar with Beast Mode, please enjoy what has now become one of the most popular runs in NFL Playoff history below:

Maybe his S.I. quote can explain his lack of motivation to speak with NFL reporters during Super Bowl week, which sent shockwaves around the social media sphere.  Lynch has had his share of ups and downs through out his NFL career.

After finding success as a California Golden Bear running back, Lynch was selected 14th overall in the 2007 NFL Draft by the Buffalo Bills.  As a rookie Lynch rushed for over a thousand yards, improving a 2006 rushing attack which ranked 27th in the NFL (the Bills ranked 15th in the 2007 season).

Beast Mode stuck around Buffalo until the 2010-11 season, when he was traded to Seattle for a 2011 4th-round draft pick due to his continued run-ins with the law and an overcrowded backfield (C.J. Spiller and Fred Jackson still call Buffalo home).

Lynch hasn’t been held in the highest regard by the NFL media, making it hard to imagine the 5′ 11″, 215 lb. steam engine running back having a soft side.

Who knew Beast Mode’s soft side is as sweet as Skittles?

After winning Super Bowl XLVIII in February, July will play host to Lynch’s 8th annual free football camp through his foundation FAM 1st Family.  Lynch is the vice-president of the foundation, while the organization’s founder and president is Lynch’s cousin (and fellow NFL player) Josh Johnson.  The free football camp is just one of a handful annual events they set up and sponsor during the Summer months.

From the FAM 1st Foundation’s website, fam1stfamilyfoundation.org, the organization was founded to “improve the lives of children by mentoring them on the importance of education, literacy and self-esteem.” What you may not realize about the man they call Beast Mode is his capacity to give back to his community.

“The football camp was something for us to touch the youth and we understand that the youth is the most important part but we wanted to get parents involved as well so we started making events where they could come out and enjoy the festivities as well,” Lynch said in an interview with Yahoo! Sports Talk Live.

Monday June 23rd is “The Big Golf Game,” which is a charity golf tournament ran by the FAM 1st Foundation and will feature Lynch and Johnson in person.

With cash prizes for the top three contestants, the FAM 1st Foundation is hosting a talent show on July 10th because “…it is our responsibility to help our youth see the special talents they have within them and help them to dig deep and be both creative and outgoing,” from fam1stfamilyfoundation.org.

For a complete listing of all of the charity events please visit the foundation’s website.