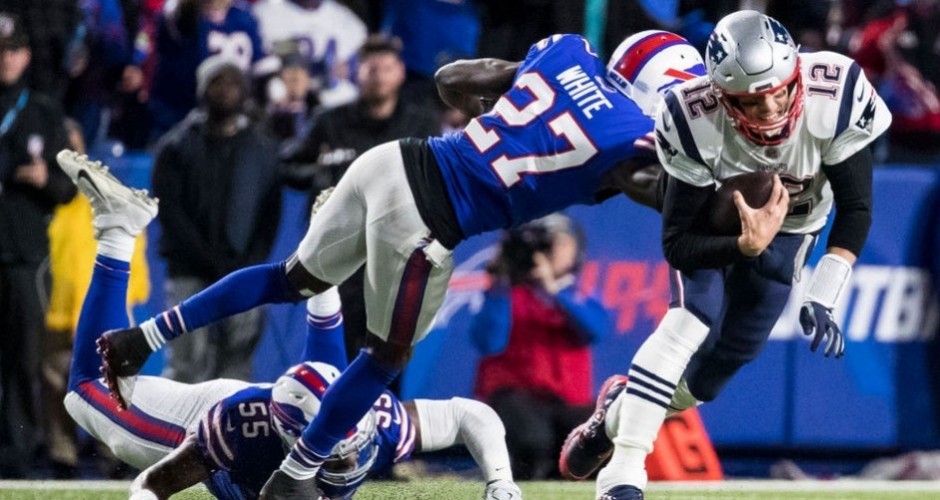 When you turn on the television this Sunday morning, you likely won’t see many, if any, people picking the Buffalo Bills to beat the New England Patriots. It’s not surprising, the Patriots are the defending Super Bowl Champions and they’ve embarrassed every team they’ve played the first three weeks of the 2019 season. In fact, even without Rob Gronkowski, Tom Brady and the Patriots appear to be playing the best football in franchise history – and they once went 16-0! So, the Bills don’t stand a chance, right? Wrong. Here’s how, and why, little brother will upset big brother in Buffalo this weekend.

The Bills Mafia will be loud this Sunday. Maybe louder than they’ve ever been. Buffalo is only 5-4 at home dating back to the beginning of last season, but the Patriots are 4-5 on the road in that same stretch. Last year, two of those three road wins were against backup quarterbacks, Derek Andersen (BUF) and Josh McCown (NYJ). Their one win on the road this year was against the Miami Dolphins, a team that looks like they may not win a single game this season. We’ve heard all week about how the Bills first three victories have come against opponents who are a combined 1-8 to start the season. As for Patriots opponents? 0-9.

Josh Allen Will Control the Clock

Patriots head coach, Bill Belichick, is notorious for confusing opposing team’s offensive coordinators and their signal-callers, but it’s a bit too early in the season for him to be too confusing. He’ll look to make Bills quarterback, Josh Allen, prove he is in fact a quarterback. Unfortunately for Belichick, Allen will be ready. As a rookie last season, Allen completed 52.8% of his passes with a rating of 67.9. This year he’s started off the season completing 64.1% of his throws with a rating of 83.4. He’s improved in large part to offseason additions John Brown and Cole Beasley. Brown can take the top off the defense on any play, and Beasley goes about his game like the ever-reliable Patriot, Julian Edelman. Allen won’t be looking to rush for 100+ yards, but to keep Mr. Brady off the field, look for Allen to extend drives with short runs resulting in first downs.

Who?! Unless you’re a member of the Bills Mafia or a fantasy football guru, the name Dawson Knox might not be familiar to you. The rookie tight end known as “Rambo”, introduced himself to the world last week when he punished two Cincinnati Bengals in a reception that would eventually set up Buffalo’s game-winning score. Rambo only has five receptions for 86 yards and a touchdown on the year, but last week’s performance will certainly get him more looks moving forward. As they say, a tight end can become a quarterback’s best friend.

The Bills Defense will be the Better Defense

Through three games the New England Patriots have the best defense in the NFL, and it’s not close. They lead the NFL in passing yards given up (199 yds/g), rushing yards given up (36.7 yds/g), and points against (5.7 pts/g). But on Sunday, it will be the Bills defense that rises to the occasion. Buffalo heads into week four with a top five defense, only their defense has been in the top five for more than a year – not just for three weeks against 0-9 opponents. Defensive back, Tre’Davious White, has taken some criticism early in the year, but last week he hauled in two interceptions, one of which was the game-clincher, and will arrive at New Era Field on Sunday with some much-needed confidence when he faces off against Patriots receiver, Josh Gordon. With the home crowd backing them, Buffalo will be bringing the “hit stick” on Sunday afternoon. Edelman and Brady (allegedly) are banged up, and like sharks in the water, the Bills smell blood. Look for Buffalo to hit number 11 and 12 early and often.

New England is currently sitting as seven-point favorites (-7). Brady is 30-3 against Buffalo all-time. The bulletin board material is endless. Bills players turn on their televisions and have seen things like this all week:

Make no mistake, this is a big game, but at the end of the day it’s only week four. Win, lose, or draw, there will still be a lot of football that needs to be played. In other words, the only thing the Bills have to lose, is this game. When you have nothing to lose, you have the courage to risk it all – and Buffalo will do just that.