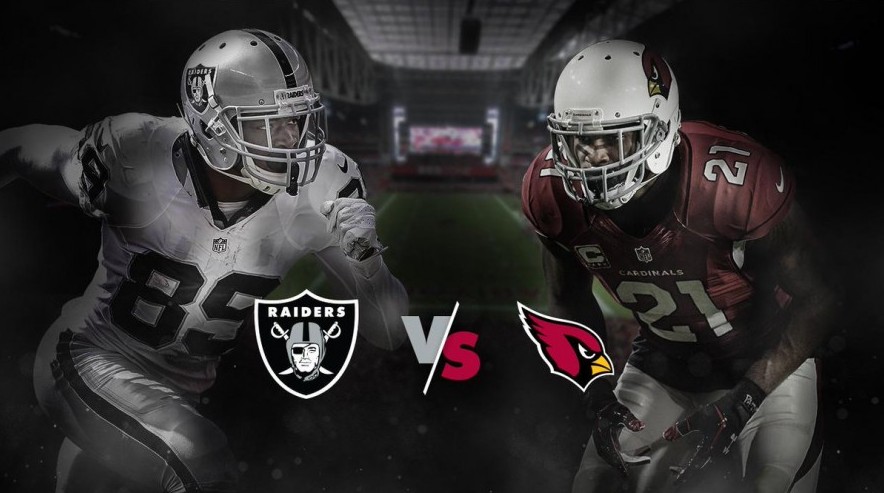 After a promising flight in the Hall of Fame game against the Dallas Cowboys, the Arizona Cardinals will soar home to take on the Oakland Raiders for the official week one of preseason football.  If just for a moment, this game will feature two of the league’s highest paid players in Derek Carr and Carson Palmer, ranked first and third respectively in annual salary.

With Arizona starters only expected to see about 15 snaps, Carson and company will look to start off as hot The Gabbert Group did last week, where Mr. Gabbert’s executive decisions led to completions on his first eight pass attempts, and touchdowns on his first two drives.  Mr. Palmer however, will start off his preseason debut with a briefcase of resources that Gabbert has yet to be showcased with.  Most notable among these resources is future Hall of Famer, Larry Fitzgerald. Coming off a year where he led the NFL in receptions (109), number 11 shows no signs of taking his foot off the gas. Why would he? The last stop of the season, Super Bowl LII (52), ends in Minneapolis, Minnesota, where Larry was born and raised.  The setting for riding off into the sunset, couldn’t be foreshadowed any more perfectly.

Among Carson & Co.’s team of executives starting against the Raiders will be the COO (Center Of Offense), David Johnson. Not only did DJ rush for 1,239 yards and 16 touchdowns in 2016, Pro Football Focus (PFF) ranked him the NFL’s most efficient receiver. Yes, you read that correctly.  Not Julio Jones.  Not Odell Beckham Jr.  Not even Antonio Brown.  With 80 receptions for 879 yards and four touchdowns, Johnson was just 121 yards short of 1,000 yards receiving.  Heading in to his third season, David hopes to join the likes of Roger Craig and Marshall Faulk as the only players in NFL history to join the 1,000/1,000 club.

Trying to keep the executives’ safe will the Red Bird’s team of security, the offensive line.  Last season, injuries throughout the offensive line resulted in far too many security breaches by opposing defenses.  Regardless of how many stars a team may consist of, they are nothing without protection.  This year the Cardinals have swapped the tackles, opting to start D.J. Humphries at left tackle and Jared Veldheer at right.  He may have played only 3 games at left tackle last season, but Humphries gave up no sacks from the left side and was actually more efficient than he was on the right.

Keeping the Raiders at bay will be up to Arizona’s starting defense, anchored by defensive end Chandler Jones and cornerback Patrick Peterson.  A few starters may have left the nest, but expectations from 2016, where the Cardinals ranked second overall in total yards given up (4,883), will carry over in to the new season.  Joining Chandler will be a healthy, and extremely confident, Tyrann Mathieu.  “Any time I’m healthy I feel like I’m the best defensive player in the NFL”, Mathieu recently told reporters.  Coming off a 12.5 sack season, rising superstar Markus Golden will look to force Raiders head coach Jack Del Rio to reconsider just how long he plans on leaving quarterback Derek Carr in the game (should Carr even play).

History tells us that a raider is a warrior that invades an enemy’s territory, but the Raiders of the Bay may not have to leave home when the playoffs roll around.  Oakland had a league-high seven Pro Bowl selections in 2016, all of whom are returning for the 2017-18 season, making them one of the favorites to contend for the AFC Championship.

Pro Bowlers joining Carr on the offensive side of the ball will be Amari Cooper (WR), Rodney Hudson (C), Kelechi Osemele (G), and Donald Penn (T).  Penn is currently holding out due to a contract dispute.  Even should the two sides comes to a resolution this week, Donald would still likely sit out the Raiders first preseason game.  Not having your starting left tackle may be even more of a reason to let Carr relax on the sidelines.  The silver and black have added a new mode this year; BEAST MODE! Marshawn Lynch will be returning to the gridiron after a year away from football and while it is unclear how the 31-year-old running back will produce, he is no stranger to Pro Bowls himself.  He’ll look to give the Raiders, and his hometown city of Oakland, that added spark to get them back to the Super Bowl.  The Pro Bowlers on the defensive side of the ball attacking the Arizona offense will be defensive end, Khalil Mack, and safety Reggie Nelson.  Mack needs no introduction and will be a candidate for Defensive Player of the Year not just this year, but for many years to come.  With five interceptions and two fumbles recoveries in 2016, Nelson is the type of playmaker who can slash an opposing offense’s time of possession in half.  Should the Raiders elect to play their starting defense, the Bird Gang will certainly have their hands full.

After their 2016 seasons ended in disappointment, the Cardinals and Raiders will once again try to get the momentum rolling before the regular season begins.  Kickoff is set for this Saturday, August 12, 2017 at 7pm (PT).