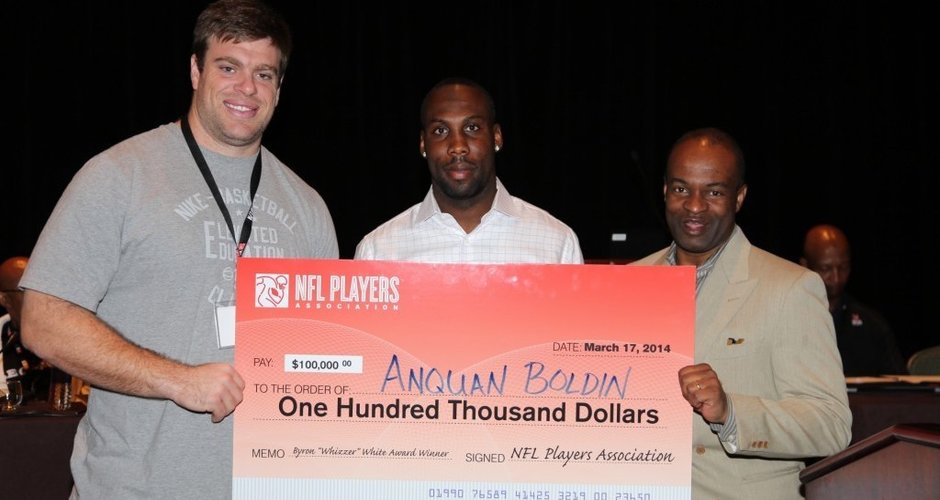 WINNER TO BE ANNOUNCED AT NFL HONORS BEFORE SUPER BOWL XLIX

Three NFL players will be recognized for their community leadership during Super Bowl week as finalists for the Walter Payton NFL Man of the Year Award, Presented by Nationwide, it was announced today. ANQUAN BOLDIN of the San Francisco 49ers, THOMAS DAVIS of the Carolina Panthers and AARON RODGERS of the Green Bay Packers are the top candidates for this year’s award, named for the legendary Bears running back who died in 1999.

As announced in July, Nationwide is the presenting sponsor of the award for the first time this year. The Walter Payton NFL Man of the Year Award is the only league award that recognizes a player’s off-the-field community service as well as his playing excellence.

The winner will be announced in Arizona, the site of Super Bowl XLIX, during the fourth annual NFL Honors, a two-hour primetime awards special to air nationally on Saturday, January 31, from 9-11 p.m. ET/PT on NBC.

The finalists were chosen from among the 32 team nominees for the award, all of whom receive a $5,000 donation from the NFL Foundation and Nationwide to the charity of their choice. The selection panel is comprised of NFL Commissioner ROGER GOODELL, former NFL Commissioner PAUL TAGLIABUE, CONNIE PAYTON, Pro Football Hall of Fame members FRANK GIFFORD and ANTHONY MUÑOZ, 2013 winner CHARLES TILLMAN, and Sports Illustrated football writer PETER KING.

He became the fourth player in franchise history to register multiple seasons with 1,000-or-more receiving yards and is the first to do so in each of his first two seasons with the team. With another successful season under his belt, Boldin is now one of two players in NFL history to record at least 600 receiving yards in each of his first 12 seasons, joining Hall-of-Fame wide receiver Jerry Rice.

While Boldin has amassed an impressive on-field record, he has never lost sight of the importance of giving back to the community. The Anquan Boldin Foundation was formed in 2004 by Boldin with a mission to expand the educational and life opportunities of underprivileged youth. In December 2014, he and his wife, Dionne, announced a $1 million pledge to increase the impact of their Foundation.

The Foundation offers programs throughout the year, including a summer enrichment program, Thanksgiving food drives offering 300 meals annually and holiday shopping sprees. In the fall of 2014, the Foundation awarded $10,000 academic scholarship to four students entering college and, since its inception, has awarded eleven four-year scholarships through the “Q81” Foundation Scholarship Fund.

With an international philanthropic reach, Boldin has also been involved with Oxfam America since 2010, travelling to Ethiopia and Senegal. Following his second trip to Africa, Boldin addressed political concerns in Senegal involving creating more transparency in the gold mining industry, testifying as an Oxfam Ambassador before the House Committee on Foreign Affairs, Subcommittee on Africa, Global Health and Human Rights on the issue.

THOMAS DAVIS (Carolina Panthers)
2014 was another strong season for linebacker Davis, who started in all15 games he played and finished with his third consecutive 100-tackle season. Davis, a four-year team captain, totaled 129 tackles, 2.5 sacks, two forced fumbles, one fumble recovery and six passes defended. He was a key component of the Panthers 10th-ranked defense, helping the team become the first franchise to claim consecutive NFC South titles. Davis ranks second on the Panthers all-time tackles list with 831.

Off the field, Davis puts his shoulder in to as many charities as he does opposing team ball carriers. In 2007, he and his wife Kelly founded the Thomas Davis Defending Dreams Foundation (TDDDF), a non-profit dedicated to providing and promoting free programs that enhance the quality of life for more than 2,000 underprivileged children and their families annually. Since its inception, the foundation has distributed more than $500,000 in aid. The foundation’s cornerstone program, the Youth Leadership Academy, is a 14-week afterschool mentoring program for low-income middle school students.

Davis annually provides two college scholarships for graduating high school seniors who have completed the Youth Leadership Academy program. Through TDDDF, Davis also hosts annual programs including a back-to-school supply giveaway, a Thanksgiving meal for members of a local women’s shelter and a Christmas gift giveaway for underprivileged children, in Charlotte, N.C., parts of South Carolina and in Davis’ hometown in Georgia.

Davis is an avid proponent of keeping youth active and healthy. In June 2013, he led the construction of the first and only playground in his rural hometown of Shellman, Ga. In addition, his annual free football camp provides more than 350 children with instruction in football basics and life skills. Davis is active in the Panthers’ PLAY 60 efforts and is a frequent visitor at the local pediatric hospital.

In April 2014, Davis received the Call to Courage Award, given annually to a Christian athlete who displays exemplary character through both adversity and triumph. Davis is a four-time Walter Payton Man of the Year nominee, and was a finalist in 2013 – the team’s first.

AARON RODGERS (Green Bay Packers)
The NFL’s all-time leader in career passer rating (106.0), Rodgers led the Packers to their franchise-record fourth consecutive NFC North title and their team-record-tying sixth straight playoff appearance. He ranked No. 1 in the NFL this season in TD/INT ratio (7.60, 38/5), No. 2 in passer rating (112.2) and yards per attempt (8.43), and No. 3 in TD passes (38), the only quarterback in the league to finish in the top three in all four of those categories. Rodgers posted eight games with three-plus TDs/zero INTs, tying Patriots QB Tom Brady (2007) for the most in a season in NFL history.

Rodgers has committed his time and passion to numerous charitable organizations, including several causes that directly impact the life of children such as the MACC Fund (Midwest Athletes Against Childhood Cancer), www.itsaaron.com and Make-A-Wish. Through his work with the MACC Fund, he has helped raise awareness and support for children with cancer and blood disorders. He recently eclipsed the $1.5 million mark in total monies raised through his own personal efforts, campaigns and events.

Rodgers co-created www.itsaaron.com to help raise awareness and build support for organizations and individuals making a difference in their communities, including those that help children with cancer and those who have faced physical disabilities or poverty.

“I have always felt that it is a responsibility to use your platform to make a difference in people’s lives, and as professional athletes we have the opportunity to have a very wide reach in making an impact with the platform we have been given,” Rodgers said. “I have been fortunate enough to work with some amazing organizations that are doing some incredible work. I realize that my involvement can give those organizations a little help, but the work that they do stands alone, and I am just happy to stand next to them.”