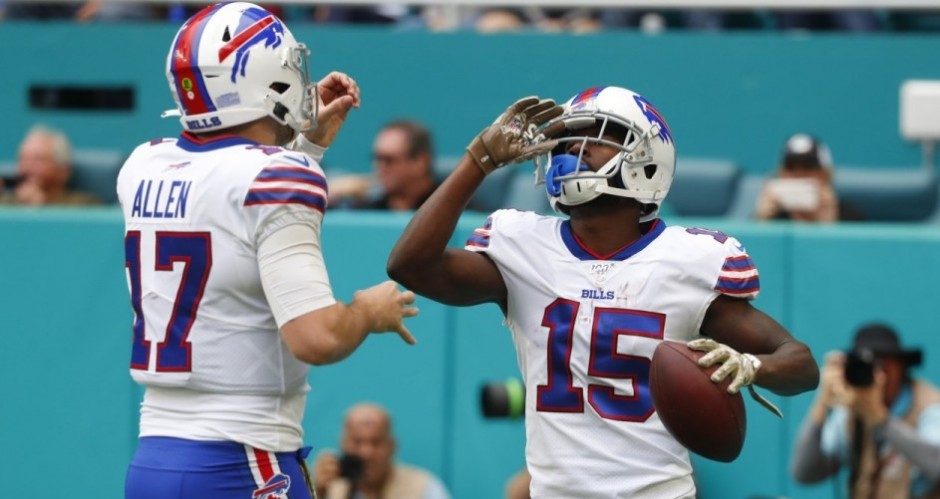 Josh Allen looked good. Real good. The Bills second-year quarterback was poised in the pocket on the way to a 37-20 route of the Miami Dolphins in Week 11. Allen would finish the day with 256 yards through the air, and a career-high three touchdown passes – two of which would be to John Brown.

The receiver dubbed “Smoke” by former head coach, Bruce Arians, has had his ups and downs in the NFL, but seems to have found his home in Western New York. Last week Brown became the first Bill in franchise history to record at least four receptions and 50 yards in nine straight games, surpassing the legendary Andre Reed. This week the speedy receiver would extend that streak, hauling in nine receptions for 137 yards and two scores. With numbers like that, it’s safe to say Brown won’t be paying for hot wings anytime soon!

The only person that may like Brown more than the Bills Mafia, is his own quarterback. “He [Brown] goes and attacks. He is an all-time teammate, a guy that nobody can say anything bad about,” Allen said while addressing the media after the game. “Just a guy that goes in and works and wants to get better. He doesn’t care about stats, doesn’t care about scoring touchdowns. He cares about winning, and when you have a recipe like that you’re destined for success.”

Buffalo’s defense would also rise to the occasion – more specifically, the Bills rush defense. While elite, Buffalo’s “D” has taken heat as of late when it comes to stopping the run. That wouldn’t be the case this past Sunday in Miami Gardens. The Dolphins leading rusher, Kalen Ballage, would finish the game with nine yards rushing – on nine carries! The Dolphins as a unit would finish the game with just 23 rush yards.

If Allen can continue to play turnover-free football, while the defense stops the run, the Bills have just as good of a shot as the next team when it comes to making a playoff push. Buffalo will head back home to New Era Field where they’ll take on the Denver Broncos in Week 12.