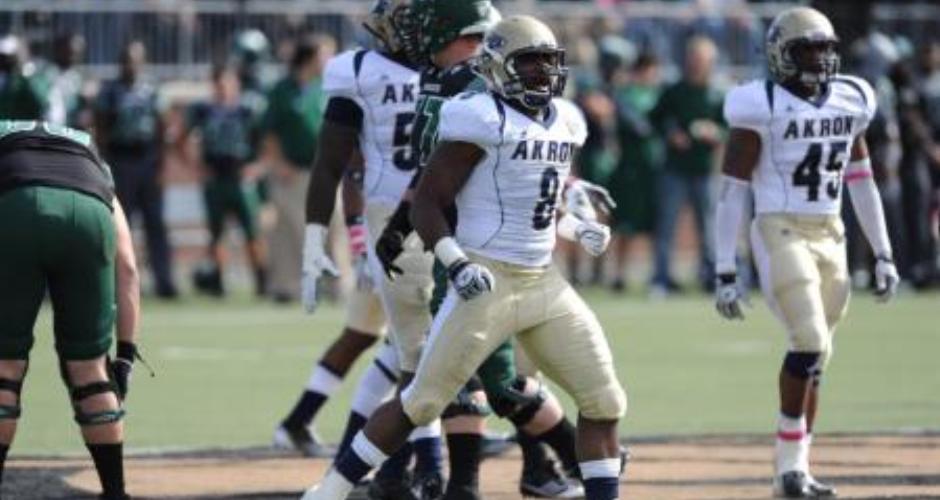 One player who NFL teams should take a look at is Akron Zips linebacker Kurt Mangum. A 6’0” 234 pound transfer in the summer of 2012, Mangum led the Zips with 110 tackles, including 48 solo stops, in 2012. He also tallied five tackles-for-loss, one sack, one forced fumble, one fumble recovery and one interception as a starter in all 12 games. Those numbers helped earn him the team’s Defensive MVP Award and a Captain’s Award.  Melissa Mahler caught up with him when he was in Los Angeles for the NFLPA Bowl and learned his interesting story.

“With God’s grace you just take destiny with your own hands and make decisions that will help you get in position to get ready to perform and show what you have.” ~Kurt Mangum

In his Pro Day workouts, Mangum sustained a hamstring injury which prevented him from running his 40-yard dash. Reports list his 40-time of in the 4.54 range and his high school times support these claims. With a vertical that can surpass the 30’’ mark.

Though Mangum did not capture any of the national spotlight, he has the tools to stack up against some of the top linebackers in the nation and his athletic pedigree includes his great uncle Bears Hall-of-Fame running back Gale Sayers.

As we head into the NFL draft this week, Mangum projects to be a day three or undrafted free-agent.  That said, all signs read that he has the determination and ability  to play at the professional level. Now, he just needs the chance to prove it.

Q: Can you tell us a little about your story on how you got to the NFLPA Collegiate Bowl?

A: “Well actually I played in the Casino Del Sol game the Saturday before and I was basically trying to figure out, well man I really want to play in the NFLPA game. I really want to play in this game here. The Home Depot Center is a great venue, great coaches. I found out who was coaching and I said my cousin Toby Wright was an all pro for the St. Louis Rams and he played for Coach Dick [Vermeil] and basically I knew I wanted to get out here. So we said you know what ,it’s Tuesday and I was waiting to hear back and see if I was going to get an opportunity to play in the game so we just drove down to see if somebody goes down or as an alternate see if I can get into the game. So I had my stuff in the car and we kind of pulled up and someone actually went down and they called my number and I was ready to go so I practiced the next day. And that’s all she wrote.”

Q: I was told you might have to wait a bit to get your gear before you could practice but you were already ready.

A: Absolutely I mean I was ready to practice and they were warming up when they gave me the go ahead so I was putting my stuff on and they said wait you got to sign some waivers and get some stuff filled out before you can get on the field so it kind of postponed me a day.

Q: You really were great in practice despite [being delayed] has anyone else commented on your story? It just shows great determination.

A: Well a lot of people don’t know the story because it’s one of those things where people just see where you end up and once you’re here you’re just another “one of the guys” so people don’t know how it ends up or the way it ends up.  I just kind of think sometimes you have to take your destiny and obviously with God’s grace you just take destiny with your own hands and make decisions that will help you get in position to get ready to perform and show what you have.

Zach Younker Contributed to this story