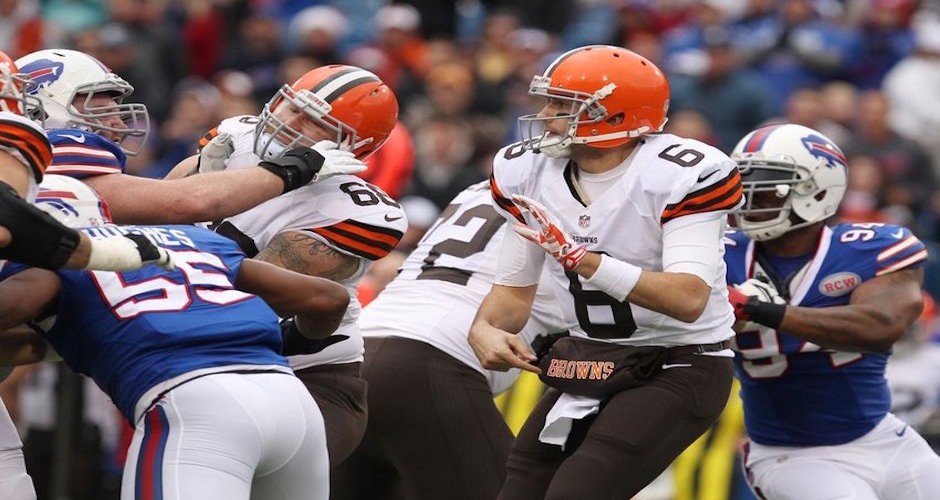 While Buffalo only had two sacks against Cleveland to bring it’s league-high mark to 48, and the two came from Kyle Williams and Nigel Bradham, the bookend duo of Jerry Hughes and Mario Williams is a huge advantage that helps out the entire defense, even against a great Browns offensive line that had previously only allowed 18 sacks on the season.

Joe Thomas' worst PFF grade entering this week was a -0.1. Against Jerry Hughes, he was given a -2.7. #PayHughes #BillsMafia

Now the Bills go to Denver to face off against Peyton Manning and the fifth-highest scoring offense in the NFL (30.1 points per game), and a front five that has allowed the fewest sacks in the NFL (13). What those stats don’t show is that the Broncos offensive line has been in flux all season, as they have had three different right tackles (Chris Clark, Paul Cornick, and now Louis Vasquez), and that teams that have been able to get consistent pressure (Seattle, New England, and St. Louis) were able to frustrate Manning throughout their match-ups.

The trio of talented pass rushers in Mario Williams (12 sacks), Marcell Dareus (10 sacks), and Hughes (9.5 sacks) need to be able to force Manning out of his comfort zone in the pocket and potentially make multiple plays like the one Justin Houston made for Kansas City on Sunday, when he stripped sacked Manning. Even with a banner defensive performance, Kyle Orton will have to be much better than he was on Sunday for any chance of winning in Denver, where the Broncos are 6-0 and have scored 35.3 points per game.

After a much more difficult than expected win on Monday night in New York, the Dolphins only have six days to prepare for a home game against the Baltimore Ravens, who are also at 7-5 and fighting for a playoff spot in the AFC.

Miami is hoping to get a little healthier down the stretch, as injuries to Jamar Taylor (seperated shoulder) and Cortland Finnegan (left ankle) at the cornerback position forced the time to start R.J. Stanford on Monday, who was signed last week. With Steve Smith and Torrey Smith (dealing with a day to day ankle injury) being one of the best receiver duos in the league on Baltimore’s side, and both being capable of taking the top off a defense, the Dolphins need to get as healthy in the secondary as possible, and hope Brent Grimes can cover at least one of the Smith’s at a high level the way he’s done with Sammy Watkins, Demaryius Thomas, and Brandon Marshall.

On the offensive side, tight end Charles Clay (hamstring, knee) has missed the last two games, and his presence would be huge against a Ravens secondary that has allowed Drew Brees and Philip Rivers to throw for over a combined 800 yards the past two weeks. Both the Saints and Chargers are offenses that can use a multitude of passing options, as can the Dolphins, especially with a big-time tight end like Clay to attract defenders in the middle of the field the way Jimmy Graham and Antonio Gates did against Baltimore, opening it up for Mike Wallace, Brian Hartline, and Jarvis Landry.

The ineptitude of the Jets and their inability to win, to the point that Rex Ryan said after the game that the team “can’t buy a win”, is exemplified by a few disconcerting stats.

For the first time all season, an elite quarterback and passing game was able to have success, with Aaron Rodgers throwing for 368 yards and two touchdowns, leading to a 26-21 loss at Lambeau Field.

A big part of the reason was Rodgers’ great accuracy and ability to get outside the pocket and make plays, but nickel cornerback Kyle Arrington being out much of the second half forced Darrelle Revis to move to the slot to cover Randall Cobb, Brandon Browner mostly on Jordy Nelson, with Logan Ryan and Alfonzo Dennard having trouble covering rookie Davante Adams (six catches, 121 yards). On a rare occurrence of covering Nelson, Revis got beat on a quick slant for a 45 yard touchdown right before halftime that made it 23-14, helping the Packers get a win.

With the Chargers having three talented wide receivers in Malcom Floyd, Keenan Allen, and Eddie Royal, and a pair of tight ends that are hard to matchup with in Antonio Gates and Ladarius Green, the Patriots need to utilize their depth in the secondary the way they did against Denver, Detroit, and Indianapolis. If they don’t a second straight loss