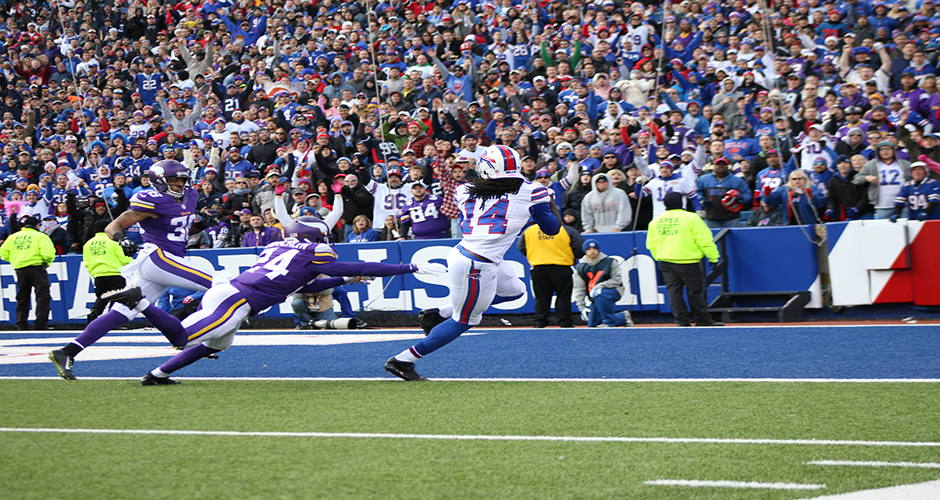 A productive Sammy Watkins has gone a long way in wins and losses this year, as in games in which Watkins has at least 87 yards receiving (including 3 100+ yard games), the Bills are 4-0, but in the games where Watkins has 31 yards or less, Buffalo is only 1-4.

One of Watkins’ best performances this season was in week 2 against the Dolphins and Brent Grimes, when he had 8 catches for 117 yards and a touchdown on 11 targets, accounting for 58% of the Bills’ passing yardage. Miami is currently the second-ranked passing defense in the NFL (210.8 yards per game), right behind the Kansas City Chiefs, who limited Watkins to only four catches for 27 yards on 10 targets this past Sunday.

The Detroit Lions showed that the Dolphins talented secondary  was beatable through the air, though, as Matthew Stafford threw for 280 yards and two touchdowns to one interception, but he had an elite receiver duo in Calvin Johnson (7 catches for 113 yards and a touchdown) and Golden Tate (11 catches for 109 yards) to depend on. For Watkins (617 yards and 5 touchdowns) to succeed this time with Miami focusing on him, he will likely need someone to step up big from the trio of Robert Woods (346 yards and 2 touchdowns), Scott Chandler (307 yards and a touchdown), and Chris Hogan (233 yards and 2 touchdowns) to draw some coverage away.

No team has given Ryan Tannehill more trouble than the Buffalo Bills, as the Dolphins are 1-4 with the third-year quarterback under center against their AFC East rival, and they have lost the three games in which Tannehill has faced off against Doug Marrone-coached squads.

To buck the trend tonight, its safe to say Tannehill must be more accurate and get bigger chunks of yardage against the Bills secondary, which is sixth-best in the NFL in pass defense (224.6 yards per game. But to do that, he will need more time than he has had in the past three games versus Buffalo, in which Dolphin quarterbacks have been taken down a combined 13 times, which won’t be easy due to the fact that left tackle Branden Albert, a Pro Bowler in 2013, is out for the season with a torn ACL and MCL, and guard Daryn Colledge is very unlikely to play.

Ryan Tannehill is 1-4 in five starts against the Bills. He has completed 52 percent of his passes and averaged 158 yards a game.

Cortland Finnegan is out of tomorrow's game against Buffalo. Daryn Colledge is doubtful

With rookie Ja’Wuan James moving from right tackle to left tackle, Dallas Thomas now taking over for James at right, and rookie Billy Turner at left guard for Colledge if the veteran can’t play, a new-look offensive line will have to play against the best defense in the league in taking down the quarterback (NFL-high 34 sacks). The best way to slow the pass rush is to use underneath targets like running back Lamar Miller, tight end Charles Clay, and rookie receiver Jarvis Landry, and committing to the running game, as Miami only 14 yards rushing on 12 carries in the week 2 defeat at Buffalo, including with Tannehill’s legs, as the Dolphins’ 4-1 stretch had the athletic signal-caller rush for between 35 and 49 yards.

In the loss to Detroit on Sunday, Tannehill had two carries for no yards, and was limited to 11 yards on four rushing attempts against the Bills earlier this season. If he can make a couple plays in the run game, it will force Buffalo’s defense to keep a spy on Tannehill and avoid blitzing with man coverage, which will give Tannehill more time to throw and more unpredictability in the offense.

An unexpected emergence on Sunday from safety Jaiquawn Jarrett, who was named AFC Defensive Player of the Week after seven tackles, two interceptions, and a sack versus the Pittsburgh Steelers, helped lead to a huge upset victory over a playoff contender to end an eight-game losing streak.

The move from Geno Smith to Michael Vick has been legitimized, as the 34 year old has been efficient, completing 67.4% of his passes, throwing for 328 yards, three touchdowns to interceptions, and rushing for 57 yards in the last two games. The move for Percy Harvin also has paid dividends, as he has caught 14 passes on 18 targets for 152 yards in the last two contests, and run for 69 yards on 11 carries in his first three games as a Jet.

With no more drama at the quarterback position entering the bye week, and the ability of the Jets’ injury-ridden and inexperienced secondary to hold up very well against a previously unstoppable Ben Roethlisberger, head coach Rex Ryan will have two weeks to put together his best gameplans for the final parts of the season with more confidence in his defense. With four games against divisional opponents (at Buffalo in Week 12, vs. Miami in Week 13, vs. New England in Week 16, and at Miami in Week 17), New York can play spoiler to their bitter rivals in the final part of their season in an attempt for Ryan and general manager John Idzik to keep their jobs long-term despite a difficult season.

The Patriots secondary was able to control Peyton Manning (a league-high 29 touchdown passes, but only two against New England) two weeks ago, and now face the player who is right below Manning in terms of performance this season, Andrew Luck, who has 26 touchdown passes on the year and leads the NFL with 3,085 yards through the air.

New England’s defense has made Luck uncomfortable in the first two match-ups between the two squads, as he has only completed 51.6% of his passes, thrown four touchdowns to seven interceptions in games in which the Patriots outscored the Colts a combined 102-46. But both games were in later portions of the season (November 2012 and the divisional playoffs last season) and at Gillette Stadium, where as this one will be in the comfortable set up of the dome at Lucas Oil Stadium.

While Luck had two touchdowns and three interceptions in a 43-22 defeat against the Patriots in the second round of the postseason, he only had T.Y. Hilton (937 yards and three touchdowns this season) and Coby Fleener (295 yards and four touchdowns) as dependable targets. This season, Reggie Wayne (504 yards and 4 touchdowns), Dwayne Allen (374 yards and 7 touchdowns), and rookie Donte Moncrief (7 catches for 113 yards and a touchdown against the Steelers on October 26) give Luck more weapons in the passing game, and the two-headed monster of Ahmad Bradshaw and Trent Richardson give the Colts the 14th best rushing offense (113.8 yards per game), compared to 20th last season.

The speed quickness of Hilton, along with the consistency of Wayne are a combination the Patriots will have to gameplan for, and it may take more than one defender to stop either one, though New England has a loaded secondary with Darrelle Revis, Brandon Browner, Logan Ryan, and Alfonzo Dennard at corner to go along with Tavon Wilson, Patrick Chung, and Devin McCourty at safety. With both teams coming off a bye, look for some unexpected play calls from both Indianapolis offensive coordinator Pep Hamilton and Bill Belichick in a chess match to see which AFC contender makes the biggest statement in their return to the field.