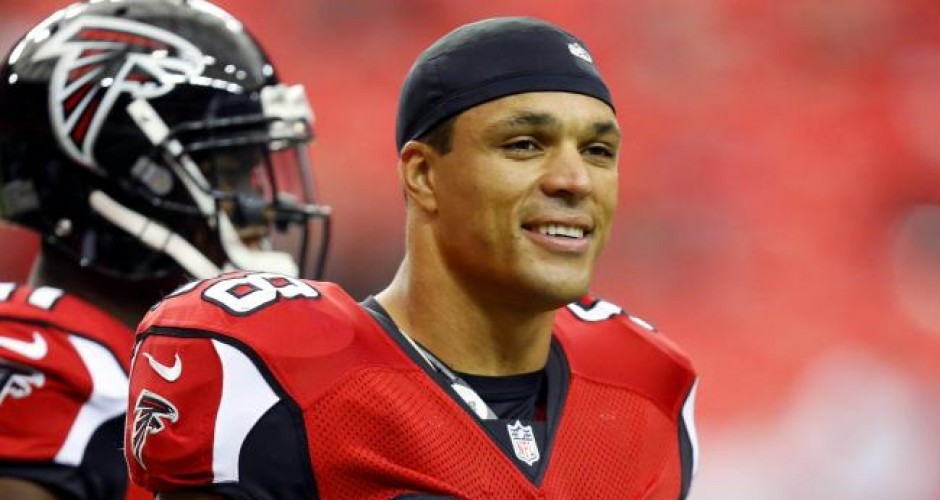 Gonzalez, who played a position that called for him to not only block titanic linemen but also run precise routes and catch the ball, he had 1,149 receptions. Second only to the mythic Jerry Rice.

He may have not had the yards, the touchdowns but he had the hands to be the most reliable weapon possible for his quarterback.

Not Andre Reed, not Terrell Owens, and not Randy Moss have had more seasons of 50 or more catches. Gonzalez reached that mark in 15 of his 16 seasons. The only season he had less then 50 receptions came in 1997, his rookie season with the Kansas City Chiefs.

But it is not a numbers game that tells the story of Tony Gonzalez. It is not the 13 Pro Bowl appearances (he is the game’s all-time leader in receptions and touchdowns) or the 10 All-Pro honors. All of the accolades, are the byproduct of what truly defines Tony Gonzalez — his commitment to excellence.

After not starting a single game his rookie season, Gonzalez went on to play and start a total of 238 games out of a possible 240.

Even in his time in Atlanta, Gonzalez continually worked at being the best he could. Which showed as in this, his presumed last season, Gonzalez put up his best numbers in four years with Atlanta — 92 catches for 930 yards and eight touchdowns.

“His statistics are incredible,” Atlanta coach Mike Smith said in December. “That comes from his work ethic at practice.”

“[H]e had a phenomenal work ethic. You cannot outwork this guy,” Peterson said. “He had a goal of being the best tight end in the NFL, and he was never content with the success he had the previous year. He’s still working as hard today as he did when he first came to our camp.”

It’s always a numbers game in sports, but if not for the gritty play that goes unnoticed the numbers wouldn’t exist. That is the remarkable thing about Tony Gonzalez. He has the numbers and the gritty unnoticed play.

“You know you can call any play with Tony blocking because his man is not going to make the play,” said Shannon Sharpe, a hall-of-fame tight end himself.

It always comes back to the commitment of excellence for Gonzalez, who studies the biographies of athletes and coaches, as well as pivotal figures in business and military leaders. Always studying, searching for the uniform element in all of them that led to their greatness.

For all the greatness and commitment to excellence, it took a while for it to payoff.

The hunt is for the Super Bowl, to hoist the Lombardi Trophy over your head in front of millions of eyes with family by your side. Yet, the road to that perfect moment leads through the playoffs. Something that had eluded Gonzalez till this, his 16th season.

After blowing a commanding first half lead over the Seattle Seahawks. Gonzalez saw his perfect moment once again evading him.

“I was thinking here it goes again. I guess it just wasn’t meant to be,” Gonzalez said choking back emotions after the game. “I guess this is it, I’m going out with a heartbreaking loss.”

The Falcons would really with mere seconds on the clock. Gonzalez would not only be one step closer to his perfect moment but also accomplished a new feat — winning a playoff game.

“After 16 years, never winning a playoff game, I-I never cried after a win,” Gonzalez said. “For us to comeback the way we did, I’m so proud of our guys, everybody stepped up when we had to and made plays.”

“It’s probably the last time I’m going to wear the uniform,” Gonzalez said after the game, choking up. “I didn’t want to take it off, to tell you the truth. All good things come to an end and like I said all season long, this is probably my last one. What an unbelievable ride.”

While he may never take to the field again, his imprint on the game will forever be there.

Teams around the league now search for tight ends in the mold of Gonzalez — hybrid athletes with basketball backgrounds which Gonzalez also played while at Cal-Berkley. It is because of his prototype that we have been introduced to players like Antonio Gates and Jimmy Graham.

It is because of his reputation as such a reliable blocker and receiver that Rob Gronkowski is compared to Gonzalez.

This past Sunday we may have witnessed Tony Gonzalez’s final game but over the past 16 years we also witnessed the player of a generation.