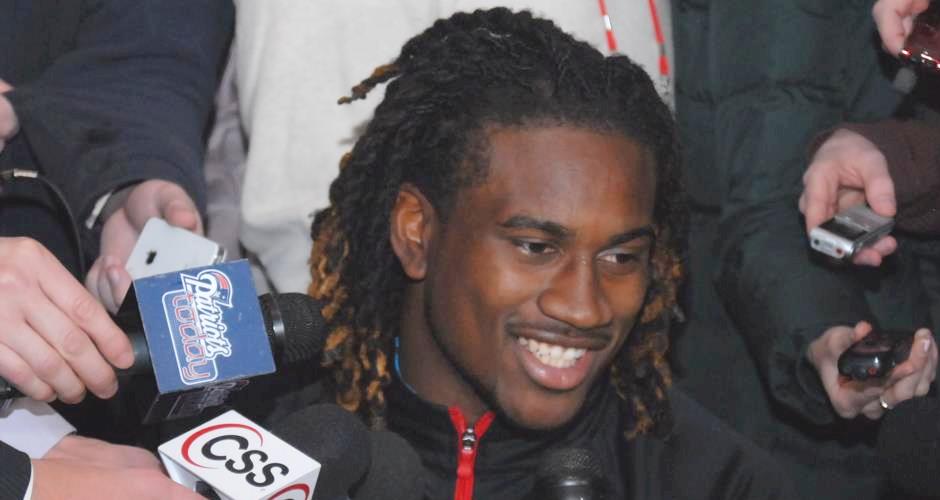 The NFL scouting combine is a week-long event where college football players get to showcase their physical and mental prowess for scouts from all 30 NFL teams. Their speed, strength, agility and athleticism are tested in various drills and workouts such as the 40-yard dash, bench press, 20 and 60-yard shuttle, vertical jump, broad jump, and three-cone drill. Interviews are used to examine character and the wonderlic test assesses problem-solving aptitude. But in order to perform well, you have to look good. Have you ever heard the saying, “Look good, feel good, PLAY WELL?”  While scouts were critiquing performance, I was critiquing hair,and here is who stood out.

Before we go into any individual praise, I want to first acknowledge a trio of teammates from two SEC rivals that made it a priority to look good before they played well.  After all, football is a team sport, meaning the better your team looks, the better they’re going to play.

We know what made Alabama the most dominant team in college football in 2012; great defense and even better hair (Okay maybe the defense was better). Throughout their championship season, Jarvis Jones, Eddie Lacy and Robert Lester all had flowing, well kept, clean dreads. Looking for a way to stand out from what seemed to near 100 combine participants with dreadlocks, Jones and Lacy decided to add a little twist to theirs. Jones went with complex braids that looked like a mix between corn-rows and dreadlocks, while Lacy’s hair was artfully twisted, weaved and crossed. I don’t know how their barbers did it or what to call it, but whatever was on their head looked awesome. Lester on the other hand, stuck with his shoulder length dreads and for good reason; you simply can’t mess with perfection.

The Gamecocks showed out at the combine with three fantastic dread heads. First was strong safety D.J. Swearinger (No, he can’t man the turntables and make your prom bump. That’s not his disc jockey name, that is his real name). Swearinger’s dreads are the perfect length, reaching the bottom of his neck are beautifully tailored and the thick twists in the front look sick. Ace Sanders, a wide receiver has extra thin dreads, which gives them added mobility and makes him look even cooler when he skies for a catch and they  fly freely in every direction.  MVP Hair of the gamecocks though is defensive lineman Devin Taylor, not because his hair looks the best, but simply because it’s garnet and sticks straight up.

While the mohawk seems to be slowly fading in popularity, there are usually always at least one or two present at sporting events. The two at this year’s combine belonged to Oregon’s Kenjon Barner and Oklahoma’s Kenny Stills. In my opinion, a mohawk’s quality is measured in it’s height, so the fact that the hawks sitting on top of Barner’s and Stills’ heads were virtually the same height made this a very tough call. Stills’ mohawk was the same width throughout though, while Barner’s gradually faded in, giving it a sleeker, more symmetrical look. For that reason I have to give the edge to Barner, but both were well executed. Thanks for keeping the mohawk alive fellas.

The afro has become a lost art among African and African-American athletes because as soon as it gets to a reasonable length, they’re quick to tone it down and braid it up. Ziggy Ansah, a defensive end out of BYU, and Chris Faulk, an offensive lineman hailing from LSU don’t seem to have any plans to tame their hair. Both looked like they rolled out of bed and rolled into Lucas Oil Stadium, and both pulled it off marvelously. Ansah looked like he cared less though, so I’ll give the edge to him.

Before you can run, you have to learn to walk. Before you can have dreads like Denard Robinson, you have to start like Desmond Trufant. He should be in any hurry to grow his out though; I don’t think “shoelace,” or anyone for that matter, has ever had a cooler hair picture than this.

I know I’ve talked a lot about dreads in this article, but it’s hard not to when just about every other player has them. Minnesota quarterback Marqueis Gray and Michigan quarterback Denard Robinson (who was listed as a wide receiver at the combine) have obviously been working on their long locks for quite some time, and their dedication has certainly paid off. With their locks flowing down to the top of their jersey number, both players look awesome, but I have to give the slight edge to Gray, whose dreads are a little more thick and full. I can’t help but wonder if they played a role in his mediocre 4.73 40-yard dash time, which was .3 seconds slower than Robinson’s.  Whatever the reason, he looked really cool.

This is where the white guys get their first chance to grace our list. Without the hair genes to be extremely creative, the white male’s only shot at “best hair” is to let it grow and see what happens. Duke wide receiver Conner Vernon and UCLA offensive guard Jeff Baca did just that, but with differing results. While both look fantastic and should be praised accordingly, I give Vernon’s “sunshine” look a leg up on Baca’s crazy curls. Don’t believe the “long hair, don’t care” motto though, achieving the perfect flow takes a ton of time and patience. Trust me, I’ve been trying to get on Vernon’s level for the past 10 months. I salute your perseverance Conner.

And the winner is…

Of all the different cuts and styles rocked by combine participants this year, two stood out to me for one simple reason: blonde tips. I don’t know what it is, but black hair with bleached ends gets me every time, probably because it looks flat out SICK. When Illinois cornerback Terry Hawthorne and Tennessee wide receiver Cordarrelle Patterson showed up with awe-inspiring braids with golden tips, it was game over. Hey Cordarrelle, are you from Tennessee? Because you’re hair is the only ten I see. Nailed it.

These guys don’t need an explanation. Their hair speaks for itself.

Star Lotulelei – His name is Star. How could I not include him?