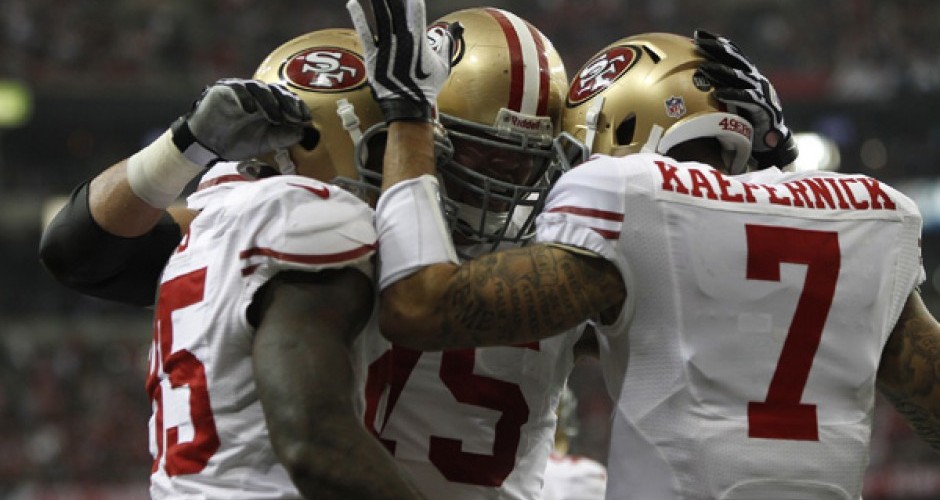 Every game has a few tipping points for the winning team. The NFCCG was no different. Just bigger.

All throughout the game, Ryan tried to get the 49ers to jump offsides to gain easy yardage. Several times, he tried it when the Falcons were facing 2nd/3rd and less than five yards, and would have resulted in a cheap first down had the defense fallen for it. The 49ers defense did not bite on any one of Ryan’s hard counts, and were able to get critical stops.

A seemingly simple task, kick returning, ended the 49ers season in the last NFC Championship Game. Against the Falcons, Ted Ginn was given that task, and he faced pressure right in his face on a few punt returns. Falcons players were right up on him, close enough to touch helmets, while he waited for the suspended ball to come into his arms. But Ginn did not fumble one punt, and he helped keep the game’s momentum from swinging back to the Falcons.

Five minutes left in the 2nd quarter. The 49ers had gotten the ball back after scoring on their previous drive. A big play to start this drive was negated by a holding penalty, which forced them into a 1st and 19 situation. After a small gain, they were now at 2nd and 16 when Kaepernick found Vernon Davis, who broke a tackle and got the first down. Had that pass been incomplete, they would have been facing a 3rd and very long 16 and probably would have had to punt it away, sending their already tired defense back onto the field.

Instead, Kaepernick extended the drive and led the team down for their second touchdown, this one a short pass to Davis who took it into the endzone.

2. Frank Gore gaining a first down on the 49ers third possession.

With the game on the very brink of getting out of hand, the 49ers were desperate for something. On their third possession, down 0-17, they had gone three and out on their previous two drives. On the first play, Gore ran it up for 9 yards, and then gained a first down on the next play. Subsequently, the 49ers were able to take a bit of momentum away from Atlanta’s defense, and started going into their now-famous “Pistol” formations. Kaepernick led the team down the field, and rookie LaMichael James finished off the drive by scoring his very first NFL touchdown, brining the 49ers to within a manageable 10 point deficit.

Had they gone three and out again, the Falcons – with all the momentum – could have driven down the field against an exhausted defense and put the 49ers in a 0-24 hole.

A gigantic turnover early in the 4th, when 49ers WR Michael Crabtree was stripped literally five inches from the goal line, ended the 49ers chance of taking the lead. With the Falcons backed up deep on 3rd down, Ryan completed a pass to Tony Gonzalez, but Gonzalez was pushed out of bounds short of the first down by Carlos Rogers. The Falcons were forced to punt, and the next 49ers drive resulted in the game-deciding touchdown.

Had the Falcons gained the first down, they would have gained a huge upper hand and the momentum. But with Rogers critical tackle, the momentum from Crabtree’s turnover was quickly stymied and the 49ers regained the control.